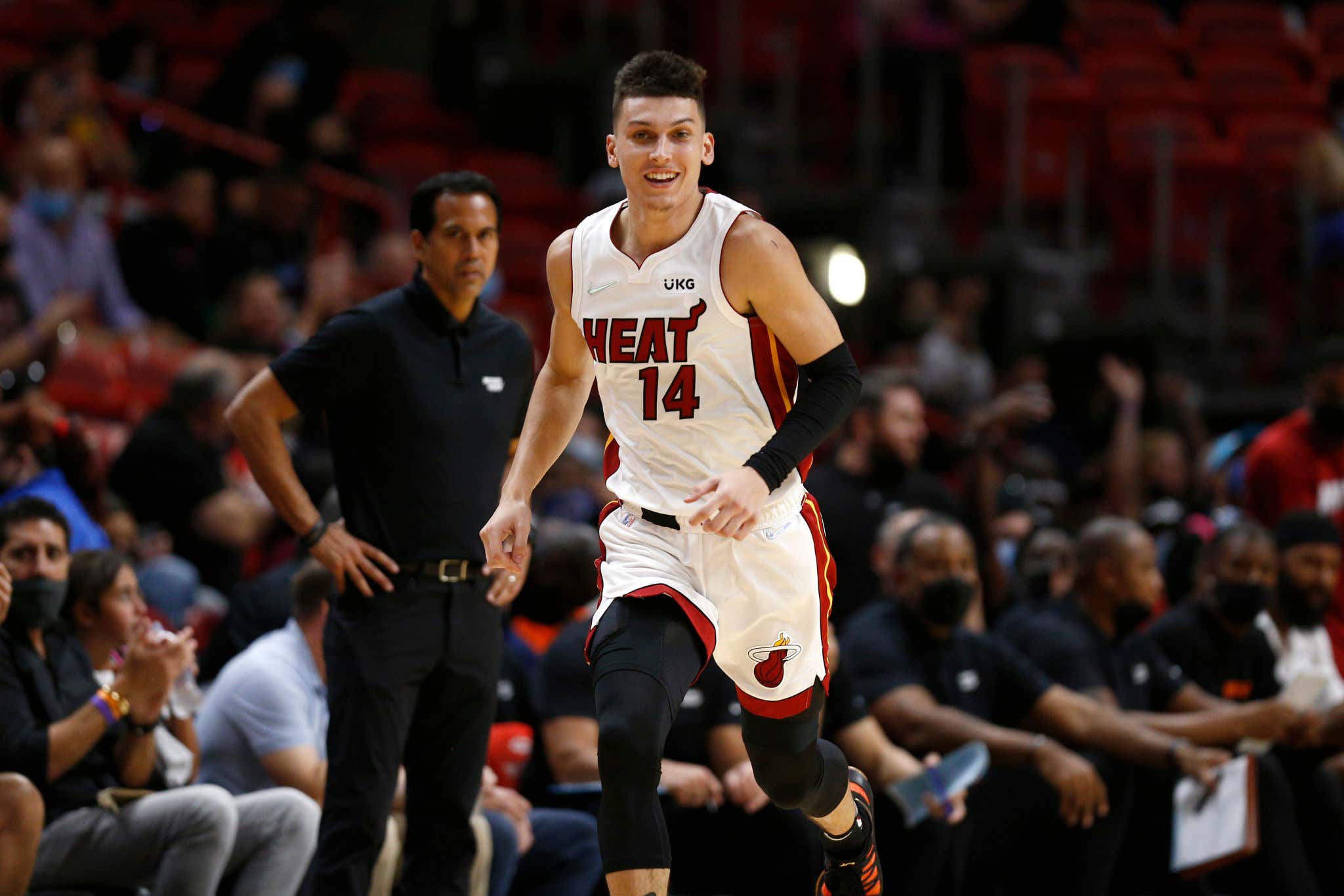 With the preseason truly getting going last night with 9 games, I have to say it was amazing to have basketball back in our lives again. Even if they are truly fake games that don't matter, who cares. Having any form of basketball to watch is always going to be better than not. At the same time, the beauty of the preseason is that you can apply similar rules to these games as you do for Summer League. Basically, anything positive you see will absolutely translate into the regular season while you can ignore anything bad you see because the games are fake. It's really a win/win as a fan.

You look around the league last night and there were a ton of performances that should have fans of those teams excited. As long as you remember to take everything you see with a grain of salt because these games do not count, it's perfectly fine to be hyped about someone on your favorite team looking great. Sometimes that really can be a look of what's on the horizon, so I wanted to take a minute and highlight some guys that definitely stood out to me after our first look at live game action

This is a pretty huge year for Tyler Herro. He had himself a fantastic bubble, and then backed that up with a pretty underachieving second season. While ultimately their ceiling will depend on what Butler/Bam/Lowry can do, there's no denying that Herro has the potential to be a difference maker for this Heat team if he truly takes a Year 3 leap. I wouldn't blame Heat fans for thinking that might be possible after watching what he did last night

This was the shooting/caliber of play I feel like Heat fans were hoping to see last year. Herro looks bigger, but this added muscle doesn't appear to have messed with his shot. The big thing will ultimately come down to his defense, but Herro looks like a prime candidate for a 6MOY award if he plays like this. He obviously started last night because Jimmy Butler got the night off, but if you were hoping to see a leap from Tyler Herro this year, last night was like crack for you.

Maybe you thought MPJ's "max" extension was a little much. He broke out last year and proved he can be a stud offensively with an expanded role, and that's now even more important with Jamal Murray sidelined with his ACL. If this is what an expanded MPJ looks like

The impressive thing was his 60/60% shooting splits. If you're looking for a prime candidate of the typical Year 3 leap, MPJ has to be at the top of your list. Not just because of his skillset, but his opportunity. Someone is going to have to step up and be that #2 option next to Jokic. It wouldn't shock me if we saw MPJ live around the 16-18 FGA range, which means we could see him up to around 22-24 points a night. That would be huge, and it's safe to say he looks comfortable in this new role.

Sticking with the Nuggets for a second, I want to shout out Bones Hyland. He was one of my favorite players to watch while in Vegas, and it sure looks like things are translating to the real thing

Ask any Nuggets fan how important their point guard play is. It's arguably the one main hole on their roster. If preseason is a time to get overly excited about a young rookie on your favorite team, Nuggets fans have every reason to be all in on Bones. It hasn't mattered where he's played so far, he's been a bucket. It's be interesting to see if he's ever able to crack Mike Malone's rotation because the talent is clearly there.

He's still very raw in terms of his talent, but Raptors fans are for sure hyped up this morning about their new prized rookie Scottie Barnes. He had himself quite the debut against the Sixers

and you can see why the Raptors were in on him at the draft. He was everywhere last night. Getting some legit wing help on this roster is important given the division and conference the Raptors play in, and so far it looks like Scottie Barnes can hang. You combine that with the development of OG and hopefully Siakam getting back to his All Star form, and there's reason for excitement as a Raptors fan. They got killed for passing on Suggs, but Masai Ujiri might know what he's doing.

You want to talk about Year 3 leaps? May I interest you in Jordan Poole

We've heard the Warriors talk about how they have a need for some additional playmaking at the guard spot, and from the looks of things Jordan Poole is poised to take that opportunity and run with it. We saw some nice improvement in his Year 2 where he was able to bump his scoring up by over 3 points and his shooting to a 43/35% clip coming off the Warriors bench, but looking at their roster, I see no reason why he can't continue to start next to Steph until Klay gets back. Especially if his shot is going to be that pure. He looks like a player that's even more comfortable in the Warriors system now that he's entering Year 3, and Warriors fans already started to get excited about this guy last year. If he can give them similar performances to this? The GS hype machine will reach new levels.

With Klay out until probably around Christmas, Otto Porter Jr has a real opportunity to make a real impact on this Warriors roster from the wing spot. The thing is, who the hell knows if he's any good. He's always been hurt, his situations haven't been the best, but based on what we saw last night in his Warriors debut, I'm thinking he can find a fit

His role is pretty simple. Get to an open spot and knock down catch and shoot threes. He was 4-7 from deep against the Blazers and looked pretty healthy for the most part. You have to remember that GS bump. Almost everyone looks better playing in that system and next to Steph. Look at what it just did for Andrew Wiggins. If Otto Porter Jr can find a way to stay healthy, he'll be effective.

This is a big time pressure season for the Pelicans. They need their new head coach Willie Green to pan out, they need Zion to continue to improve, and they need to show him that they are making real strides towards becoming a playoff team. They also had a very questionable summer in terms of trades/free agency, so it's important they nail the draft. Well, here's how Trey Murphy III did in his debut

The Pelicans desperately need to find ways to create space around Zion, and if Murphy can light it up like that, he may be a potential solution. The Pelicans were 27th in 3PM and 25th in 3P% last year, so adding a guy that can step right in and go 6-10 from three has to be a welcomed sight for Pelicans fans. They also got a really nice performance from Nickeil Alexander-Walker so keep him on your radar for a much improved 3rd season. He took a mini leap last year when he saw his minutes jump from 12 to 22, so both of these young guys looking so poised and comfortable at the NBA level will be crucial.

In terms of Murphy, he could definitely be that floor spacer the Pelicans desperately need.

We all know the Thunder are going to be bad, mostly on purpose. That doesn't mean their fans don't have a reason to be excited though. With SGA back in the lineup we got to see what that looks like next to their prized rookie Josh Giddey, and I have to admit I am intrigued.

What stood out right away was his size. He's big as hell for a point guard and you can see how he utilizes that size to get the most out of his playmaking. I'd argue it's hard to have a better debut than what Giddey gave the Thunder last night. It wasn't just his line, but it was his efficiency as well at 8-12 shooting. I will say this about the Thunder. While they may not win a ton, they do have their fair share of intriguing prospects. Lu Dort, SGA, Poku, Giddey, that's a fun rebuilding group you can get behind as a fan. Especially is one of these international guys pans out. I think there may be something to be said about these guys coming over from the Australian league, because both Giddey and LaMelo Ball looked ready right away.

I'll state it again, of course this is preseason basketball so take it with a grain of salt. But if you're a fan of one of these teams, don't let that prevent you from getting excited. That's what this time of year is for. I didn't even mention guys like Cam Thomas, James Bouknight, OG Anunoby, Josh Primo, Cole Anthony etc. The talent in the league feels like it's never been better, and that's what makes these fake games so much fun. With only a few more weeks to go until the real thing kicks off it's getting harder and harder to contain my excitement.