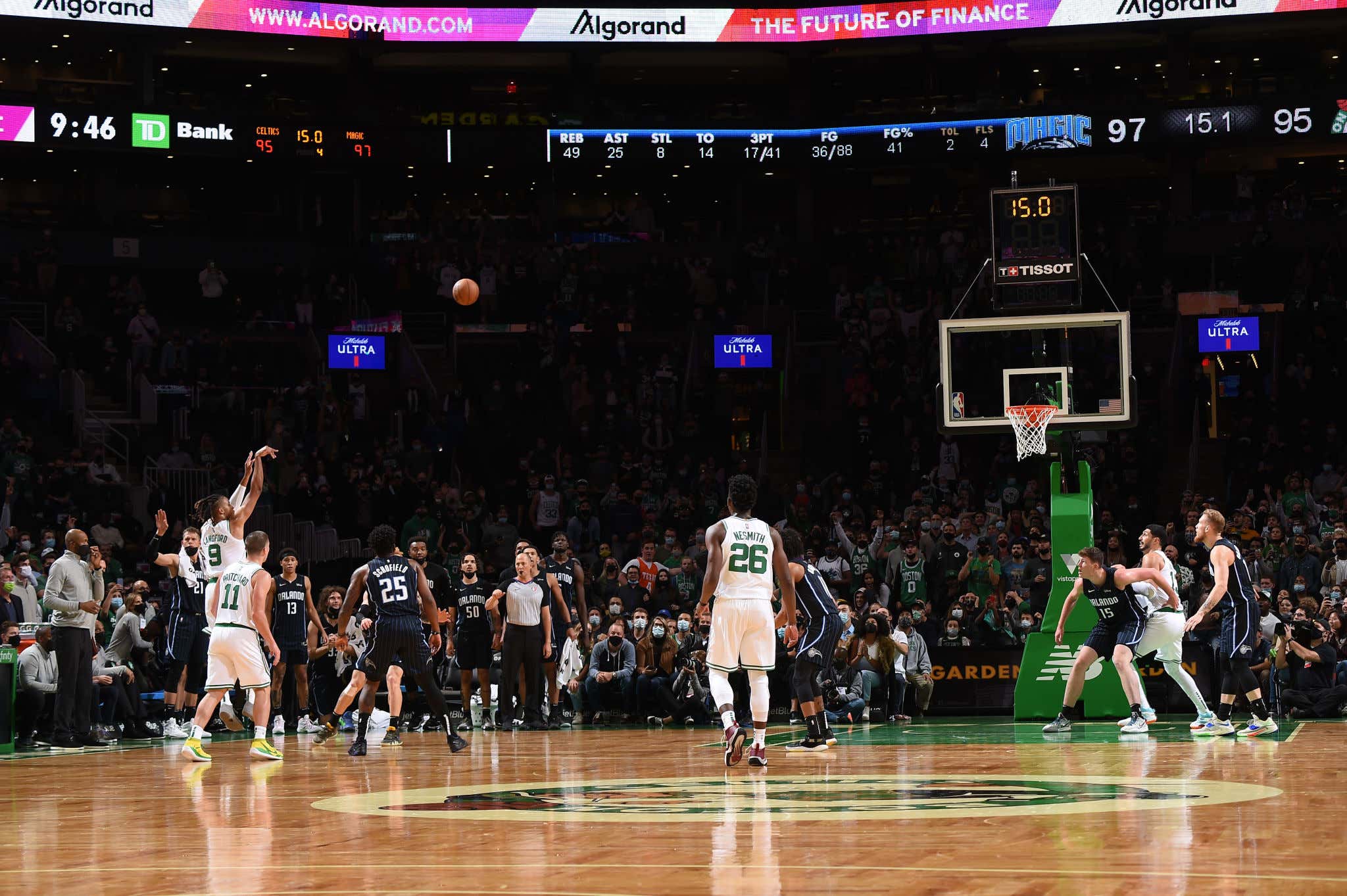 Was that the first preseason game of Game 7 of the NBA Finals? It's hard to say really. While my brain reminds me that this was a fake game that does not count towards the Celts actual record, it doesn't feel that way to my heart. That shit was stressful as hell. The crowd was electric like we were in a playoff series. It was everything I had been hoping for as I counted down the days until Celtics basketball was back in my life. It was also very on brand that this team put us through the torture chamber on their very first opportunity. As we know, watching this team play is emotional warfare. You're going to experience every emotion under the sun on a nightly basis whether the games count or not. So the fact that they gave us a heart attack in a down to the wire game in Preseason Game #1 is very on brand. You had to know it was coming. Tell me if you've heard this before while watching this team play. They look great to start but can't pull away because of turnovers. Then their opponent starts to make a ton of outrageous threes and pulls away, getting up by as much as double digits. Then, in an awesome fourth quarter sparked by energy and effort, the Celts came through at the end in dramatic fashion. It's a script we've seen a billion times before.

And the thing is, I'm not totally sure that's a good thing. If we're being honest with ourselves, I saw a lot of the 2020 Celtics in this game last night, and not really the good parts. A lot of the issues that plagued this team last year still showed up. The same frustrations. The difference last night is they did something about it and responded when it mattered most. They didn't just cave and lose to another terrible team. But overall, it looked a lot like what we saw last year and that's something to note as we continue to ramp up to the regular season.

But last time I checked, it was better to win preseason games than lose them. To get it on a Romeo game winner is just icing on the cake. We have a lot to get to, you should know by now that all these games matter to me so we may as well dive in.

- I couldn't wait to see Jaylen play last night. It felt like it had been forever since we've seen him and it took about 2 seconds for him to prove that he was ready to roll. Not to be dramatic, but he looks better than ever. He's slimmed out, his handles look like they are continuing to improve, and he was showing no signs of being limited by his wrist at all

Jaylen nearly outscored the entire Magic roster by himself in the first quarter, finished with 25/4/3 on 8-16 shooting while leading the team in FTA at 6. The best part of this performance was clearly the fact that he was only operating at 80-85%. Those are his words not mine

So I'm to believe Jaylen can…..get even better? Where do I sign up for that? How many times can I write my name? What we're learning is that Jaylen should probably be the main option to start off games. We know Tatum starts slow and finishes strong, but Jaylen repeatedly shows he's ready to roll right from the tip. I'll remind you, last season Jaylen led the team in first quarter scoring at 7.1 a game on 48/44% shooting. That's why his 16 points in his opening 8 minutes was no surprise. This is what Jaylen does.

I also don't exactly hate that he led all starters in assists as well. We all want more playmaking out of the Jays, well last night we got it.

- Speaking of the Jays, it took a while for him to get going but Jayson Tatum had his moments as well

The 6-16 from the field wasn't what I would call great, but I only had 1 or 2 possessions where Tatum got stuck in bad iso offense. I thought he was aggressive and played into contact rather than avoiding it, his rebounding was legit (9) and on the defensive end he held his own. Lead the team with deflections and steals, what I liked was the fact that he didn't let his poor shooting start impact his defense. That's growth. If you've watched Tatum develop you know what I'm talking about.

- Ime talked all summer about better ball movement and right away we saw a difference.

It got to the point where they were probably overpassing, but I'll take that problem every day of the week. There were times when the overpassing resulted in a turnover which is bad, but you know what? I'd rather see a turnover as a result of trying to pass than a turnover off some bullshit isolation offense where a guy dribbles for 20 seconds. In total, they finished with 19 assists on their 31 makes , every starter outside of Juancho had at least 2, and then Dennis and Pritchard had a combined 9 off the bench. It's the preseason of course, but this is what I was hoping to see. The ball moving side to side, guys passing up good shots for great shots, stuff like that. Had they been able to hit a jumper most of the night, I imagine those assist numbers are even higher.

- This game changed in the fourth quarter, and the Celts can thank Aaron Nesmith for it.

What you saw from Nesmith in this game is why there are some of us out there that think his role is to eventually start at the wing for this team. His outside shooting was as legit as we saw in Vegas (where it was lights out), his energy was once again off the charts, and his own personal 8-0 run in the fourth is what got the Celts back in this game. We've seen him make the hustle plays before, but now he seems to be hitting the big momentum threes as well. That's all I ever wanted from Nesmith. If the Year 2 version is going to give the team this level of play on a consistent basis, he's going to start at some point.

Their roster desperately needs someone to step up and  show they can be a consistent floor spacer while not dropping off defensively. Nesmith is definitely giving off that vibe to start the year.

- I was actually pretty pleased with what I saw from Dennis Schroder despite the fact that he finished 1-7. He came in right away looking to pass and create for his teammates. His defense was as advertised, and I thought he came in and played with great energy. I'm pretty sure his layups will come around, but that's the type of role this roster needs from him. Come in, play fast, get guys involved and score when you have your opportunities.

- The same is true of Horford. He was much better than I remembered at staying with quicker guards and challenging shots at the rim. I guess he wasn't lying about those fresh legs.

- Alright, let's talk about Romeo. You may say these games do not matter, but for Romeo they are extremely important. He has to show he not only belongs, but that he's developing and worthy of actual minutes. Rocking a new number and a reworked shooting form, he came right in and knocked down a three which was a surprise. There was no hesitation in his jumper. He then obviously had the biggest play of the game coming up with that game winning steal and three. It was a moment that we'd seen before, just a few months prior

This is why I always say that all these games matter. Romeo clearly felt comfortable in that end of game situation because he had just gotten reps in one. There was no hesitation on his three last night to win the game the same way there wasn't on that Vegas game winner. I'm not sure what his role is going to end up being, but if he keeps playing like this there will be minutes for him.

- Thinned out Grant actually looks……OK? Way more active on defense, didn't make too many boneheaded mistakes, knocked down his open three. That's all I want from Grant. If this version can look more like his rookie year and nothing like his sophomore year, we may have something in terms of a reserve big.

- If watching this team go long stretches without scoring didn't give you PTSD, you are very lucky. You can't tell me things didn't feel like last year for a large portion of this game offensively. Nobody could make shit. As a team they finished 35/35% and this was with the starters playing the first three quarters. The 6-16 from Tatum, the brutal 0-7 from Rob, Smart at 2-6. Then the bench comes in and it's no better. Schroder/Pritchard combine for 4-16. Josh Richardson's jumper looked gross and none of his shots were even close. The shooting concern did not go away after last night's performance that's for sure.

Of their 91 FGA, 40 were 3PA. We'll have to see just how different Ime's offense ends up being, because that looked like a Brad offense to me outside of some better passing early.

- Back to Rob for a second. Wayyyyyy too much falling in love with his midrange jumper which he never made compared to rolling hard to the basket. That'll be adjusted I imagine. It's just not where Rob's strengths are. Those are Al Horford shots in my opinion. He was awesome defensively, but offensively it was maybe the worst game I've ever seen Rob play.

- Ime will quickly learn that the second you put in Enes Kanter, teams are going to eat him alive in the P&R with their smaller and quicker guards. He's BBQ chicken every single time. I'm sure he tries, but it doesn't matter. You get Kanter in space, it's a wrap. That hasn't changed at all since his first stint.

- Allowing 17 3PM to one of the worst three point shooting teams in the league last year wasn't exactly what I loved to see, but it was entirely predictable because everyone who sucks suddenly becomes Steph Curry against this team. It's amazing really while also being extremely frustrating.

- They finished with 16 turnovers, but it felt like way more. While some came from over passing, the majority of them were just bad, lazy plays. Getting the ball stolen before you even put it on the floor. Dribbling off your foot. Lazy passes that are immediately intercepted. Shit like that. I mean they had 8 TOs in the first 12 minutes. That's gross. I get that playing faster might lead to turnovers, but that's not what we saw. We saw awful turnovers in the halfcourt. You do that shit against any sort of good team, there is no game winner for you at the end.

- I dunno about Josh Richardson. It feels odd to say that after just one preseason game, but I think I'd be OK if he just never shot the ball and only defended. His jumper gives me anxiety. I just have zero confidence watching him take a jumper. It wasn't the best Celts debut for him, I certainly am not sold at giving him minutes over either Nesmith or Romeo, but it is early. I'm willing to give him time, but in terms of a debut…woof.

I dunno if other games were like this, but the energy in the Garden was electric. This did not feel like a fake game even though it very much was. Just imagine what things will be like once they count.