The Dream of an uNDefeated season is dead. I think deep down we, the faithful, were nervous going into the season. We knew there would be some level of drop off when losing the program's all-time wins leader, four starters on the offensive line, and high draft picks on defense. The flip side of that coin was the confidence that the Brian Kelly era had built. Notre Dame has matriculated guys to the NFL a lot in recent history. There are 38 Notre Dame alums in the NFL right now. When those guys moved on recently...It hasn't mattered. Next man up. Next all-american to step in on the way to a 10+ win season and playoff contention.

This team felt different and it felt different right away. And by different I mean significantly worse. ND escaped in Tallahassee with an OT win against a bad Florida State team. They were lucky to beat Toledo at home. Purdue was a speed bump. The Irish blew out Wisconsin with defensive scores late in the 4th that helped hide the fact that the Irish had negative rushing yards on the day. Not being able to block anyone was going to catch up to the Irish eventually and on Saturday it was Cincinnati. It could've been FSU or Toledo before. It could've been VaTech, UNC, or USC later. Someone was going to beat ND because the offensive is stuck in the mud all year long.

Stuck in the mud despite having two running backs with NFL futures, talent at the WR position, serviceable quarterbacks, and the best TE in America. You can call it a transition year because there was so much turnover, but even though ND planned on starting a true freshman at Left Tackle the Irish had plenty of experience up front. From left to right the Irish starting offensive line goes Sophomore, Junior, Senior, Grad, Grad. These guys aren't "green" even if they're new starters. These guys...just aren't what we've seen the last 7 years or so from Brian Kelly teams. In the past the Irish would lose a Ronnie Staley and immediately stepping in would be a Mike McGlinchey. You lose Martin and here comes Quenton Nelson. Brian Kelly made Notre Dame a factory for offensive linemen. Notre Dame currently had TEN alumni on NFL active rosters. Now they can't even bully a MAC school.

If you're wondering what changed...it wasn't the recruiting. I am not an expert on the ins and outs of the ND program. I am not in the meeting rooms or at practice. There's only one thing that visibly changed from an era of dominance up front to what we see now. One man, actually. 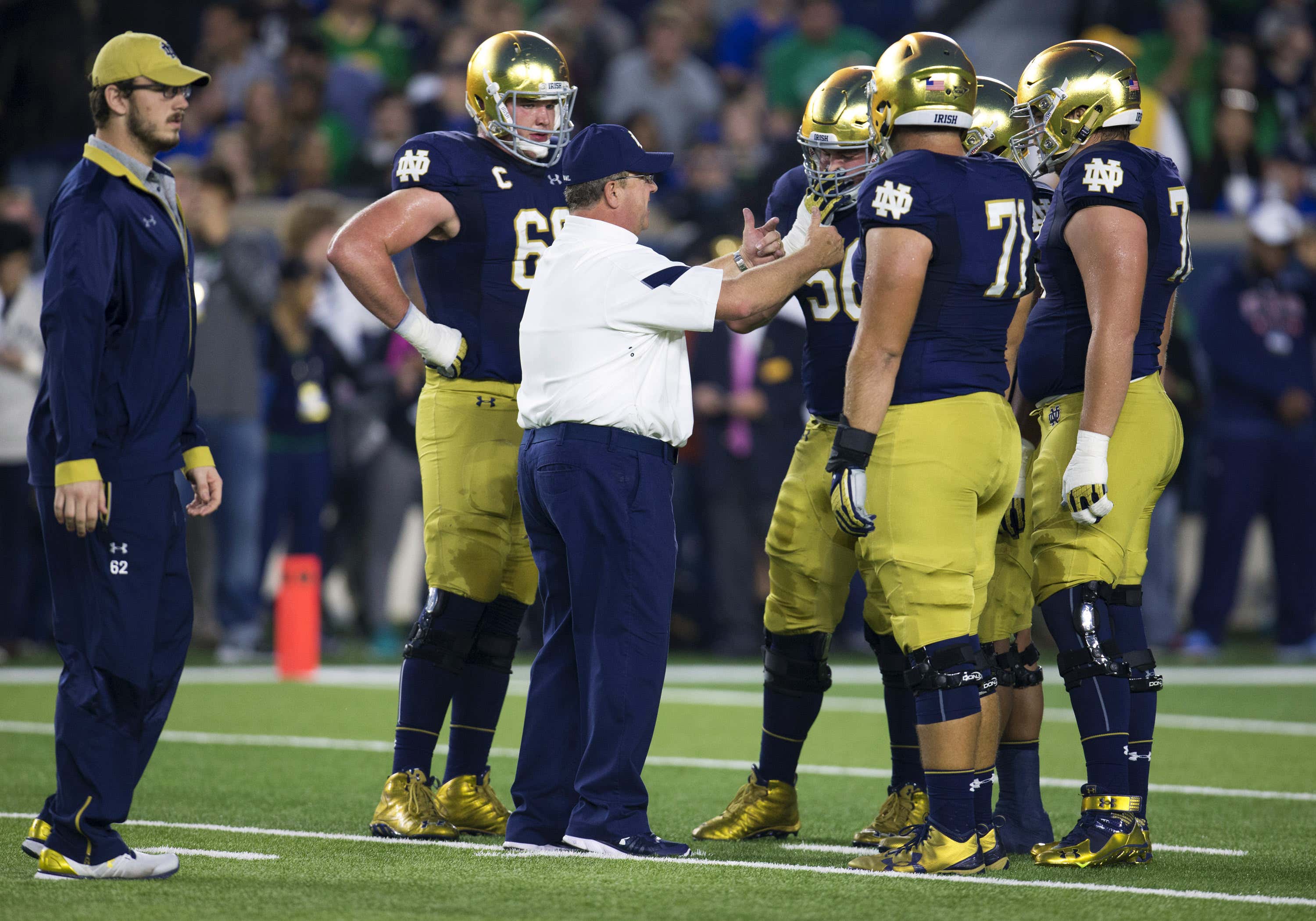 That is Harry Hiestand coaching up a group of NFL guys. Hiestand left for the Bears after the 2017 season and now for the first time the Irish offensive line is made up of guys who were never coached by him and it shows. I don't know anything personally about Jeff Quinn other than what is on his wikipedia. He's spent a lot of time with Brian Kelly. He linked up with him at Grand Valley State, Cincinnati, and he's been with ND in various capacities since 2015 after he got fired by Buffalo after four years as their head coach. I also know that there are alumni who have soured on him. Former ND linemen alumni to be specific.

I also know that Hiestand is just chilling right now still collecting checks from his time with the Bears. There are rumors that he could end up with the Colts next year. There are also rumors that he could return to ND. I would be willing to start a gofundme to get him back in the program immediately and I think the fundraising efforts would be overwhelming. Notre Dame has always been able to lean on their big fellas upfront to keep themselves in games and keep themselves in playoff contention. Now it feels like it has been flipped. They can't just impose their will on teams and shorten games by going on long drives with a rotation on running backs hitting holes a truck could drive through.

Notre Dame currently has the 2nd ranked recruiting class in the country and their top two rated recruits from the last cycle were Blake Fisher and an interior lineman named Rocco. Bring back Harry Hiestand and let him get his hands on these boys so the Irish can get back to where they belong which is in the top 10.