Buried the football this week after a disastrous week 3 thanks to the Colts and Raiders not covering, and the Steelers stinking up the joint.

Doesn't matter what you measure or assess a team by when handicapping the NFL, the first 2 or 3 weeks aren't going to give you a definitive picture of a team's true identity.

As Bill Belichick loves to remind the media, he doesn't know who his team is until October.

Even if metrics aren't how you go about breaking down a team, the first month of the season is still somewhat of a "preseason" for everybody, especially this season coming off Covid, the shortened actual preseason, and so many teams not playing their starters in it.

If you're having a rough start as well (4-7) just use this as an excuse and get things back on track this week.

Let's get some winners.

Want to be shocked?

Nobody in the NFL is moving the chains more consistently than the Cowboys through the first 3 weeks of the year.

But there's the newly improved, Sam Darnold led, Carolina offense right behind them.

Dallas is coming off their second straight win in impressive fashion over Philadelphia, and Carolina is rolling with an undefeated start behind Darnold and a stellar defense.

Look at these numbers.

The Cowboys dropped 41 points on an above-average Eagles defense going into this past Monday, this will definitely be the test to prove to everyone how dominant the Panthers defense is. If Carolina holds Dallas under 25 points this might be the best defense in football.

You've also gotta factor in that Dallas had 5 days to recover. Carolina had 9 for this one.

Sharp money came in early on Carolina and brought the line down, so if you were able to still get it at 4.5 (Barstool Sportsbook still has it) that's good value.

The Cowboy's defense is also much-improved, but still susceptible to the big play. They allow about 12 yards per completion and have given up 16 plays of 20 yards or more. Up to Darnold/Moore/Anderson/Marshall/Smith to push it down the field, which I think they will.

Extremely fragile Christian McCaffrey is once again out for “a few weeks,” according to Coach Matt Rhule, so that now means receiver D.J. Moore is the Panthers’ best offensive weapon. He is for sure going to be blanketed by the Cowboys’ top cornerback, Trevon Diggs, who has had an interception in each game this season so far.

Behind new OC Kellen Moore, Dallas has been extremely aggressive on offense. Expect them to try to exploit a secondary that hastily added C.J. Henderson via trade during the week.

Despite that, I think this Carolina defense stuns the Cowboys today and brings them back down to Earth. 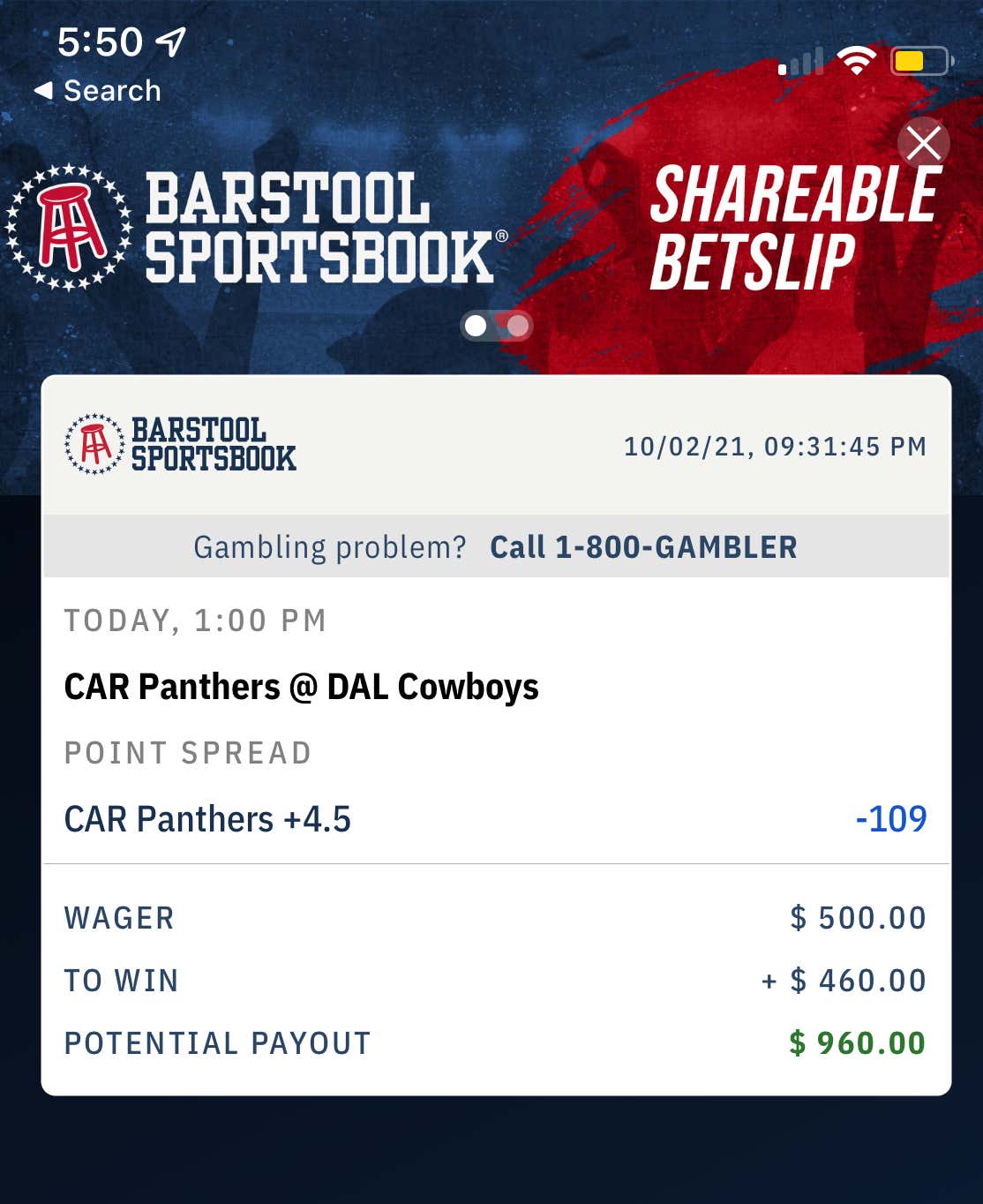 Want your mind to be blown? No? Then sit down for this one.

Kirk Cousins has yet to throw an interception this season.

But today he faces a Browns (2-1) squad that are the most complete defense the Vikings (1-2) will have seen. So expect that to change.

It's still unclear if Dalvin Cook plays today, but his replacement, Alexander Mattison, rushed for 112 yards in his absence.

Cousins has also thrown for more than 300 yards twice, including last week while Dalvin Cook was out with that ankle injury.

The Minnesota offensive line is also solid this year, which has definitely played a factor in Cousins' comfortability.

But today they face an elite pass rush in a Browns unit that ranks fifth in the league against the rush (201 yards allowed) and second in sacks (14).

Despite the point production for Cleveland, their offense has been gaudy. They rank 7th in overall total yards per game, and 2nd in rush yards. They also have the most rushing TDs in the league with 8.

The Vikings can't stop the run. They're allowing 4.8 yards per carry, which puts them in the bottom 5 in the league.

Kevin Stefanski worked for the Vikings for 14 seasons. He knows a little something about that organization.

But he needs Baker to make plays and look better than he has the first three weeks this season,

I think he finally gets in a groove and gets it going today and the Browns win a close one on the road. 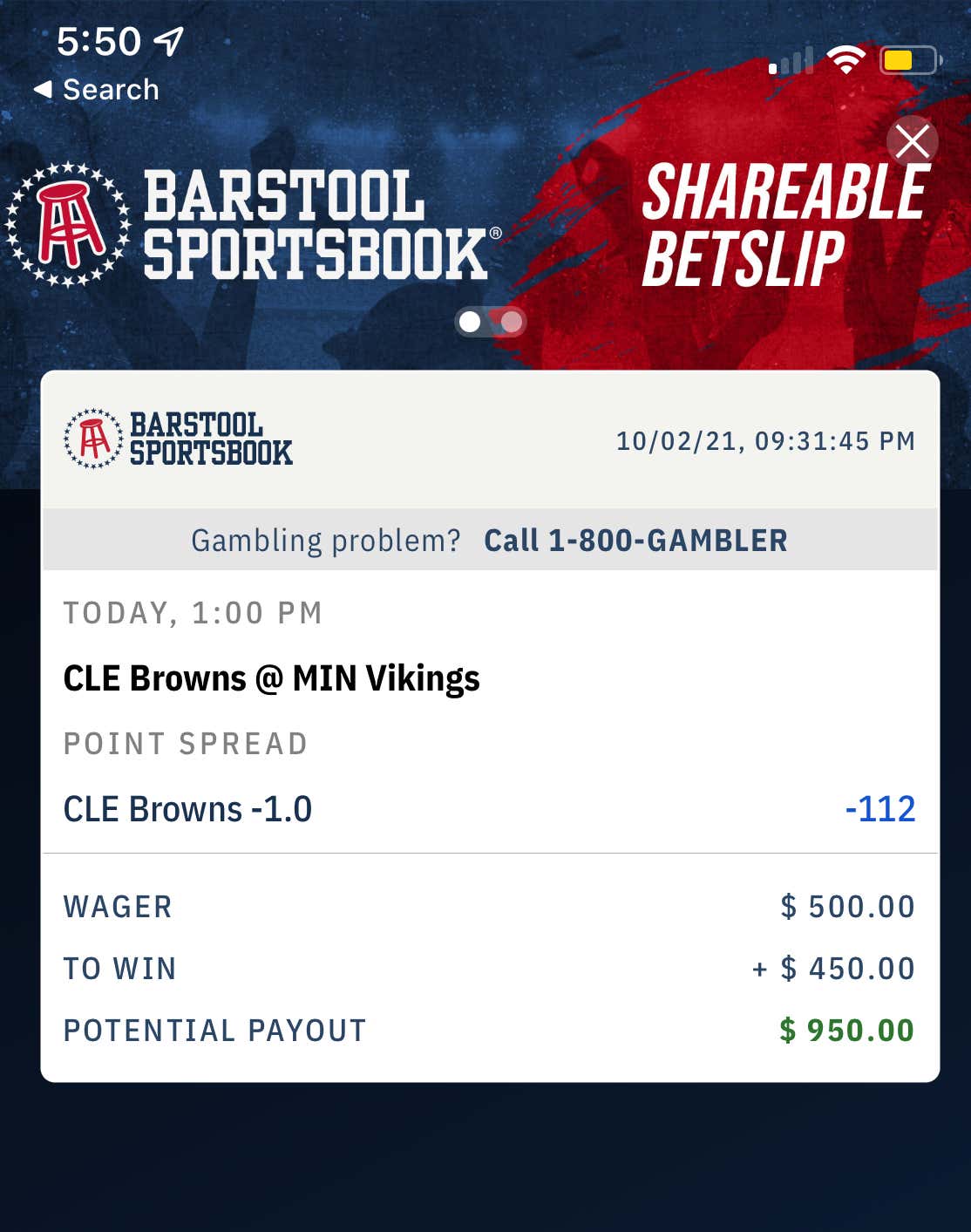 Kansas City (1-2) has had back-to-back losses only three times since 2018, making this uncommon territory for a perennial Super Bowl contender. But we now know why.

Andy Reid is a beauty. I hate his team, but he's impossible to dislike. Glad he survived that scare this week.

They are likely to bounce back against the Eagles (1-2), who took a beating from Dallas on Monday and had a short week to prepare for this one.

What's killing the Chiefs this year so far? Themselves. Ball security has been a major issue for the Chiefs offense, which committed six total turnovers in losses to the Ravens and the Chargers.

The improved Eagles tried (and failed) to win a track meet against the hated Cowboys. If they attempt that today, it's a guaranteed formula for embarrassment against the Chiefs.

There's no way Andy Reid doesn't march into Philadelphia and drag his nuts across Lincoln Financial Field and all in attendance. Right?

The Chiefs get it back on track today. 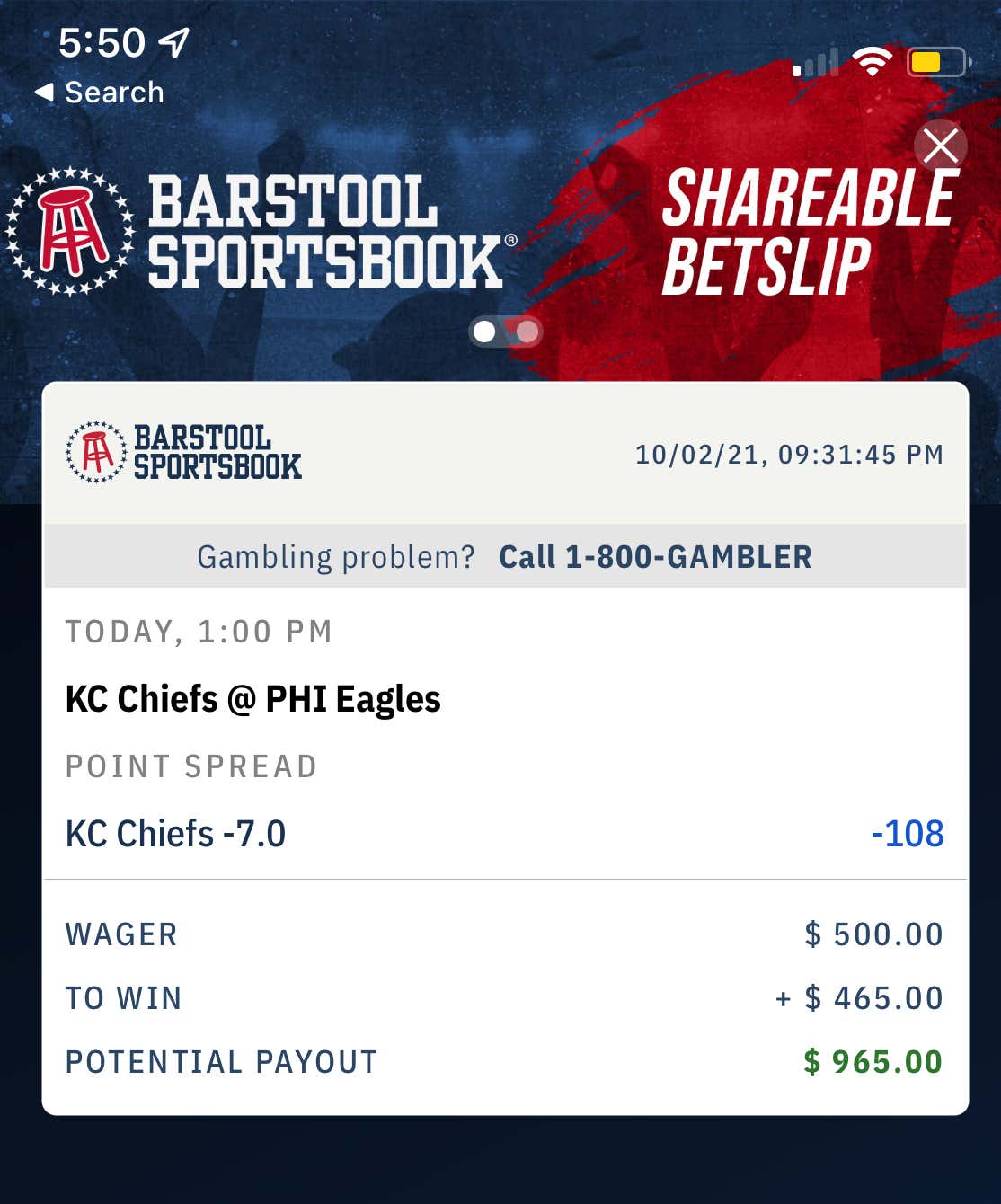 Just two years ago, these teams were battling for the NFC’s top seed.

64% of bets/69% of dollars are on the Seahawks, making Seahawks the trendy 'dog of the week. They’re one of the more popular teaser choices this weekend as well. You know what that means. Major red flag alert.

The 49ers got good news this morning as TE George Kittle, listed as questionable for Sunday due to a calf injury, will play today, per source.

Kittle should go off today against a Seattle defense that is straight up horrible.

The Seahawks (1-2) allowed opponents to amass over 450 yards of offense in each of the last two games. No amount of Russell Wilson magic can save a game with those defensive performances.

Despite injuries riddling San Fransisco (again), they are 2-1 coming off a narrow loss to the Packers on a last-second field goal.

This San Fran defense is the real deal, and the team is better than they've appeared, and Seattle's defense has major issues. I think San Fran covers this one. 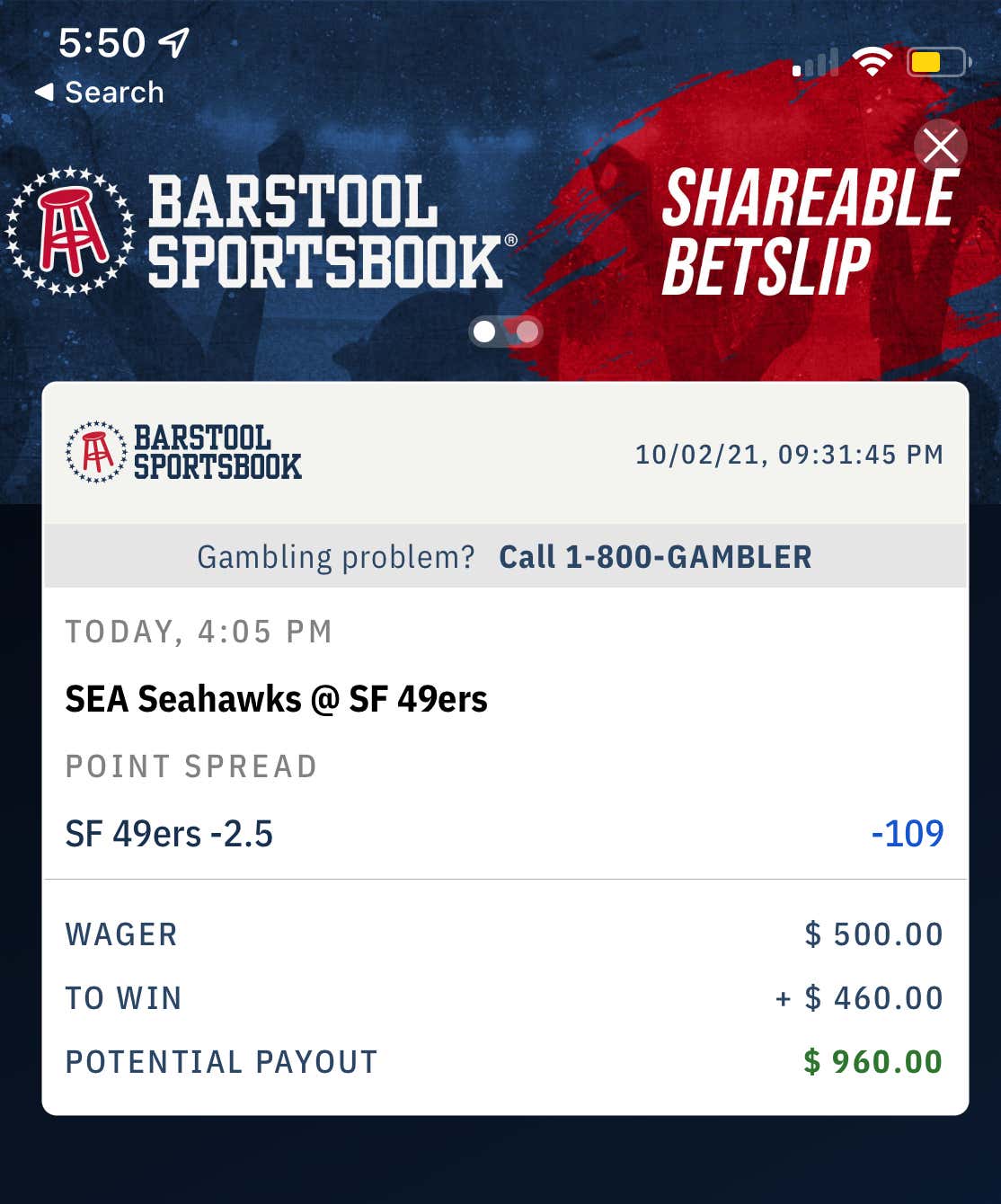 First off, big blow for Tennessee

So expect Matt Vrabel to feed Derrick Henry like a maniac. Especially against this pathetic Jets defense.

Derrick Henry is getting help from his OL: He has 205 yards before contact, most through the first 3 games in a season of his career.

Jets rookie quarterback Zach Wilson has thrown seven interceptions to two touchdowns, and the Jets (0-3) have rushed for more than 100 yards only once. Even a developing defense like Tennessee’s should be able to contain the whimpering Jets’ offense.

This formula is a simple one for the Titans-

Tennessee has not scored fewer than 14 points since Week 6 of the 2019 season.

Why does that matter?

Because 14 is all it will take for the Titans to cover against the Jets, who have scored six total points the past two games.

Expect Tennessee to storm out to a lead early, then pound Derrick Henry for the rest of the game. 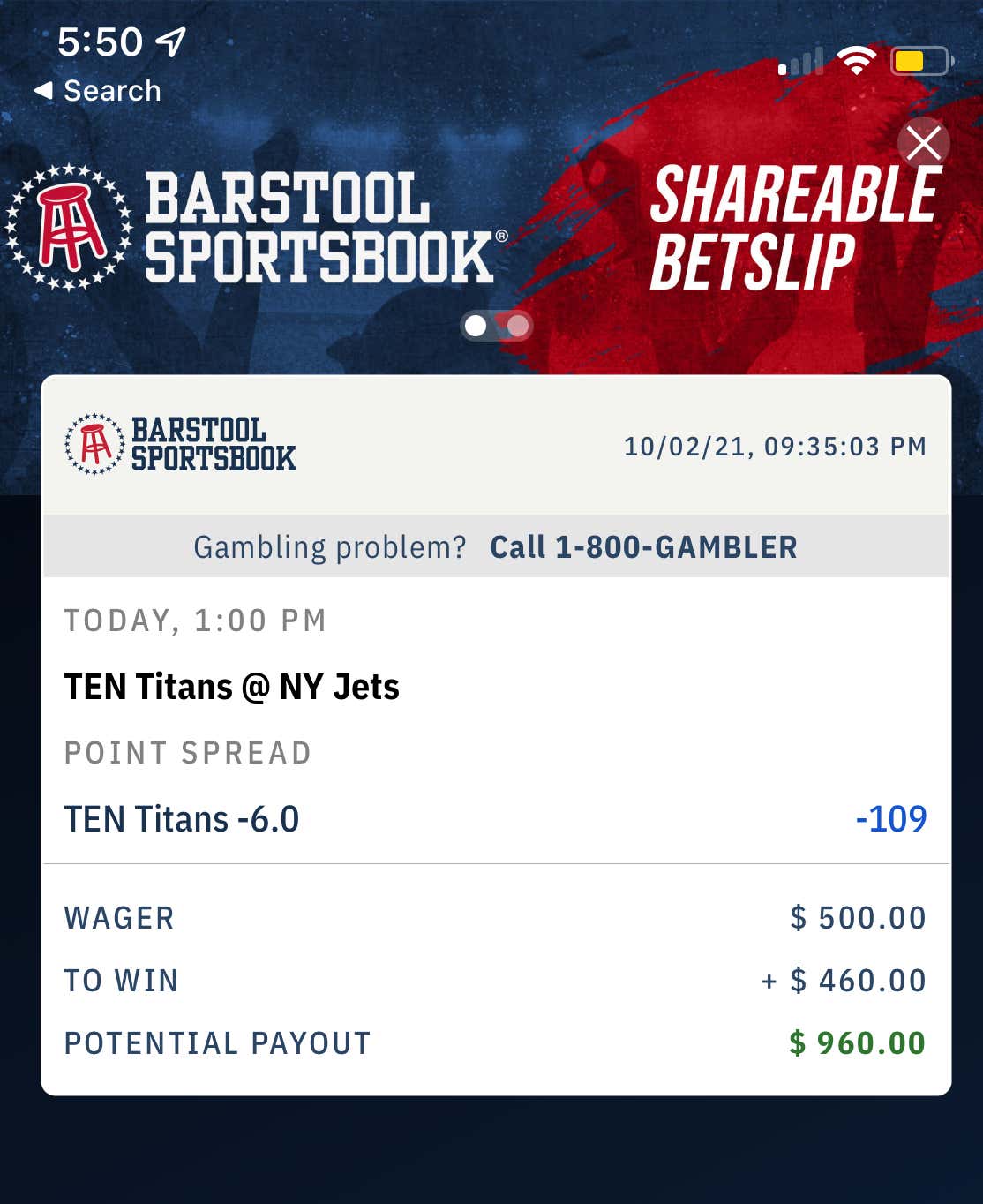