It's only fitting that we run this one tonight in honor of the greatest to ever do it's return to Foxboro.

It's the song Tom chose to take the field to for like 15 years at Gillette every home game. (No not for starting lineups. We all know that's "Crazy Train". For when the players take the field for warmups.)

"Public Service Announcement" Is the 10th track on one of the greatest albums in music history, Jay-Z's, The Black Album.

This standout track is one of Jay-Z's most popular live concert staples. It’s a wide-ranging, pun-heavy tune that ranks in the upper echelon of his extensive catalog.

Jay-Z's "Decoded" - The second verse for “Public Service Announcement” was almost entirely unrelated to the first verse. I wrote the second verse, which opens with the lyrics, I’m like Che Guevara with bling on, I’m complex, as a response to the journalist. When someone asked me at the time of the Unplugged show why it was that I wore the Che T-shirt, I think I said something glib like, “I consider myself a revolutionary because I’m a self-made millionaire in a racist society.” But it was really that it just felt right to me. I knew that people would have questions. Some people in the hip-hop world were surprised by it. There are rappers like Public Enemy and Dead Prez who’ve always been explicitly revolutionary, but I wasn’t one of them. I also wasn’t a Marxist like Che—the platinum Jesus piece made that pretty clear.

Jay-Z wrote the second verse of this track after a journalist went over the top in interpreting the symbolism in one of Hova's outfits. He recalled to MTV News: "The second verse of 'PSA' may not have that many hidden jewels in [it], but the story behind why I wrote the second verse is pretty interesting. It's sort of that look on rap, how this writer had written this article about me wearing this Che Guevara shirt with a Jesus piece, and she was like, 'The Jesus piece is hitting his head,' and I was like, 'You're going a little too far. It's a T-shirt and a chain. It's not literally hitting his forehead. That experience inspired the entire verse. 'I'm like Che Guevara with bling on, I'm complex.'"

“Public Service Announcement” by JAY-Z wasn’t an ordinary interlude; it was a fucking anthem.

For the song to stand out the way it did, and has endured, on an entire album of fired-up tracks speaks a ton. 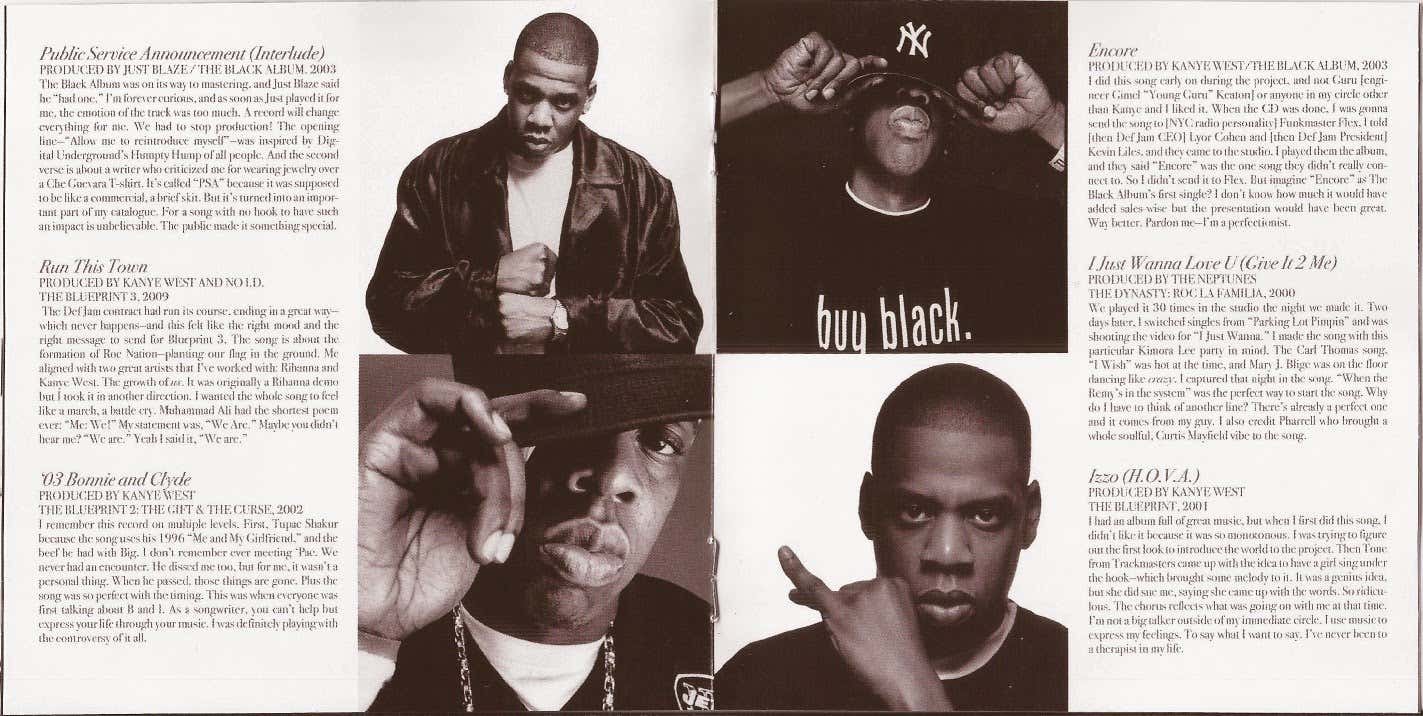 "I’m forever curious, and as soon as Just played it for me the emotion of the track was too much. A record will change everything for me. We had to stop production! It’s called ‘PSA’ because it was supposed to be like a commercial, a brief skit. But it’s turned into an important part of my discography. For a song with no hook to have such an impact is unbelievable. The public made it something special." - Jay-Z

Just Blaze claims he made this beat in 10 minutes which if true is mind-boggling. Not so much for it being a complex instrumental per se, but more so for how successful it became.

This Jazz baseline is beautiful. The funk soul elements make a perfect compliment to the kicks Just Blaze added.

A little known fact is that Black Moon sampled the song a couple years prior, on their track "Stay Real". So it's very doubtful Just Blaze's boy just randomly heard the original Little Boy Blues record out of nowhere.

The quote sample sandwiched between the first and second verse is from poet Millie Jackson.

The Black Album was billed as Jay-Z's final album. It was a near-perfect album, the musical equivalent of Jordan's game-winner over Byron Scott as he walked off into the sunset. And "Public Service Announcement" served as a standout amongst it all. It was the cap on a career where Jay-Z proved his dominance against some of the best of all time, being tested over and over again. Just like Brady. When a song is this good it doesn't need a hook.

And his closing line on the song couldn't be more fitting - “Either love me, or leave me alone”

p.s.- the Danger Mouse Beatles mash-up is unreal too