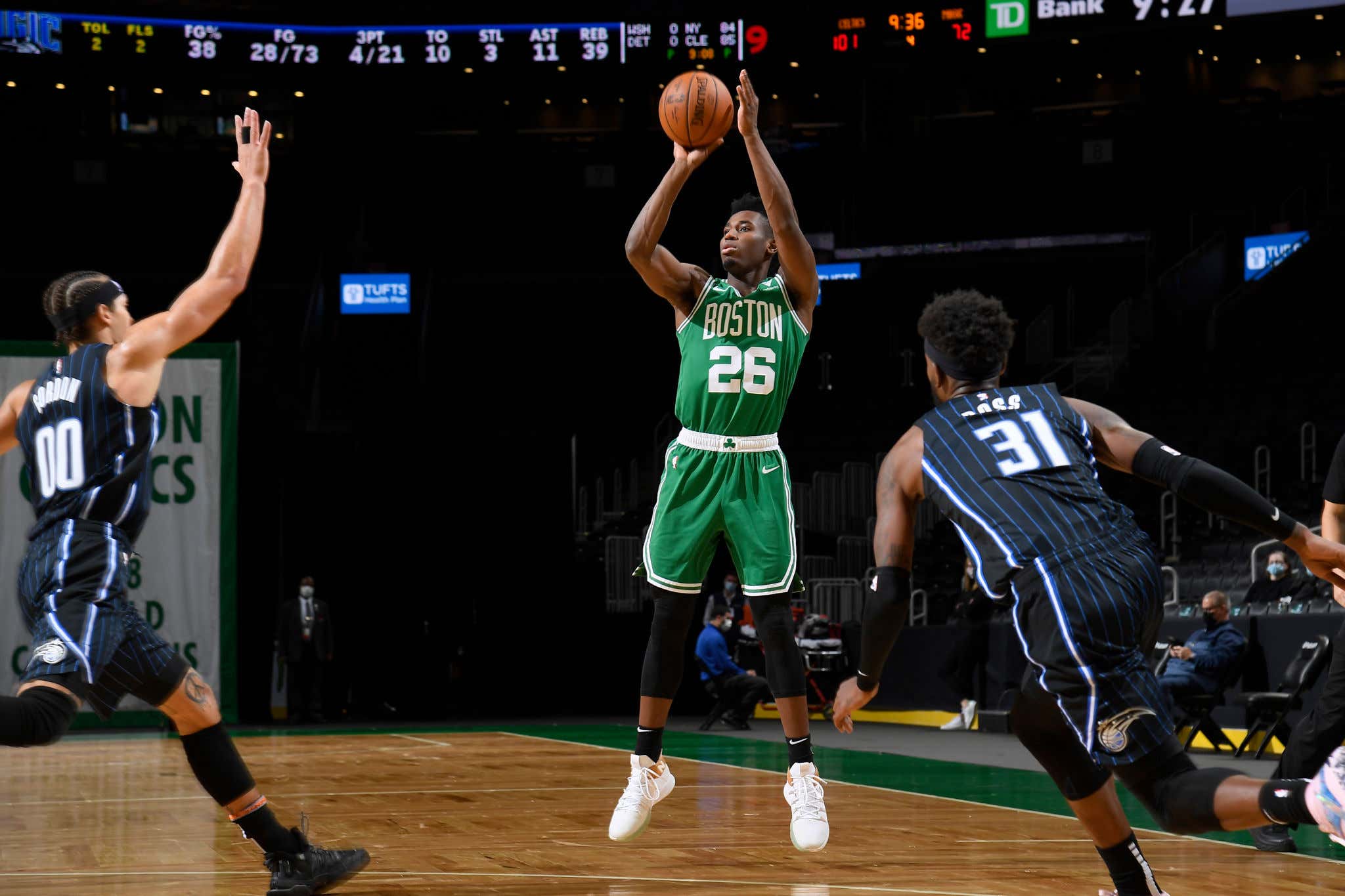 As I sit here and stare at my calendar counting down the days until the Celts are back in our lives again (we're down to 4 if anyone was wondering), my brain started to wander as it often does. This time, I started to think about Aaron Nesmith and how he's sneaky a pretty significant wild card as we head into the season. He closed last season strong, looked pretty damn good in Vegas, and now that he (and Pritchard) finally have a regular offseason/training camp I think it's OK to expect a much improved player as we enter Year 2. I honestly think this is true for the majority of Year 2 guys across the league. Now back to a normal schedule, it wouldn't shock me if a ton of Year 2 guys took a legit leap.

So then I started to think about what my ideal Year 2 looked like for Nesmith. I wanted to see what the people thought, so I threw out this tweet

and the responses started flowing in. For the most part, those that answered seriously look very similar to how I feel. With Nesmith, we aren't sure what his role might be at this point of the year. In my perfect world, he plays his way into becoming the starting wing next to the Jays. That would be the ideal situation for me because I think there's value in the spacing he can provide. It feels a little much to say, but I don't think it can be understated what a breakout year from Nesmith could mean for this roster. At the same time, it's important to set your expectations to be realistic. I'm not sitting here telling you I see Nesmith about to explode into an All Star player, but for him to make a real impact I'm not so sure he has to.

In looking at most of the responses to that tweet, I feel like we're all on the same page. Nesmith's play comes down to two areas for me.

The one thing I did notice while watching Nesmith play in Vegas was that while it was nice to see him improve as a scorer with some more off the dribble shit, the defense was still very much a work in progress. Especially at the point of attack. Guys still go right by him way too frequently, and this was Summer League talent. That's a little different from NBA regular season talent. As we know, you're not going to see the floor unless you can defend on a consistent level. I will say that towards the end of the season last year Nesmith showed some real improvement on that end, so there's at least something to build on.

So when you think about what an ideal year looks like for him, I think it's a combination of the eye test and his actual production. For example, when he's in lineups with the starters, his role obviously changes. I want to see him be the high energy guy and someone that knocks down his open threes when he gets those opportunities. The good news is that as a rookie, Nesmith shot 39.8% on catch & shoot opportunities. It'll be interested to see how that volume looks if he ends up getting more than the 14.5 mintues a night he had last year. But when he's playing with mostly second unit guys? I'd love to see him take the leap to be the #2 guy offensively in those lineups. The primary scorer will probably be Schroder, but this is where I think Nesmith taking a leap will have the biggest impact.

If you were to ask me to put numbers to his season, if he's around the same 15-20 minutes a night I think the expectations of around 7-10 points a night feels right. To put this in perspective, of every NBA player that played 20 minutes or less, only only 4 players averaged more than 9.9 points a game (Jordan Poole, Quickley, Naz Reid, Bryn Forbes). I think if we see Nesmith live around 8/4/2 on a similar 43/38% splits with decent consistent defense, that'd be fine. If he finds his way into more minutes, obviously the expectations would shift. If he finds a way to get closer to that 40% mark from three, now you're really cooking with gas.

With the shooting of so many guys still pretty much a question, having a reliable consistent outside shooter from a guy on a rookie contract is very important. Guys like Smart, Schroder, Richardson etc are probably going to live in the 32-35% range from three. We've seen what not having legit shooting does to this offense and the spacing around the Jays. This offense was at it's best when they could have 5 legit shooters on the floor. Now with Horford back in the mix, if Nesmith's shooting continues on its current trajectory, I don't think that's a stretch to have this year.

There was one comparison in the responses to that tweet that I really liked and thinks fits perfectly. Cam Johnson in PHX. Last year in 24 minutes a night off the bench, Johnson threw up 9.6/3.8/1.4 on 42/35% with 2.0 3PM a night. I think Nesmith has already shown to be more efficient, but if you watched the Suns play you know that Cam was a legit contributor off the bench for them. That's what I want Nesmith to develop into. Someone who you can spot start if needed, and someone who you can rely on to fill that shooter role in his limited minutes.

It'll be interesting to see how Ime handles the rotations now that there is some competition at the wing spot, but I do think that Nesmith has the skillset to really make an impact if he continues on his development path we saw start last season. Now with more experience under his belt, that doesn't feel too unrealistic.