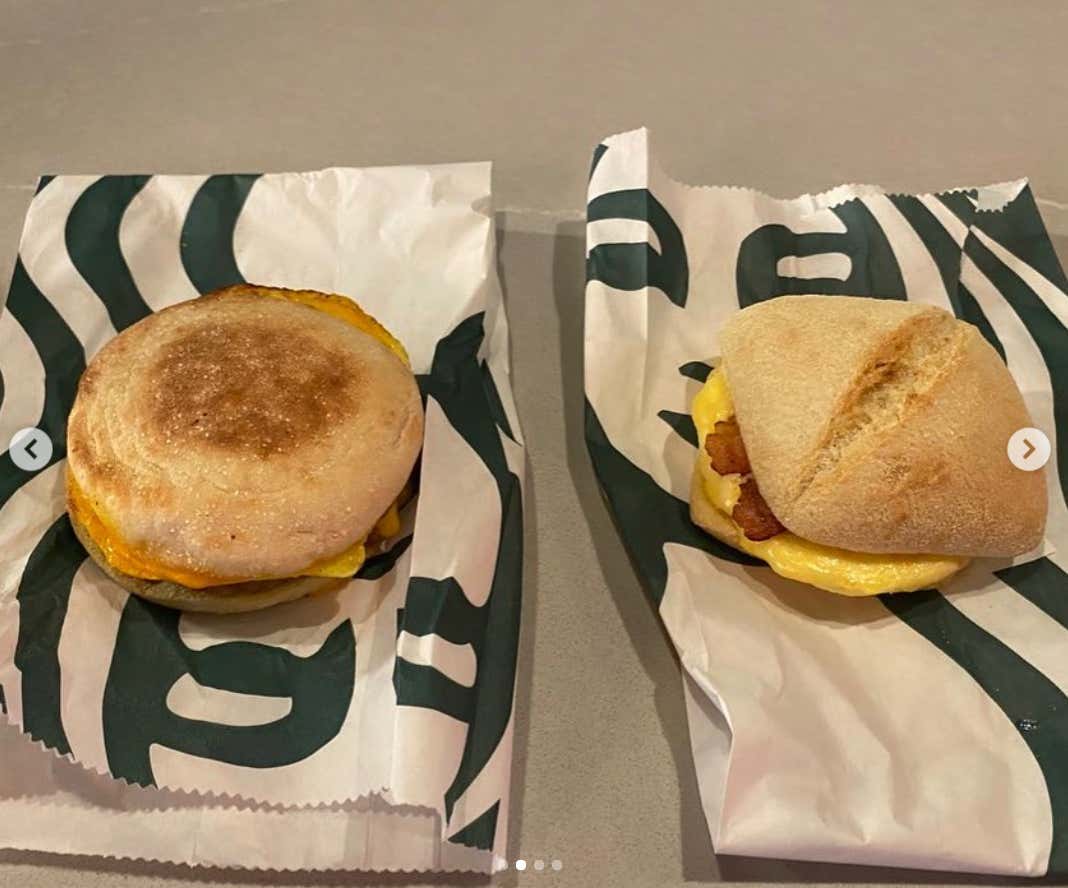 Stop being such a snob.

I know the food isn't good. I didn't go there for the food. I'm there for the venti cold brew pumpkin cream coffees and maybe a Nitro if the machine's working. Obviously I dabble hot coffee as we make the transition into its regular season. Nobody is suggesting I am primarily interested in Starbucks breakfast sandwiches. But since I'm here, and since I'm hungry, I might as well get a little sammy to start the day. That's been a consistent attitude of mine since entering the corporate workforce nearly 10 years ago. I'm practically my generation's poster boy for the tireless advice that you save $2500 annually if you just kick that silly coffee habit that keeps you from throwing yourself in front of a bus every morning.

Anyways. The sandwiches. I eat them all the time. And as I said, I recently awoke to a nondenominational epiphany that's worth sharing and it unfortunately has to do with the vaunted Bacon Gouda. 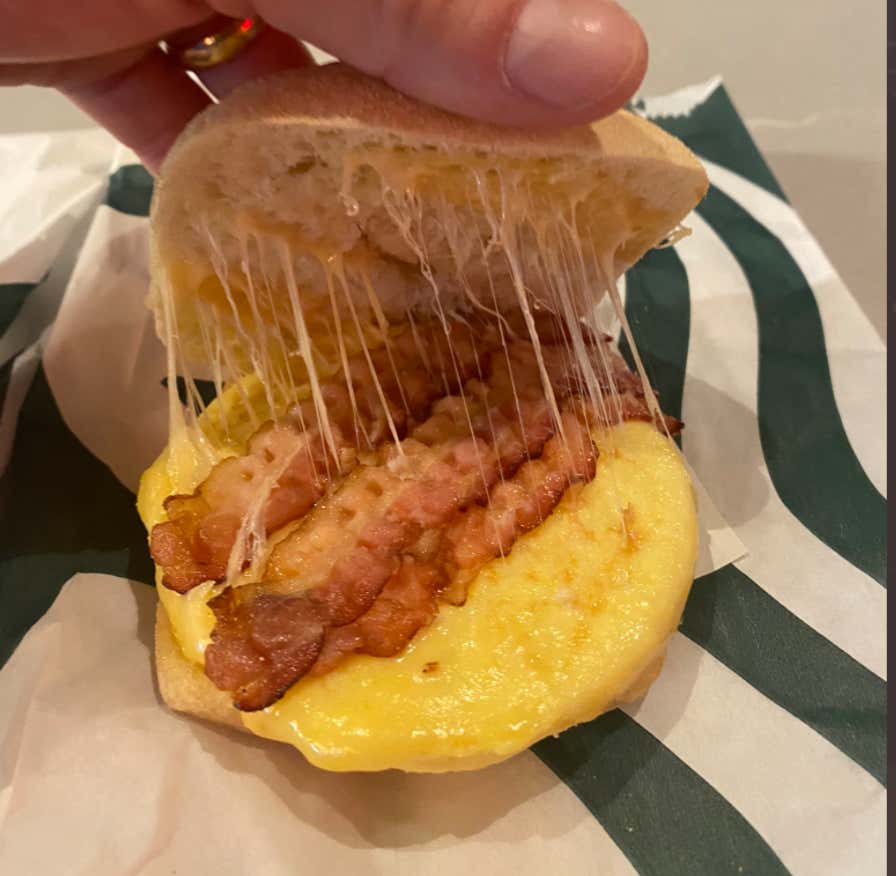 People routinely categorize the BG as the premier Starbucks breakfast sandwich and I've basically always agreed with them. The ciabatta is fluffy yet crisp. The egg patty blends nicely with the cheese. And traditionally speaking the bacon was flavorful and generously distributed. Again, there's better places to get a breakfast sandwich, but in the land of the blind, the man with one eye and a bacon gouda is king.

Then something happened recently in my life. I ordered online pickup for my neighborhood Starbucks and they were out of BGs. Reeling in defeat of a night proving myself via Malort, I needed something salty and fulfilling to offset my overactive stomach acids. Normal, maybe. But certainly not healthy. And that's when the sausage started speaking to me.

You've been a bad boy Carl

And this bad boy needed breakfast. I pulled the trigger on the Sausage Egg & Cheddar then immediately went home and slathered it in JP Graziano mild muffuletta. From there I had rough sex with my SEC. It was delightful. The English muffin was perfectly toasted The sausage dripping with rich flavor. All components of cheese, meat, egg and bread perfectly ratio'd in a 1:1:1:1 formation once believed to be exclusively reserved for the Egg McMuffin. Not to mention this handheld is piping hot after some light travel in the bag. One of the more underrated aspects of an otherwise high performing breakfast food: 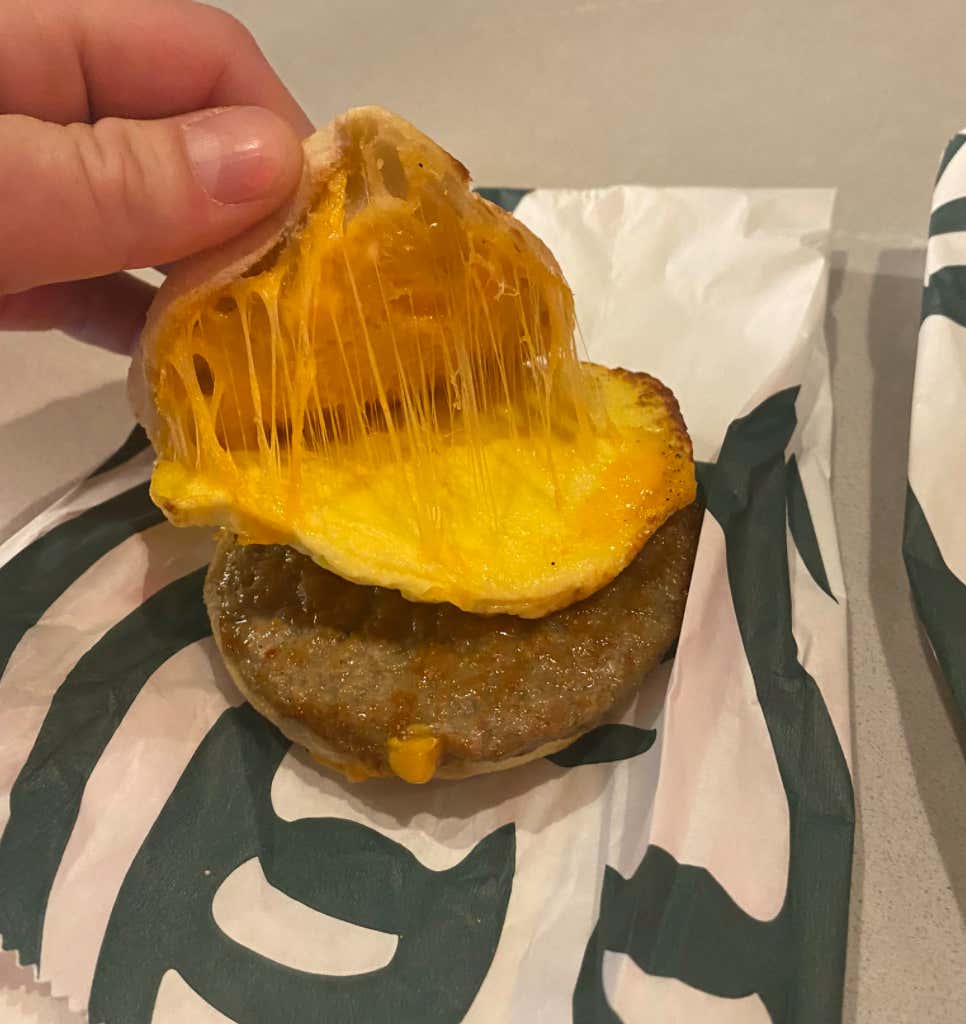 Shortly thereafter and I'm a full convert. I don't want to hear your bullshit about how bacon is a superior breakfast meat or that english muffins are for poors. That's a trash attitude from a trash person.

In the dozen or so sausage egg & cheddars since, I can say without hesitation that I made the right move. I encourage you to join on me on this journey. Put the Bacon Goudas away forever and ride with me into the future sunrises. I won't steer you wrong.