It might still be a negotiating tactic, but it's certainly more than a bluff.

According to The Athletic, the Bears have signed a purchase agreement for the Arlington International Racecourse property in Arlington Heights. The team is expected to announce the news Wednesday morning, the report said.

After submitting an official bid for the property in June, the Bears were immediately considered the overwhelming favorite to win out on the coveted suburban land. An announcement on the purchase was expected after Arlington Park officially closed its doors Saturday after nearly 94 years of horse racing operation.

Eddie wrote his take on this announcement here:

My thoughts are this. I get that the Bears should play in a stadium on the lake. I get that the most popular team in Chicago shouldn't play in Arlington Heights or anywhere else. But realistically, it's becoming more and more impossible. The fact of the matter is that Soldier Field stinks. I know it, you know it, everyone knows it. Ask our camera guy Tom who went for the first time this last weekend:

I mean it's not THAT bad. It stinks, but it does the trick and nobody is getting water boarded there. With Soldier Field being the smallest stadium in the NFL, there's really not a bad seat in the house, comparatively speaking. You're right on top of the action even if you're in the last row of the upper deck. That, and the scenery/backdrop of the lake and skyline when you're both in the stadium and tailgating around it is beautiful.

But to get in/out of the stadium is a NIGHTMARE. Beer lines are way too long, it's almost impossible to take a piss, the food sucks and you can only use pack it like….12-15 times a year maybe? I'm talking for all Bears games and concerts, too. Sorry Fire, nobody gives a fuck about the MLS.

So I get why they'd wanna move. Build a football palace on a blank canvas in an easy-to-access part of Chicagoland and rake in a gajillion dollars year round with a domed stadium. I'm talking massive concerts, Super Bowls, Final 4s, the whole 9 yards. Truthfully, as much as it will suck not having the Bears play on The Lake at first, I know that we'd grow use to having to hop on the Metra to Arlington Heights and the Bears would be better off for it in the long run.

It is what it is.

That doesn't mean there can't still be a team on the Lake. Just can't be the Bears for the reasons I laid out above. It can be the White Sox though! The White Sox current lease expires in 2029. They have what is probably the sweetest stadium deal in all of professional sports right now, but the stadium is already one of the oldest in all of baseball even though it's only about 30 years old. The only older stadiums are Fenway, Wrigley, Anaheim, KC, Oakland, Dodger Stadium and Toronto. I'm not counting The Trop because it wasn't even meant for baseball pretty sure and should be demolished yesterday. That place totally blows

Anyways, by 2029, I am assuming the White Sox will be under new ownership, as Jerry Reinsdorf will be 86 years old this January. Whoever that new owner is, I would assume they'd want a brand new stadium that will rake in cash on cash for their group. Insert this plot of land on and near Meigs Field and Northerly Island, where the Bears currently play:

Here's a zoomed out view of what it looks like for those who don't know Chicago too well: 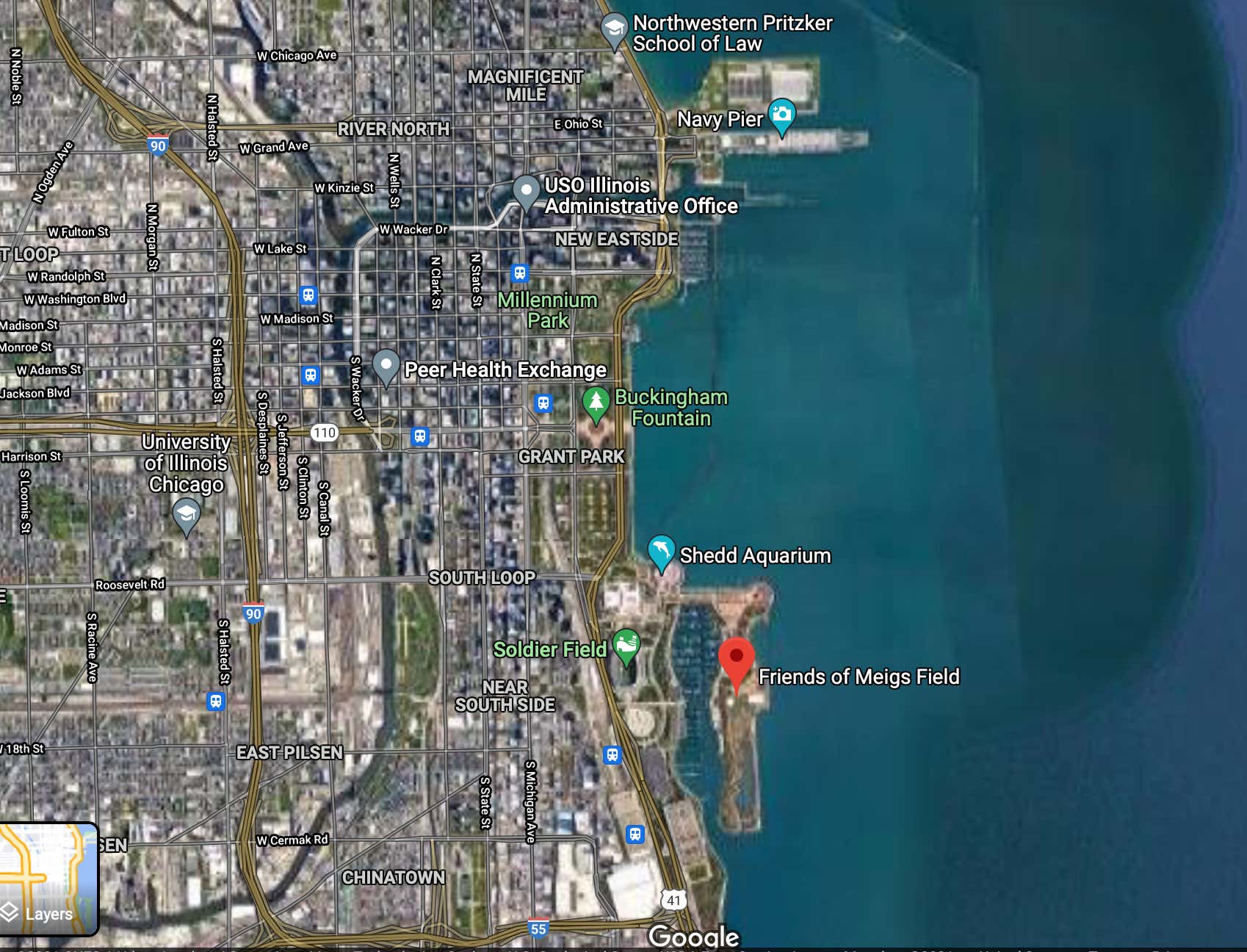 And here's a zoomed in look at it: 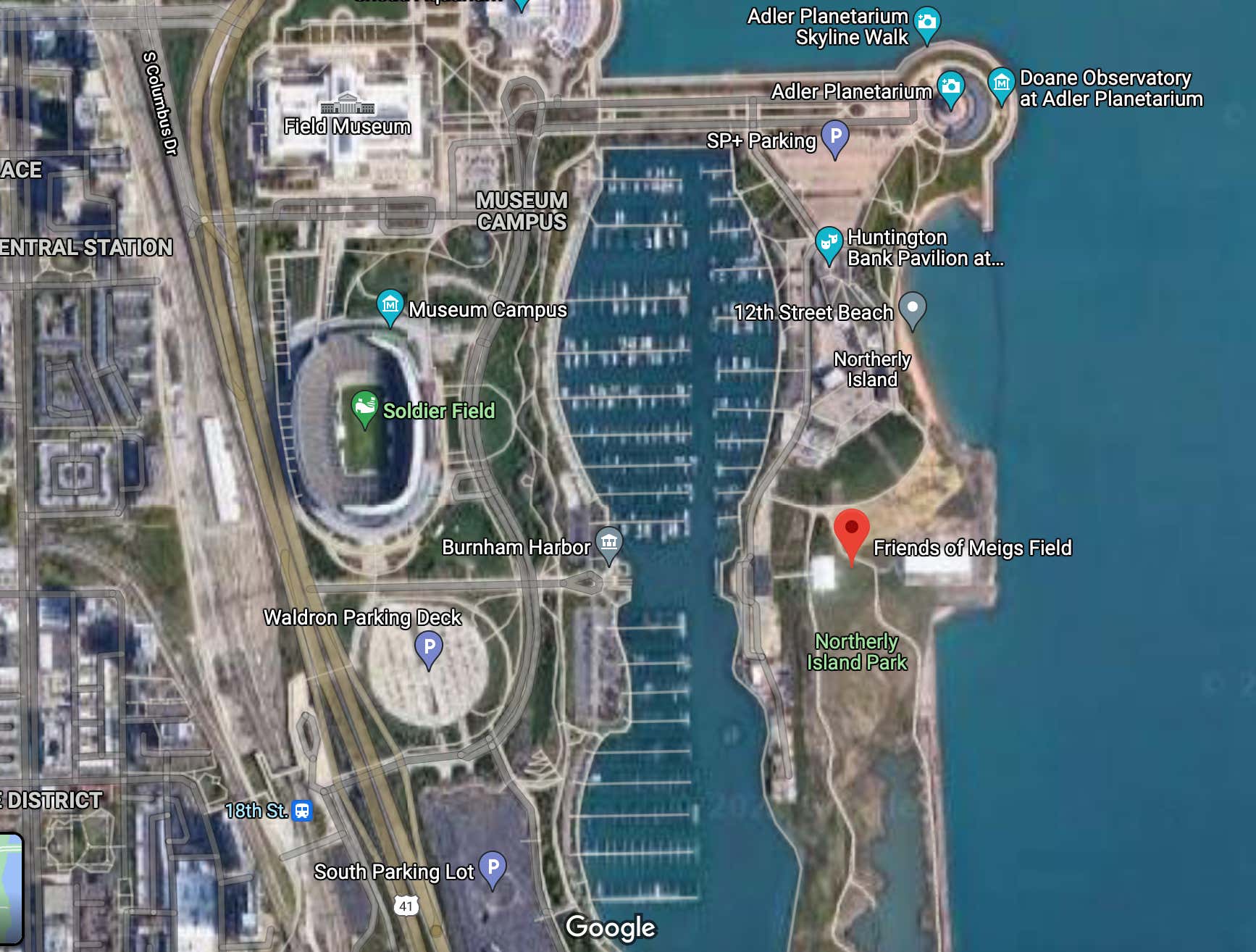 I don't know about you guys, but I think it'd be pretty sick to have a brand new White Sox stadium right where the Waldron Deck is currently located. Tear that down, tear down the ugly ass spaceship they call Soldier Field (while leaving the original Columns if need be because of their landmark status) and build a stadium that has the best skyline in the country looking down on you. They might even be able to swing it so home runs land in the Lake here in there a la San Francisco.

Obviously this is far from official and not completely to scale, but here's Sox Park on Soldier Field's current location:

It would obviously be a new stadium and not an exact replica of their current park, but the point remains. It's doable.

That said, there would be conditions. They'd HAVE to figure out a better way to get in/out of that exact area. It's borderline impossible to get an Uber in/out of there and the closest train line is a 20+ minute walk away to 18th Street. Nevertheless, if they did it right, I feel like that land mass would be a perfect home for the White Sox for the next 100 years. New stadium, incredible vibes, booming area and it's still in the South Loop so the White Sox don't really lose that South Side touch and culture they have.

I know this has about a 1% chance, if that, of happening. I'm more or less just writing about what a LOT of White Sox fans are dreaming of right now. We love Sox Park but the pipe dream of having one of the coolest stadiums in all of baseball is definitely in the back of our heads. I don't know what the future holds for Sox Park but I do know that if they took their time and did this correctly, they could have one of the coolest stadiums in baseball for a long time. That sells. It sells to free agents, it sells to sponsors, it sells to casual fans who might want to check out a baseball game but don't feel like going to Bridgeport for it.

Really interested to see if anything comes of this in the coming years. Even though I said it has a 1% chance of happening, a lot of that is because it makes too much sense in my dumb brain. That, and timetables line up pretty perfectly. Bears have about 10 years to get this stadium in Arlington Heights built, Sox have 8 years before their lease is up. That, and both owners will more than likely be looking to sell. That's the other reason I'm writing about this. In theory, it actually makes sense.