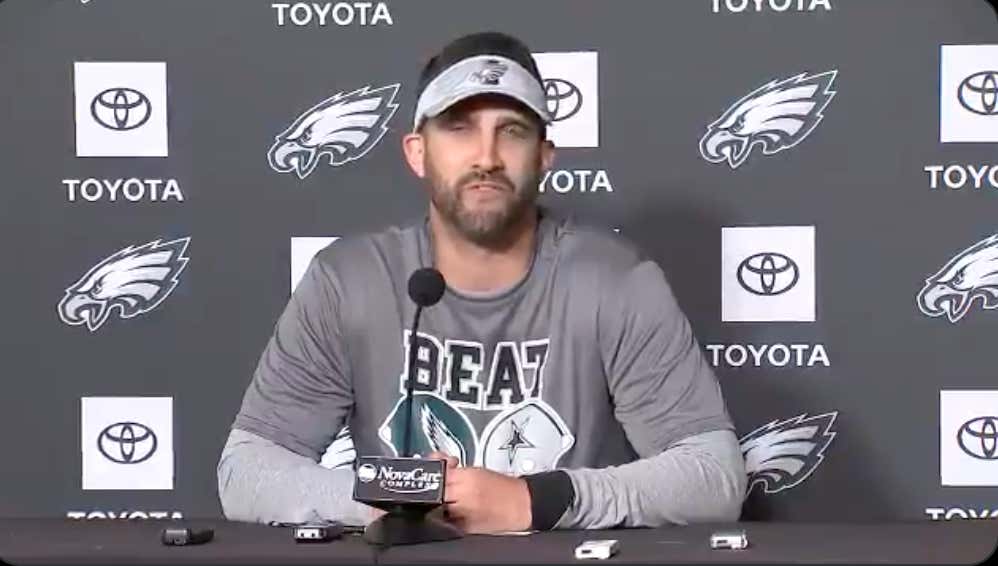 So Nick Sirianni goes out there and he'll coach in shirts of his players to endear himself to his team. Try to make that connection with the fellas as a new school player's coach.

He'll go across the street to Citizens Bank Park and buy the entire team store collection to coach when the Phillies are on a little hot streak to endear himself to the fans. Show us that he cares about the city and wants everybody to have success.

And then during Dallas week, he'll go grab himself the most generic looking "Beat Dallas" shirt I've ever seen because again, he wants to show this city that he's one of us now.

And for the most part, I don't mind it. For the most part it just seems like Nick Sirianni is a goober who at least means well and cares. It's got major "I'm not a regular head coach, I'm a cool head coach" vibes to it.

One problem though, Nick.

Do you want to know what a cool head coach would do? Want to know a better, much less fashionable way to endear yourself to your team and this fanbase?

One of the biggest flaws with Doug Pederson is that he'd completely forget about running the ball as soon as the game would start to get away from him a little bit. Nick Sirianni seems to be trying to troubleshoot that issue by just forgetting to run the ball from start to finish.

I know the O-line was banged up. I know Micah Parsons is a threat. But only giving the most consistent weapon on this offense 2 carries is bewilderingly idiotic. Especially given how much Jalen Hurts was struggling early in that game. It just seemed like Nick Sirianni didn't have a plan heading into Monday night. And you know what? I think I know exactly why.

We've all been there before. You're scrolling through Instagram and all of a sudden the algorithm throws some promoted ads your way. You didn't even know you wanted to buy this shit but the algorithm knew for you. I think what's going on here is that Nick Sirianni's Instagram feed is nothing but Eagles shirts that he can't help himself but buy. So he spends all damn day in his office just scrolling and scrolling through Instagram. Promoted ad after promoted ad. All of a sudden, it's 5pm and he had 50 new tshirts but he completely forgot to come up with a plan for week 3. It happens to the best of us, and I think it's the only reasonable explanation for what's happening here.

Which is why henceforth Nick Sirianni should only be allowed to coach in a plain white tee. If we're going to at least salvage a watchable Eagles season, that's our only hope. Or at the very least, it'll save us from more of this.