Some of you guys probably think I'm being dramatic so let's just shut up and go to the box scores. 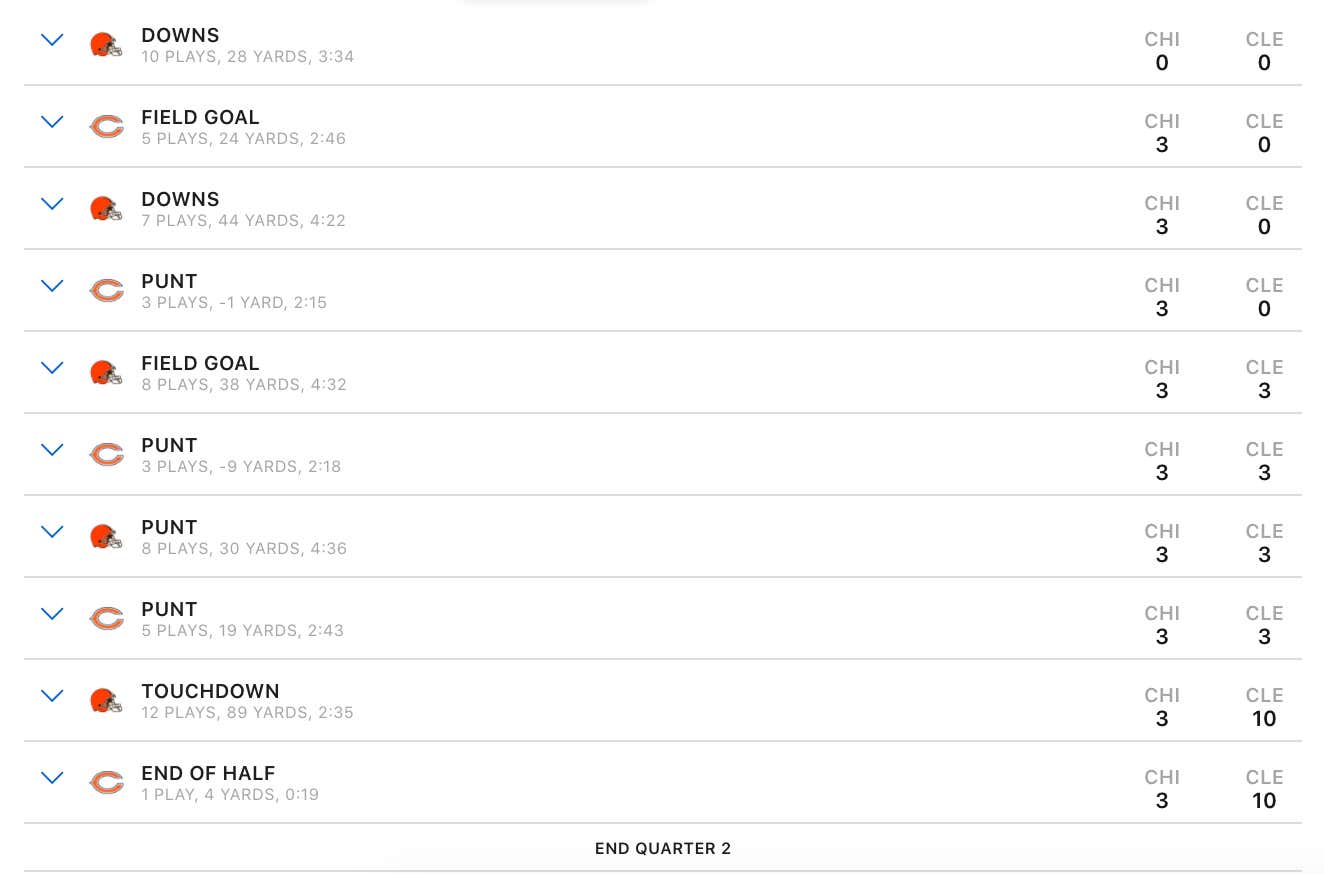 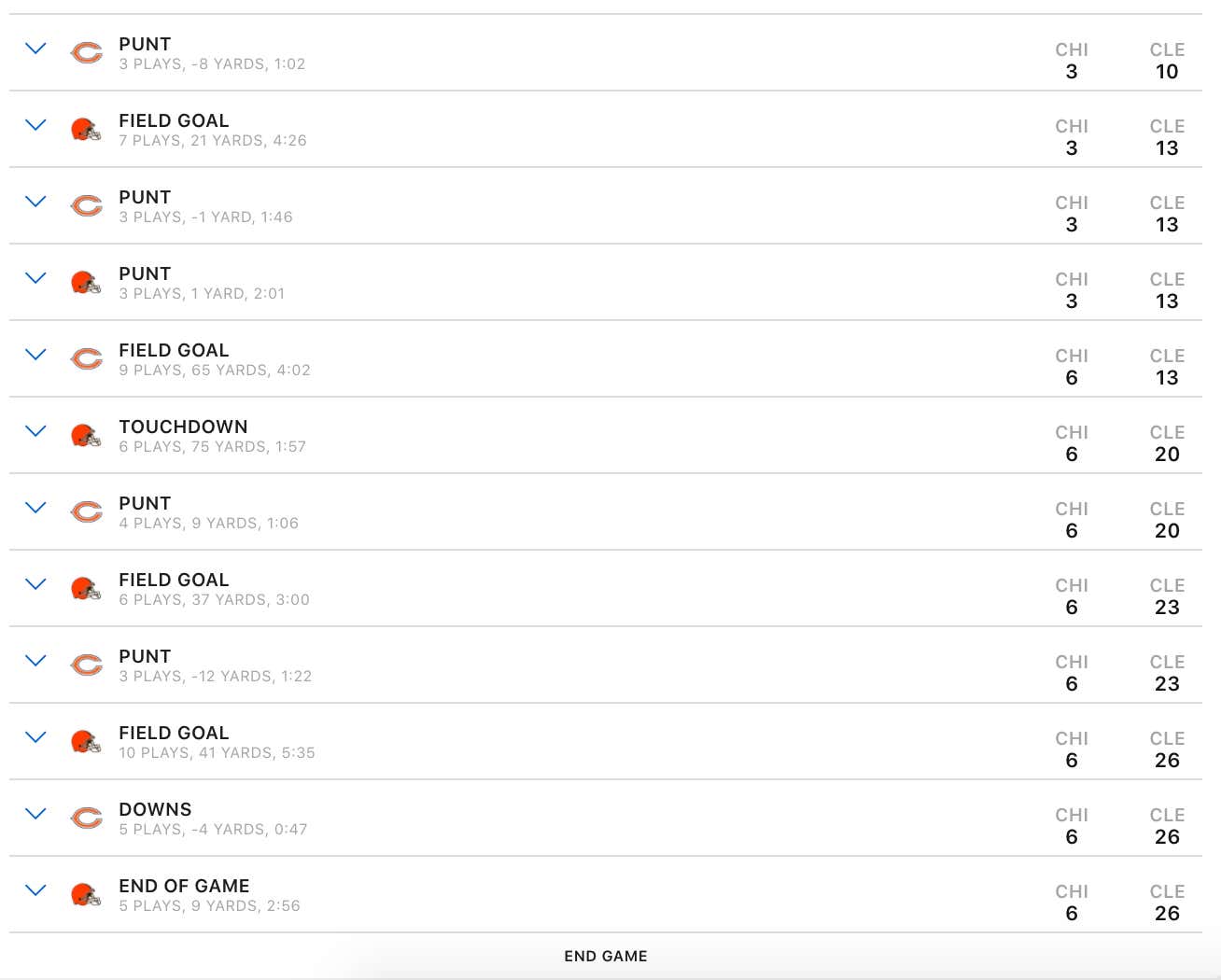 7 punts. 2 turnovers on downs. 2 field goals and that's before I refresh you guys on Saturday afternoon:

The punt bowl was fucking legit: 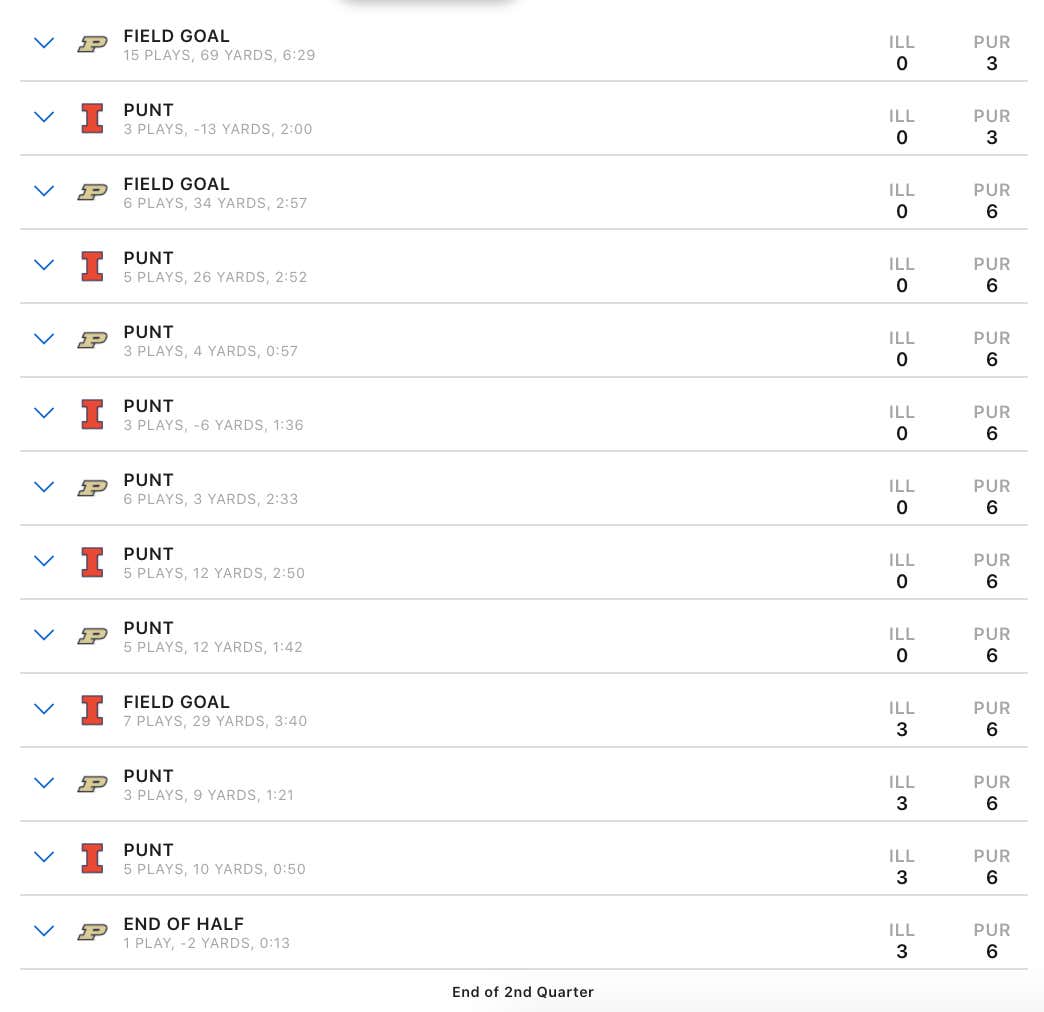 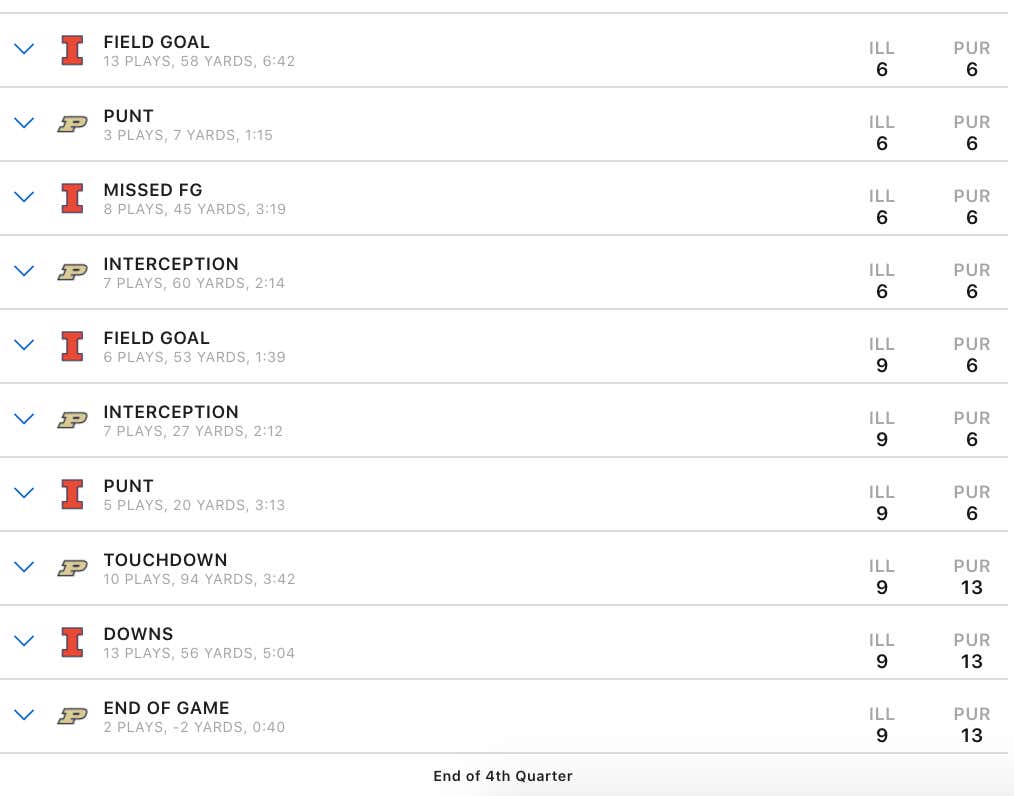 13 total punts with 3 turnovers on downs. 5 field goals on 6 attempts. No fumbles or horrendous turnovers. Just twenty two (22) drives and zero touchdowns from my football teams over the weekend. At no point in the history of football has that turned out to be a successful strategy and yet with all the data, insight and forecasting in this game, my teams still can't figure it out.

The Bears are so utterly predictable and finally people have woken up on Nagy being a fraud. Those guys are the worst. I thought he actually had a creative brain under the visor but there's honestly nothing he does well except piss me off. In that regard he's a certified expert. But in all things related to successfully leading a football team, he sucks. "Needs Improvement" would be a significant upgrade and that's the nicest thing I think I can say about the guy.

Then there's Illinois football. You know the Purdue game is going to flirt with single digit scorigami, but I don't think we anticipated 22 total punts. Not with decent weather and the Illini gaining steam each week. But alas I was wrong and it's the same Big Ten story. 1-4 overall with shoddy quarterback play and a bunch of late losses. The only difference under Lovie this early was that the game was generally over in the first half. Now a days we sweat it out until the last two minutes, then lose.

I've watched some bad teams in my life but never this kind of combination at the college and professional levels. The night is darkest just before dawn but I'm starting to feel like we're living in Antarctica and there's no sunlight. Just sub zero winds and a bleak landscape of hopeless desperation. That's the world I'm living in and making matters worse I got a bee sting on Saturday in my hand. Looks like a legit twist off hand right now.

I don't know if I'm allergic but this isn't natural. I was told to remove the stinger but couldn't find it, so I end up fucking with it even worse. I tried cortisone but the moisture made it worse so now I've transitioned to gold bond. It's relieving but I'm afraid medically unconventional. My buddy said I should only panic if the swelling hits my wrist and I think it's up to my elbow now. In retaliation, I doubled up on the Benadryl this morning and needless to say today has been an absolute fuckin wash. I've been moping and dragging and generally feeling like a warm bag of milk that spoiled 3 weeks ago. All because of a bee infestation at the Soldiers tailgate scene this weekend.

Honestly it's amazing we don't have a more standard remedy for combatting bees. Of all the innovation, you'd think we'd move on from Play it cool. Like how come we don't have a mist that makes bees explode on contact. Why don't we toughen up and do something about the chaos?

Simple answer. Bees are vital to the environment. Just ask anyone with an opinion on the matter and they'll suck bee dick so fast your head will spin. Bees are crucial. Bees pollinate our parks. There'd be worldwide starvation without bees. On and on these people go with no respect or appreciation for how immobile my left hand is right now. Those people are the worst.

No it's not. Honey is an underrated McNugget dipping sauce. I want that on record.

I also want it on record that Nagy should've been fired 24 hours ago. Guy probably loves bees.