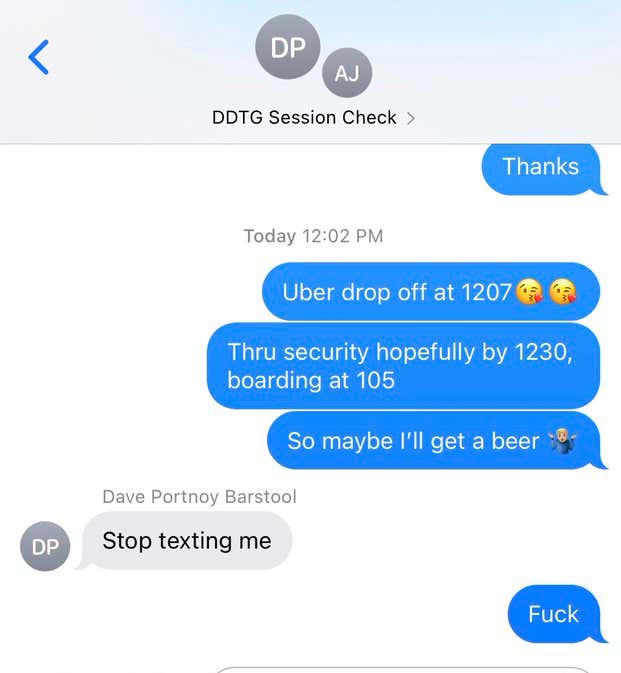 I love my guy Tech Guy Andrew, who has been grinding in the control room here at Barstool since we had barely two functioning studios at HQ2 and has reported to All Biz Pete AKA The Joseph Stalin of production. Yet despite all the long hours and hard work, it may be three simple text messages that has him call it a career here at the Stool because there is simply no coming back from that.

No matter how many DDTG streams, Rundown shoots, or fucking bowl games Andrew churns out. He is always going to be the kissy face guy in Portnoy's eyes because that's just how things work around here. If you slack off in front of Dave once, he is going to think you are lazy forever. If you hypothetically leave your young daughter at home to fly halfway around the world to make a tongue-in-cheek video about your favorite basketball player, Dave is going to correctly think you are a hard worker that would drop everything for his company. And the only way you get out of the doghouse or penthouse in his mind is by some sort of epic moment or run like one of the most incredible gambling winning streaks turning Tommy from Alarmingly Stupid to Tommy Smokes.

Not that Andrew is without blame. Throwing around kissy faces while the sun is still out on a weekday is the move of a wild man unless you are day drinking or in the same room as your girl and trying to strike up some romance digitally. Even then, you gotta triple check who that text is being sent to. Regardless, I think getting that airport beer went from a Maybe to a Definitely even though getting a response of any type from Dave should be considered a W.

P.S. I just reread these texts through the mental lens of Portnoy thinking that Andrew was seriously texting him like that since they are heading to Chicago for the Barstool College Football Show and I am HOWLING at the thought of Dave thinking he was getting kissy faced through text by Tech Guy Andrew, who is now officially Kissy Face Andrew in my eyes for the rest of his life, followed by maybe grabbing a beer if the security people are brisk. God I love this stupid company.

Can't wait to the content we get from the actual show itself. 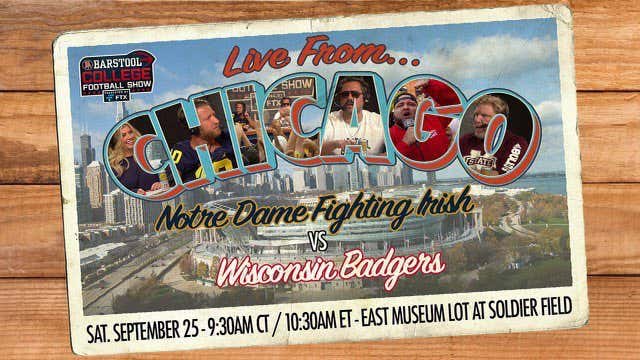 Speaking of college football, the wonderful people of Illinois and Tennessee have a heck of a deal waiting for them at the Barstool Sportsbook sweeter than any kissy face Andrew may send.