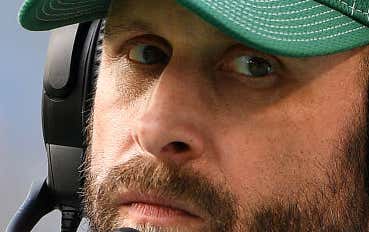 (Call him Adam Gaze because his look strikes fear into your heart.)

All I have been hearing about lately is how great Sam Darnold is doing since leaving the Jets. "Darnold's been doing amazing with the Panthers", "He beat the Jets in week one". It's been a lot to hear as a Jet fan. But as this Twitter thread from Kevin Clark shows, Gase may have been the variable rather than the Jets. (which means there is hope for Zach Wilson)

Look I am not saying The Jets are going to win the Super Bowl just because Gase left, and I hate beating up on the guy because I believe everyone should be given the benefit of the doubt, but Gase really hasn't left anywhere with a positive impact. They claim he keeps getting hired because he’s been so great with quarterbacks but Matt Rhule who got passed over for the Jets job has done a complete 180 on Darnold. The tough part about Gase’s track record is that the severity of it hits pretty close to home.

I mean that really sucks for addition by subtraction to be true for you so many times. I mean Gase can’t really be that bad, to be honest I feel bad for him. I also feel like he’s not the type of guy to see the big picture on the whole thing, like he would just react with vitriol to any and all criticism.--But hey there is something that does break the pattern.

I would love to figure out the specifics as to why Gase hasn't been working out. I mean maybe there's just something glaring and an easy fix that could bring him great success down the road. I mean maybe its just he was overhyped after being Peyton Manning's quarterback coach which is like being a fish's swim coach. I think that's what it boils down to, he got a free ride off of Peyton and then he was put way over his head into everything. He's currently and OC at his hometown Highschool, I hope he wins a state championship.