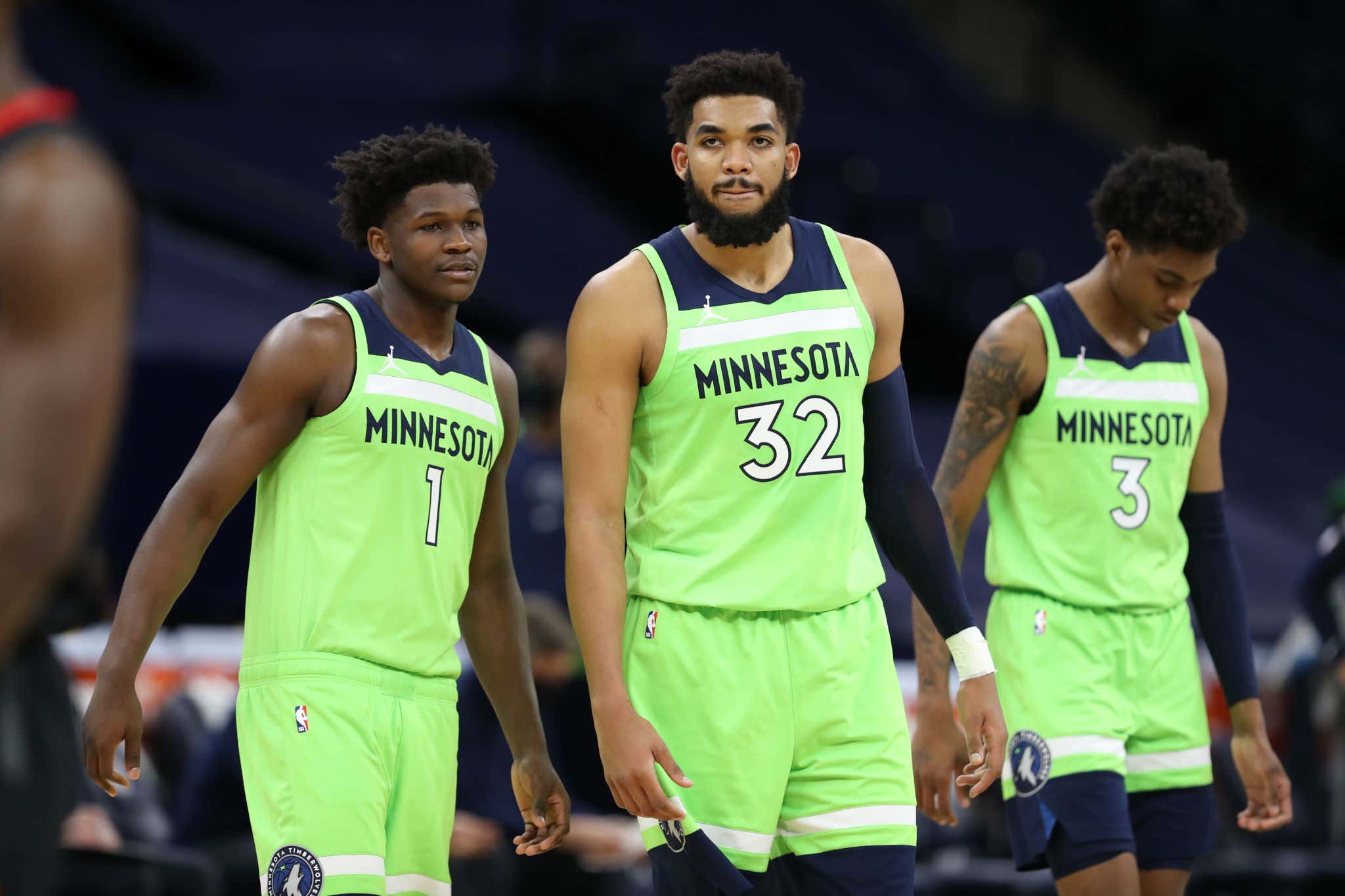 Obviously with yesterday's news it's safe to say things are a bit dysfunctional right now within the Wolves front office. Any time you fire your GM a week before the season starts, that's not what I would call ideal. But unless this causes some sort of domino effect that forces someone like KAT to demand a trade, I'm not sure how much of it will impact what we see on the floor.

I'll say this, shoutout to the tortured fanbases showing out in these polls. First it was the Kings making it out victorious the other day, and now we have the Wolves. If the Kings are the league's current most tortured franchise, the Wolves certainly aren't far behind. While it hasn't been 15 years since their last playoff appearance, they do only have 1 playoff appearance in 17 years so things haven't exactly been great. It's a shame too because I really like the people of the Twin Cities. I have a bunch of college friends from Apple Valley and I just want them and Wolves fans everywhere to be happy. It's not their fault they picked Ricky Rubio and Jonny Flynn over Steph. Look, OJ Mayo was really good at USC OK? Who knew Russell Westbrook would have been better (taken next). What, you expected them to know that Shabazz Muhammed (14th) was going to flame out and that Giannis (15th) was the better choice? Let's not get crazy. The point is. shit has been rough in Minnesota for some time now. They always seem to be "rebuilding" but what exactly are they building? Nothing ever seemed to change.

Now maybe this is me taking the bait, but things feel different this time. There are actual reasons to be somewhat excited about the season as a Wolves fan. I mean that. It's all about having realistic expectations. Is this team going to compete for a title? Don't be ridiculous. Are they even a lock for the playoffs? What are you high or something? But can they be competitive with a shot at the play in? Absolutely.

Before I get into why, let's first revisit how their summer went and what their roster looks like as of today 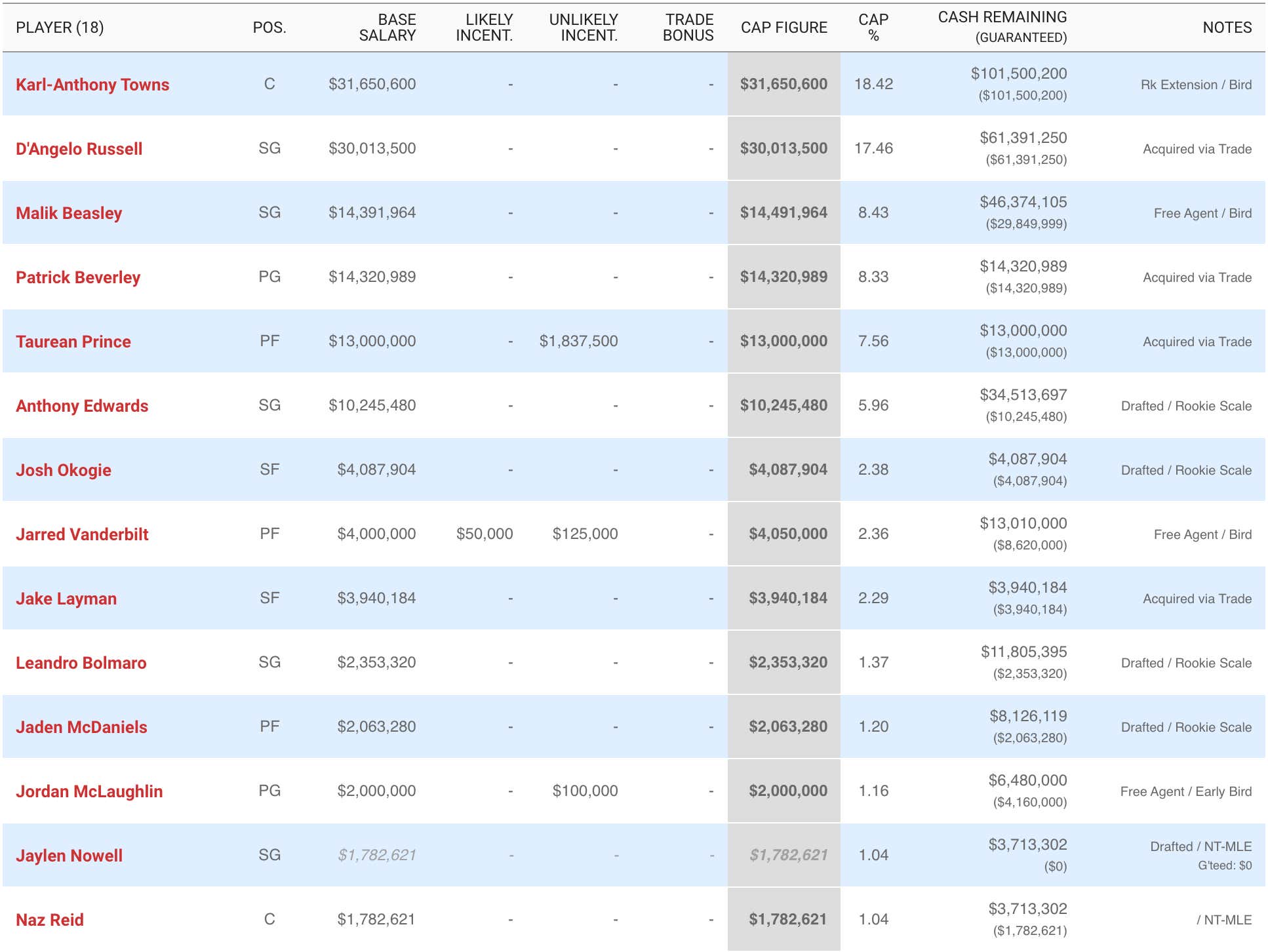 I'm going to say something and be completely serious as I do it. There is real talent on this roster. Like, actual legit NBA talent. When talking the Wolves we obviously have to mention they are very interested in a Ben Simmons trade while also not wanting to give up any of their good players, so if they are able to pull that off things will look even better. But as of today, this is their group. You look at their top 5-6 guys (DLo, Edwards, Beverley, Beasley, Prince) and that's not exactly a terrible core. In fact, it's sneaky good? In total, their cap number of $135,782,463 is good for 10th in the league. You can't pay that sort of money and still finish at the bottom of the league. Outside of the Raptors who had weird covid year and are also rebuilding, all the other 8 teams above MIN are either playoff teams or even title contenders. It's time the Wolves show real progress.

As a rebuilding team that also plays in a "small market", drafting is so important. Getting big time production on a rookie contract is the key to everything for a rebuilding team. After years and years of fucking up the draft, the Wolves actually look like they got one right with Anthony Edwards

ROY or not, Edwards has proven to be legit. Once he became a full time starter, everything changed for him over those 55 games. Very respectable averages of 21/3/3 on 43/33% splits as a 19 year old is pretty damn impressive. I think it's safe to say they hit on this pick. What's crazy is how effective he was while still having so much room to grow as a scorer. Look at his shot chart from his rookie year and how many zones he was below league average in 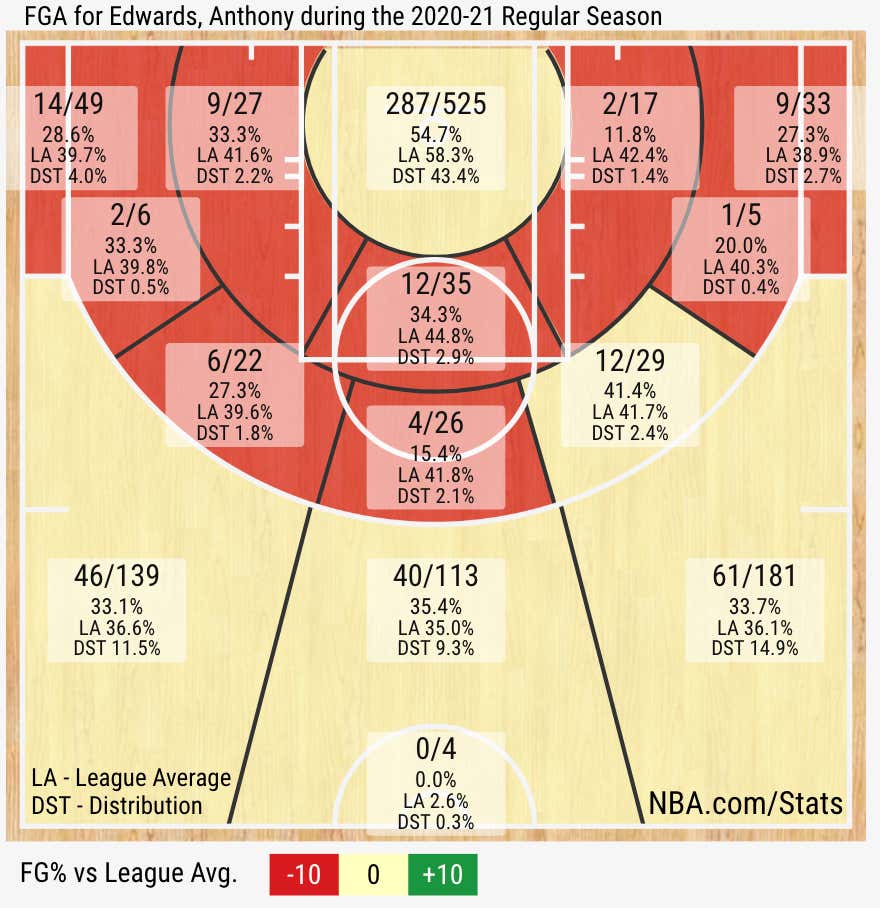 What are the chances that improves in Year 2? I'd say pretty good. It's all shit inside the arc for the most part. For Edwards, his development comes in two areas for me. The first is defensively. That's basically the story for the entire team, but he has to get better on that end. His advanced metrics aren't all that great, opponents shot 47.1% while being defended by Edwards, and with a 116 Drtg there's certainly room for improvement. The other area for me is his FTA rate. Edwards is such an aggressive scorer in a sense that he attacks the rim at an elite level. He had 753 drives on the season, yet only had a 22.5% FTAr. That can be way higher as he continues to develop. He took under 4.0 FTA a night, which is less than 2 times a game. He starts to add that to his offensive arsenal, his scoring is going to explode.

So with Edwards alone there is reason to be excited. But it gets better. Remember towards the end of last season when the Wolves decided to start winning games which ultimately lost them their first round pick this summer? They finished the year on an 8-6 run with the 8th best offense and 11th best net rating. The thing you have to remember with the Wolves is they didn't really have their main guys available. Beasley only played 37 games. DLo just 42. KAT only played 50. These are pretty important pieces to their puzzle. Once guys got back towards the end of the year, things looked a whole lot better. That's not an accident. For example, the group of DLo/KAT/Beasley/Edwards only shared the floor together in 3 games last year for a total of 13 minutes. In that extremely small sample, here's how they did

Not bad! Now I get it, this is a tiny ass sample. So let's boil things down to their three best players of DLo/KAT/Edwards since that's their main core. We have a much larger sample of these three on the floor together, and it's why Wolves fans should be hopeful. Here's how they do together

The defense is still an issue, but that's passable! It makes sense then that once DLo was back to end the year, the Wolves had a great offense, kinda shitty defense, and were way more competitive than most thought they would be. That's what makes this Wolves team so intriguing. With Beasley back, DLo healthy, and then the internal development of their young guys, there is potential we see a much improved team. At the very least someone that's competitive. For Wolves fans, that has to be a breath of fresh air.

In order for that to happen though, they need to fix their defense. They ranked 28th last year defensively. Opponents averaged 1117.7 points a night, that's 29th in the league. This is often the issue we see with a lot of the teams that seem to be stuck like the Wolves. High end individual talent, good offensively, but they can't defend for shit. You play in the West, nothing will change for you unless you commit to defense. The ones that do magically find success. Those things are related. The Wolves were 30th in the league in opponent 3P%, 28th in opponent FG%, 26th in opponent FTA, the list goes on and on. Now part of this has to do with their best player. There is no debating that KAT is an elite talent, especially offensively

But as the franchise guy it's on him to get his shit together defensively and set a tone for the rest of his teammates. KAT isn't stopping shit on that end, and eventually if this team is going to make any sort of leap, that has to change. His defensive metrics are actually going the opposite way which is a bit concerning. Perhaps with the added offensive firepower he can put more emphasis on the defensive end, but at some point he has to take ownership of his bad defense. He has the physical tools, and defense is mostly about effort anyway.

In terms of their style, it's hard to know what to expect considering we barely saw their normal guys together for any sort of substantial sample size. Here's what I expect to see though. You're going to get a lot of Russell/KAT P&R. In Russell's 42 games last year he ran P&R a huge 39% of the time. The bad news is he only averaged 0.88 ppp and ranked in the 55th percentile. So he's not great at it in terms of being a scorer, but he does it a lot. I would suggest instead of shooting, pass the ball more the KAT either as a roll man or a pick and pop guy. KAT shot 51% in the P&R, averaged 1.18 ppp and ranked in the 63rd percentile. In other words, running P&R is fine and can be effective as long as the play ends up with KAT shooting more times than not.

Where I'd like to see the Wolves improve is their transition offense. It was basically nonexistent last year. When they did have those opportunities, they stunk coming in at the 20th percentile. Considering they play at the 5th fastest pace in the league, that needs to get a whole lot better. You have the athletes to not be dogshit in transition. The thinking being if they improve defensively, that helps spark easy transition points, boom you're better in that area. This is where I think Pat Bev can really help, especially on the perimeter.

So realistically, what can this team do? Looking at the West, they are stuck in that group with NO/SAC. They can beat you on any given night, but sustained success is yet to be seen. Who is going to drop out (barring injury of those top 10 seeds? Really it's just SA in theory, but they always seem to be way better than you think during their rebuild. The Wolves were 10 games back of the 10 seed last year, so even if they bump that up by 10 wins which would be massive, it doesn't guarantee a spot in the play in. At the same time, a 10 win increase would be a step in the right direction. My guess is we see a more competitive team, and someone that flirts with the 10-13 seed. Unless they somehow become lock down defenders, I reserve the right to adjust my thinking.