The Manager Of The Year is mainly a symbolic award. The manager who manages the team that happens to be the best story usually wins the award. For instance, last year during the Covid year, Don Mattingly won Manager Of The Year in the National League for getting the Marlins to the postseason for the first time since 2003. It was a remarkable story, but is there anyone who thinks Don Mattingly is an elite manager? And it's understandable why the Manager Of The Year is a symbolic award because, unlike Cy Young or MVP, there aren't a whole lot of advanced metrics that you can go on when judging how good of a job a manager does. The Detroit Tigers will not win the A.L. Central. They will not make the playoffs, and unless this hot streak Detroit is on continues, they probably won't even finish .500. To me, that doesn't matter because A.J. Hinch should be American League manager of the year.

As much as some people, even some Tigers fans, deny it, A.J. Hinch inherited a mess at the major-league level. Did he inherit a better situation than Ron Gardenhire did? Probably, but that is mainly because the farm system is far better than it was back in 2018. That means nothing at the major-league level. I'm excited for Spencer Torkelson, Riley Greene, Dillon Dingler, and Jackson Jobe. I believe they're all exceptional talents, but none of those exceptional talents played a game for the Tigers this year. When you look at this year's Opening Day roster for the Detroit Tigers, you see a roster that was made up mainly of unproven youngsters or past their prime has-beens. There were a few notable exceptions with guys a Jonathan Schoop or Jeimer Candelario. Still, for the most part, it was at best a bottom ten roster in all the baseball, and how they played throughout the first month of the season was a reflection of that. The 9-24 start that the Tigers got off to was the definition of a disaster. When they were pitching well, they weren't hitting well. When they were hitting well, they weren't pitching well. They weren't playing good defense, and they weren't fielding the ball. It was the worst month of Tigers baseball during a rebuild that has seen many worst months. As of the time of this blog, the Tigers are 64-54 since that dreadful start to the season. That is good enough for an 88 win pace over 162 games. Considering the roster's makeup and considering where they've been, that does not make sense to me. This team has won series against the Yankees, Red Sox, Blue Jays, Reds, Brewers, Rays, and White Sox during that span. Detroit has played 11 games in a row against first-place teams, and they are 8-3. And you can't chalk it up to luck. Several players have overachieved, but this is a pitching staff that innings limits and injuries have decimated. Casey Mize and Tarik Skubal are only allowed to go three innings a start for the rest of the year, a decision that I support. Spencer Turnbull, who appeared to be an emerging ace, tore his UCL several starts after throwing a no-hitter against the Seattle Mariners. Matthew Boyd, flaws and all, was one of those team's most stable starters over the last several years. He has missed most of the season. Julio Tehran started the year on the Opening Day roster. He pitched all of five innings for the Tigers this year before getting injured. The pitching has found a way to stabilize itself with what is at best an unproven roster. That is the result of some great coaching, coaching that A.J. Hinch brought in.

So how is that happening? How was a team below the bottom of the barrel playing with and even beating some playoff contenders? The big reason for it is that there's been a ton of turnover on the roster. A.J. Hinch has much more say about who is on the major league team and who isn't. He'd admitted to having asked for guys like Derek Hill to be called up. He was also insistent that Casey Mize make the Opening Day roster despite his poor performance in the Spring. This team has trimmed a whole lot of fat off the roster over the last several months. Most of that fat trimming has made way for the youth movement. Having a roster of unproven, young players is an exciting prospect for the future, but it doesn't always bode well for the present. This year, surprisingly, it has. Players like Akil Baddoo, Eric Haase, Casey Mize, Tarik Skubal, Gregory Soto, and Kyle Funkhouser have had good years. Even the players Detroit expected to be their "good guys" coming into the season have gone above and beyond. Jeimer Candelario and Robbie Grossman have had their best years as professionals.

As the title of this blog states, I don't believe that A.J. Hinch will be the Manager Of The Year in the American League. It's all subjective, and I can't begrudge anyone who thinks that Servais, Cash, Cora, or Montoyo deserves the award. But the biggest reason why I'd still put Hinch ahead of them is that I think that the intangibles that make Hinch an exceptional manager are not things that a win/loss record can necessarily show. I've watched a whole lot of Tigers baseball over the last several years. During this rebuild, I've watched many teams that didn't know how to win and didn't think they would win. That is so demoralizing as a fan to know that you root for a team that won't succeed unless the other team lays an egg. A.J. Hinch just made it clear from day one he has no time for tanking. He wants to win every game. He thinks they can win every game, and while it may have taken a month plus and a whole lot of roster moves, I think he's finally compiled a roster full of players who believe they can win every game. You can draft, scout, and trade for as many good players as you want, but you will not have a winning culture if none of those guys know how to win. You have to be all in, and this roster, as flawed as they are, are all in. This was a team that seemed destined for another excruciating 100 loss season. When the fans panicked, A.J. didn't. This Tigers team has overshot expectations at every turn since April. The goal was to stay out of last place, and right now, they're a game out of second.  The game planning is there. The preparation is there. They aren't a good team, but they are a stable one. And to find stability during a rebuild that has been defined by instability is a remarkable feat for a manager that Detroit is lucky to have. 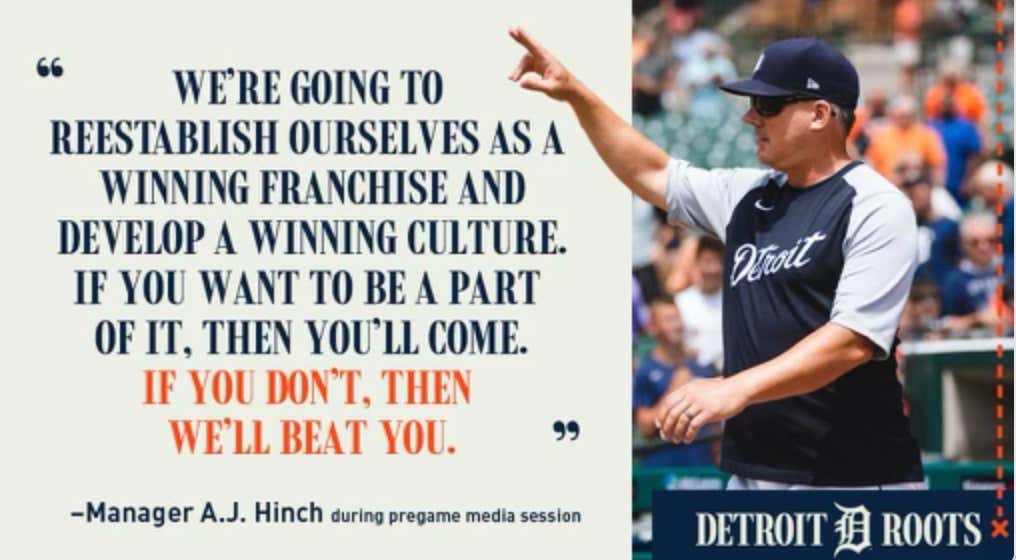