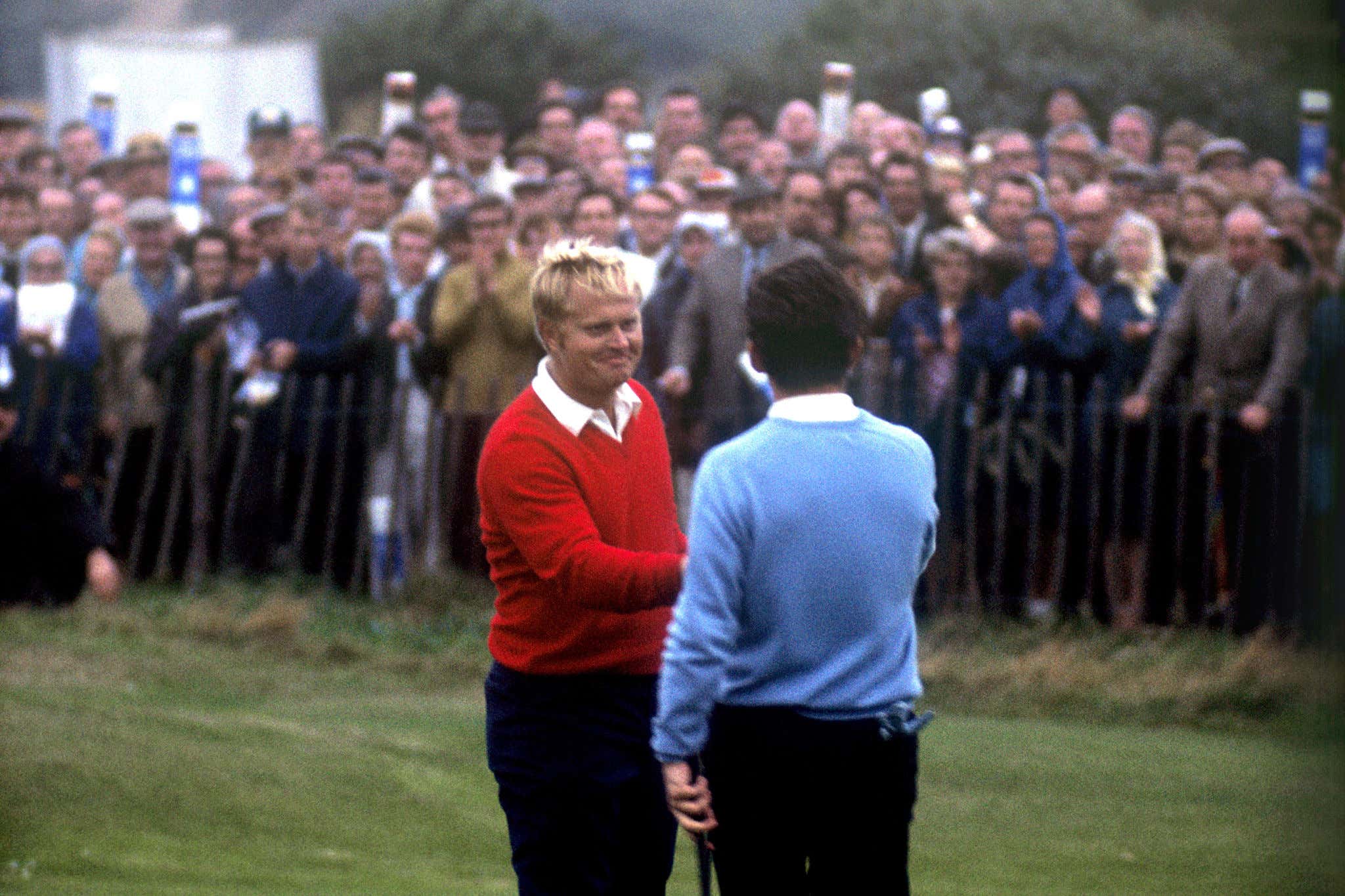 Some people might call that the greatest handshake in golf history. Others aren't aware it happened. This is a blog for the latter.

Hopefully you're taking in the Ryder Cup coverage on this gorgeous Friday. It's such an amazing sporting event (much less golf tournament) that elevates the sport to a different level of excitement. New or old, novice or familiar, you can appreciate what makes this biannual event unique.

There's the 4-man alternate shot. The 2-ball. The home team having the tee-sheet advantage and control over the boxes and pins. You get a rowdy crowd and impeccable venue that I reviewed earlier today. And then of course there' s Match Play and all the shit that comes with it.

Amongst "all the shit" though, I think the best aspect is conceding putts. There's something so natural and amateurish about telling the other guy You're Good. Probably the best phrase you can hear on a golf course when you're struggling with the flatstick. Nothing sucks more than playing against a group that makes you putt everything out. I know my handicap could use it but let me walk around with some confidence. Give me a chance to feel good about myself.

I'm not alone. Everybody, everywhere, loves picking it up.

And when it comes to conceding putts, there may be no more important concession than the last match between Jack Nicklaus and Tony Jacklin. If you're unfamiliar, be prepared to overdose on sportsmanship:

The Ryder Cup - Nicklaus' concession is now widely regarded as one of the greatest acts of sportsmanship ever seen in golf or anywhere else and many, including Jacklin, believe it set a tone for the event that lasts to this day.

The United States had won 12 of the last 13 contests and no player from Great Britain or Ireland had won a Major Championship since Max Faulkner's victory at the Open Championship in 1951.

Jacklin's lifting of the Claret Jug in July 1969 ended that long run and while the Americans arrived at Royal Birkdale as favourites for a sixth consecutive victory.

The contest remained close and with 31 matches completed, it was  15½-15½ and all came down the anchor match between Nicklaus and Jacklin.

Nicklaus was one up as the duo played the par five 17th and while they both got on the green in two, Jacklin holed a monster putt for an eagle to take the contest to the last all square.

After both men hit the green at the par four in regulation, Jacklin left his putt two feet short, with Nicklaus sending his four and a half feet by.

Nicklaus holed his second putt to guarantee a half and later said:

“I don't know why but I very quickly thought about Tony Jacklin and what he had meant to British golf. Here he was, the Open champion, the new hero, and all of a sudden it felt like if he missed this putt he would be criticised forever.  This all went through my mind in a very, very quick period of time and I just made up my mind, I said, 'I'm not going to give Tony Jacklin the opportunity to miss it. I think we walk off of here, shake hands and have a better relationship between the two golfing organisations is the right way to do it'.”

As he took his ball from the hole, Nicklaus also picked up Jacklin's marker and the pair walked off the 18th with their arms around each other.

The match finished 16-16 and while Nicklaus and his team-mates took the Cup back across the Atlantic, he left a memory and a spirit that will be present in Ryder Cups to come.

I'm not trying to be a pussy. I'm just saying that's such a good story about Jack Nicklaus being an ambassador for the game. Sure Jacklin probably makes the putt. But there's something about tipping your cap to your opponent after grinding it out for 3 straight days in one of the most pressure packed environments in sports. The respect and camaraderie out there is unmatched.

Here's a nice little video on the exchange and what was going through the players' heads.

I'll keep this spirit in mind next time my opponent has 3 feet to win a scotch doubles for $0 because I don't play for money because I'm a responsible gambler. But if I did play for money, I'd have a great attitude about conceding putts. We all should.