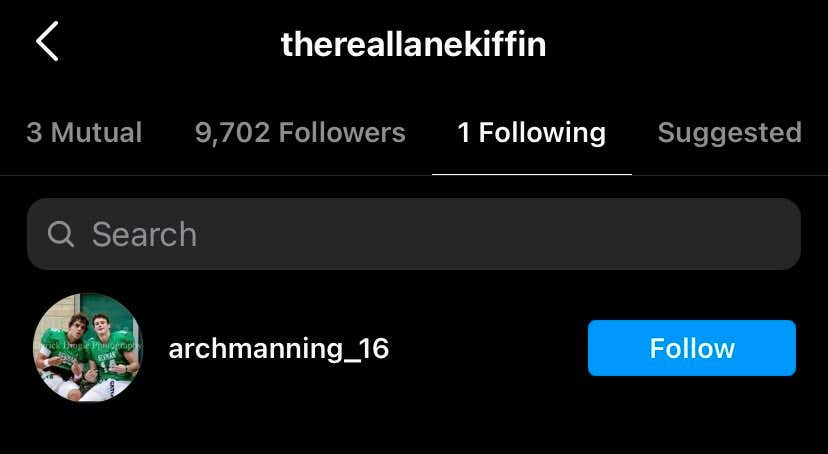 You can accuse Lane Kiffin of a lot of things, but being a bad recruiter ain't one of them. Kiffin posted his first picture on Instagram less than a week ago and he only follows as many people as posts he's made, because there's only one thing in the world he wants: Arch Manning.

Kiffin came to Ole Miss and transformed Matt Corral from a serviceable quarterback to the Heisman frontrunner. Imagine what he'd be able to do with one of the most prized recruits of all-time.

Regardless of whether Arch becomes the latest Manning to play at Ole Miss or decides to go to Alabama or Georgia, you have to appreciate Kiffin putting on the full-court press. Manning knows every school wants him and all the programs he's looking at have negligible differences in terms of facilities, ability to win a championship and be prepared for the NFL. Something like this, as trivial as it seems, could actually make a difference to a 16-year-old kid. Nick Saban's life will go on if Manning goes to another school; Kiffin at least wants it to appear that his will not.

Manning's visit to Georgia last weekend was the talk of the town. I imagine things will only be that much more amplified when he visits Tuscaloosa — with the Rebels in town — on October 2 and heads to Oxford on October 23.