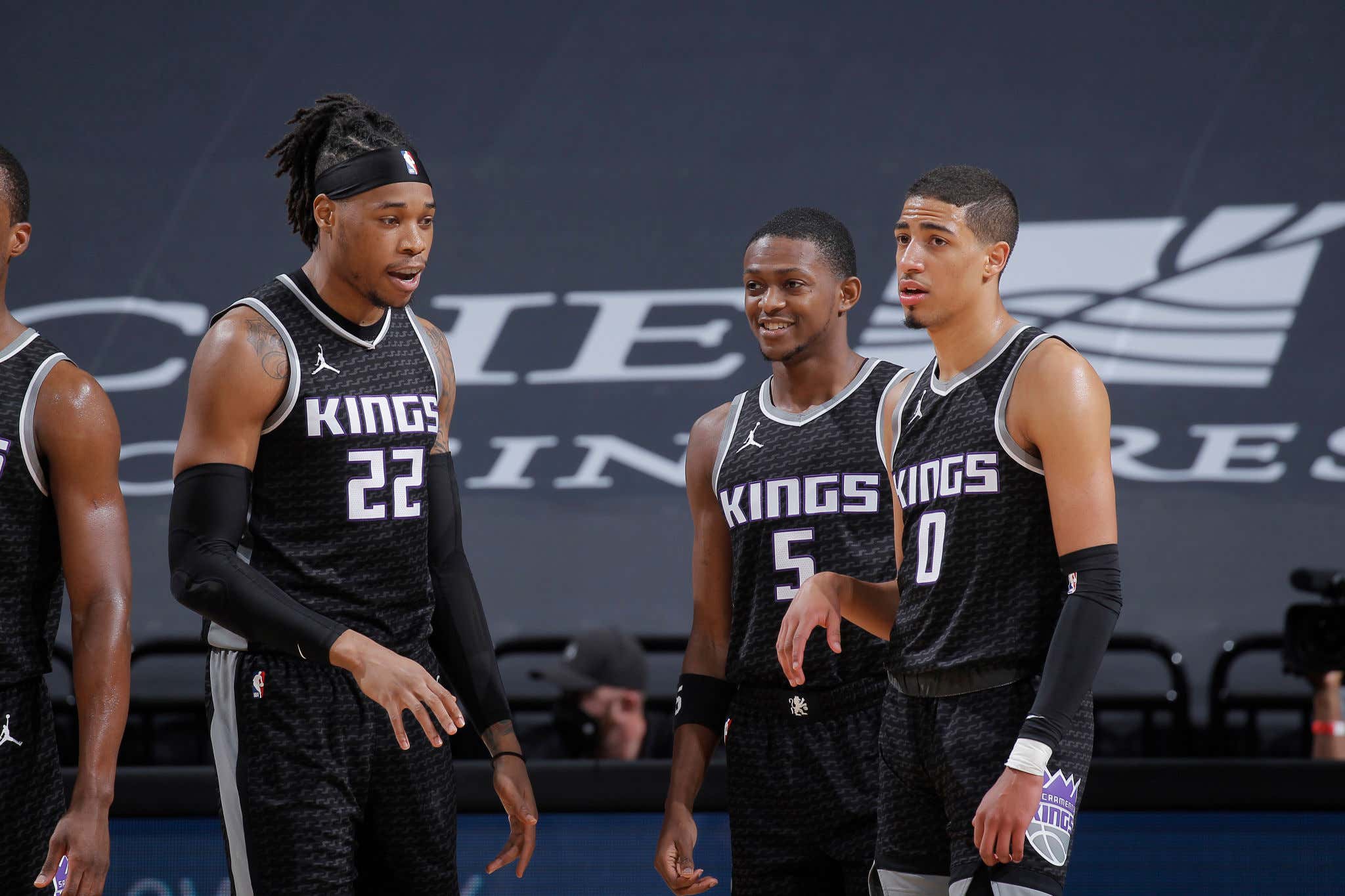 If I were to ask you who the most tortured fanbase in the league is, how many teams are you putting ahead of Kings fans? The fine people of Sacramento who love this team deserve better. Allow me to put this into perspective for you quickly. The last time the Kings made the playoffs, Mike Bibby was their leading scorer. Ron Artest was playing 40 minutes a night. It's been nearly half of my life since we've last seen the Kings in the postseason. That year was 2006, which makes it a 15 full years this team has been in the lottery. The next closest playoff drought? The Hornets at 5 years. The Kings drought is 3x as long! It's a little wild when you see it written out like that. To think the last time the Kings were in the playoffs came when I was a sophomore in college is both outrageous and extremely depressing. That was so long ago. Think of how much of your life has changed since the summer of 2006 and yet for the Kings and their fans, the fact that they remain on the outside looking in when it comes to the playoffs has been the one constant.

Since 2006, they've never won over 39 games. It's remarkable really. Especially when you compare it to how legit they were in the late 90s/early 2000s. They were a lock for 50+ wins a year. From 2000-2004 they never won fewer than 55 games. How it is possible that over a 15 year span you don't even have one prayer season where everything goes your way and you end up as like the 8th seed or something? So I feel for Kings fans those loyal bastards. They love this team no matter how brutal they've been over the years. If you look at their attendance in the 2019-20 (when shit wasn't fucked up) season, they had a 95.5% attendance rate. That's not bad!

But here's the thing. Maybe I'm crazy, but I sneaky like this Kings team. There is real talent there. Luke Walton might be a buffoon, but from a player talent perspective, this roster isn't a disaster or anything like that….in theory. One of these years they are going to break through and at least be competitive. Can that be this season? Let's talk about it.

First, here is their roster as it stands today and all the important moves they made this summer 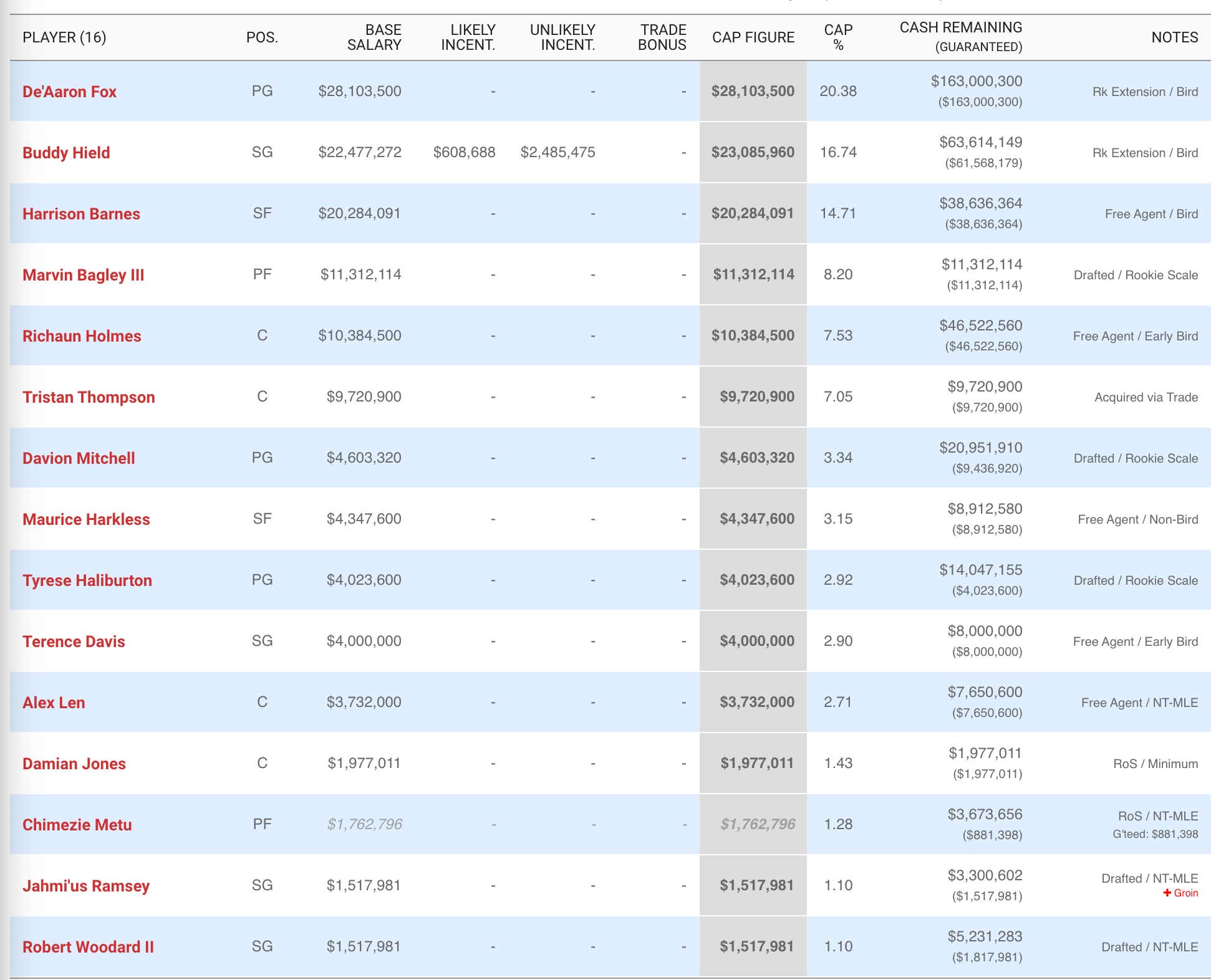 At $130,373,354, you're looking at the 18th most expensive roster in the NBA. Ideally, if you're close to league average in terms of payroll, my guess is you would think you'd be close to contending for a playoff spot. I suppose technically that was true last year as the Kings finished 2 games out of a play in 10th seed, but at 10 games under .500 on the year, that's not great. But to my point about player talent, there are legit names on this roster. De'Aaron Fox is a legit All Star talent. In my opinion the only reason he hasn't made one yet is because of the conference he plays in. You put up 25.2/3.5/7.2 on 47% shooting at age 23, I'm going to think of you as an All Star talent

But it's more than just Fox. Harrison Barnes and Buddy Hield are both solid wings. They have their flaws for sure, but I wouldn't call them disasters. Tyrese Haliburton was arguably the steal of last year's draft. Richaun Holmes is an extremely underrated player that you probably don't know about because he plays for the Kings. If he was on a big market team doing exactly what he does now, you would know who he is. Then there's rookie Davion Mitchell who looks like he's going to be a beast defensively pretty much right away. With all that individual talent, what's the problem here?

Well, there have been some misses. Marvin Bagley ain't it. Maybe he will be on a different team, but his Kings tenure has been brutal. Sure he's young and could turn things around, but it may be one of those situations where he doesn't truly show signs until he's on his next team. I'm also looking at that roster and I don't love their big man depth outside of Holmes. I just lived through Tristan Thompson so I can tell Kings fans that shit is rough, Alex Len is not great and once the starters come out there is certainly a real drop off in talent. The Kings were 25th in bench points last season, but part of that is due to the fact that they had the 2nd lowest bench minutes in the league. Not having any sort of legit depth is obviously an issue.

Here's the encouraging sign if you're a Kings fan though. There's a foundation already in place of a team that might be able to take a leap as their young talent progresses. For example, take a look at their two most used lineups last season

That's….kinda good? I mean don't get me wrong, defensively that's pretty gross, but a couple of 120 Ortgs and +7 net ratings? You can build on that. Numbers like that tell me that it's not like things aren't working, the Kings problem is the fact that they can't stop a nosebleed. Then you realize this makes sense since the Kings finished 30th in the NBA in defense. In terms of opponent's points, they ranked 28th at 117.4. Opponent's FG%? 30th. Opponent's 3P%? 26th. Does it make a little more sense as to why they drafted the best perimeter defensive player in the draft despite having two point guards on their roster? There are some guys who are just never going to be elite defensively. Like, Buddy Hield isn't going to magically turn into an All NBA defender. But can he find a way to only be sort of terrible rather than a complete disaster? That might not sound like much, but it would make a big difference. De'Aaron Fox is incredible when it comes to steals, but opponents shoot 45.5% against him. Things are even worse for Harrison Barnes, who holds opponents to 48.8% shooting. They need their best players to actually give them something on that end if they ever want to think about getting over the hump and into the play in.

Just think of what the West looks like right now. Oh cool, you're the Kings and you can score a bunch of points. That's awesome. Good thing every other team in the West can do that shit too. Of the top 10 seeds last year, you would think the Spurs might drop, but then what? Even with Kawhi/Murray out the Clippers and Nuggets aren't going to drop out of a top 10 spot. So until the Kings can prove they've taken steps forward defensively, how can you expect anything to change? We know this team can score. They play at a top 10 pace in the league and had an offense that ranked just outside the top 10. But you aren't winning shit if you're trotting out the 30th ranked defense in the NBA. That was a pretty big drop off from their 19th ranking in 2019-20. The previous year they were around the same range in their 39 win season (21st). You go further and further and it's the same story. A 27th finish in 2017. A 26th in 2016. A 22nd in 2015. You get the point. If you want to explain why the Kings can't ever break their playoff drought, all you have to do is look at the defensive end.

In terms of their style, you're still going to see a lot of P&R offense with Fox running the show. They ran that shit at a 20.0% frequency which was good for 9th most in the league, ranking in  the 65th percentile. What the Kings are though are beasts in transition. They ranked in the 100th percentile in transition offense. Remember, they play fast as shit. Their 1.21 points per transition possession was #1 in the NBA. Their transition score frequency was also #1. You let this team get on the break, they'll beat you. And look, sometimes Buddy Hield will go on a shooting tear and look like a guy that will never miss

but there's no denying that when it comes to Hield and probably even Barnes and Bagley, there is off the court shit to factor in as well. At the deadline last year, the Kings refused to be sellers. They wanted to see what this group could do in a normal year. Fast forward to the summer, and now people were for sale? Very confusing. They could have gotten a larger return at the deadline and they sort of ruined their own leverage. Very Kings of them. Hield wants out, Bagley wants out, they have a decision to make on Barnes who will only have 1 more guaranteed year after this season or risk losing him for nothing, it's not a great locker room vibe right now I imagine. The Fox/Haliburton/Mitchell/Holmes group is locked in and legit, but there are still giant questions for the rest of the roster.

Then there's the coach. This has to be Luke Walton's last shot right? He's 62-82 in his two seasons. What has he shown in terms of developing this team defensively to help them get over the hump? They probably should have just kept Dave Joerger coming off that 39 win season but what do I know.

All in all, if the Kings can make any sort of improvement on the defensive end with Davion Mitchell now in the mix, this team should be better. I'm not even saying they have to be a top 10 defensive team. Just don't be last. Get back to being in the 18-21 range. That's how you can find yourself in play in contention, and then who knows. Anything can happen once you get invited to the party. But if they don't, it'll be the same old story. A ton of points, some great offensive highlights, but another season in the lottery for the 16th straight season.