Would you look at that. Here we have an extremely accomplished player, someone who has multiple MVPs, a DPOY and a shiny new championship ring/Finals MVP putting in the work to address one of his major flaws in the offseason. He's arguably already done enough to punch his ticket to the Hall Of Fame by the age of 26. Depending on what team you're a fan of, you might be under the impression that the offseason is absolutely not a time to work on your game and turn a weakness into a strength. If I were a Sixers fan, this would annoy the shit out of me. Here's Giannis, a direct competitor in the East, doing everything he can to improve his shooting all while Ben Simmons refuses to do shit other than threatening a holding out. That's unfortunate.

The thing that makes it really hard to not love Giannis is his mindset when it comes to this stuff. This dude airballs FTs on the regular, but he doesn't change his approach by shying away from contact or touching the ball late in games. He embraces the challenge. He has the guts to take threes because he knows it will help the rest of his team if defenses have to respect his jumper.

Here's the thing. Giannis' jumper wasn't always fucked up. In fact, early in his career he was very passable as a shooter. He shot 34.7% from three as a rookie and his form wasn't that bad! Somewhere along the line of his development, shit got all messed up

Despite that, Giannis has still been able to become one of the most dominant forces the league has ever seen. Can you imagine what he looks like with even a league average jumper? Terrifying. I'm not even saying Giannis has to become elite, or even very good. Just becoming league average will be devastating for defenses. Giannis shot 35.7% on midrange shots, 27.3% from the corners and only 30.5% from the above the break. Looking at his shot chart, there are a lot of areas to improve in terms of his range 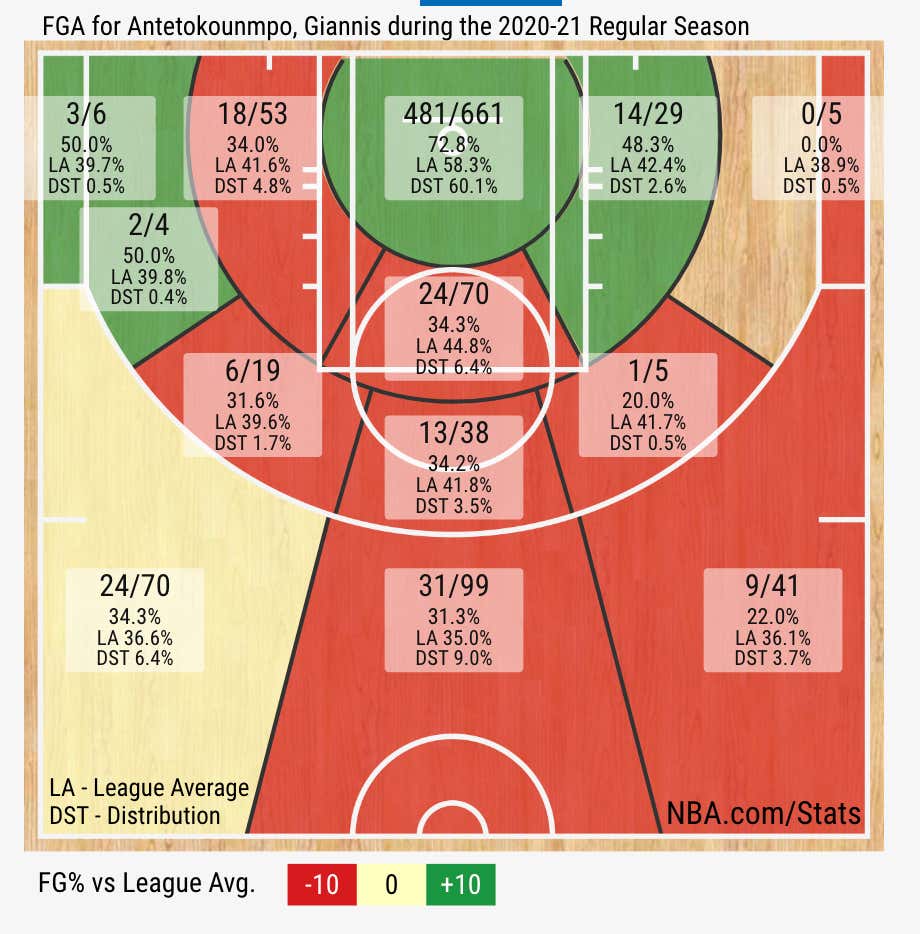 Look at all that red where he's below league average. If he's coming into next season with an improved jumper, is it crazy to suggest some of those zones might improve? If so, then what? All you can pretty much do at that point is pray.

As a Bucks fan, boy would this have me over the moon. You're definitely still riding high coming off your first title in a billion years, but this would take things to another level. The best player on your team is not complacent. He knows he has a weakness and he's willing to put in the work to correct it. Not just for his individual success because Giannis can dominant even without a consistent jumper. This is for the betterment of the Bucks as a team. That's everything fans want from their franchise guys.

Some players get this, others don't. It's why some find themselves at the top of the mountain while others…..not so much.