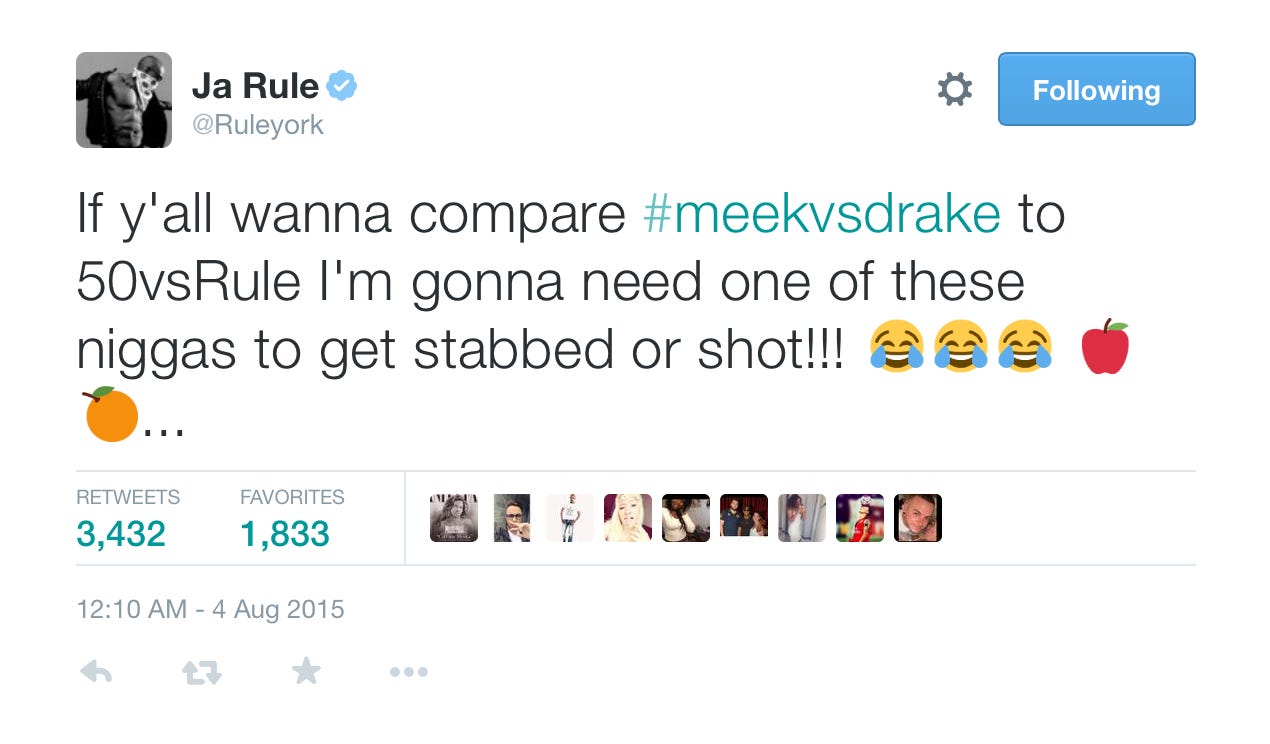 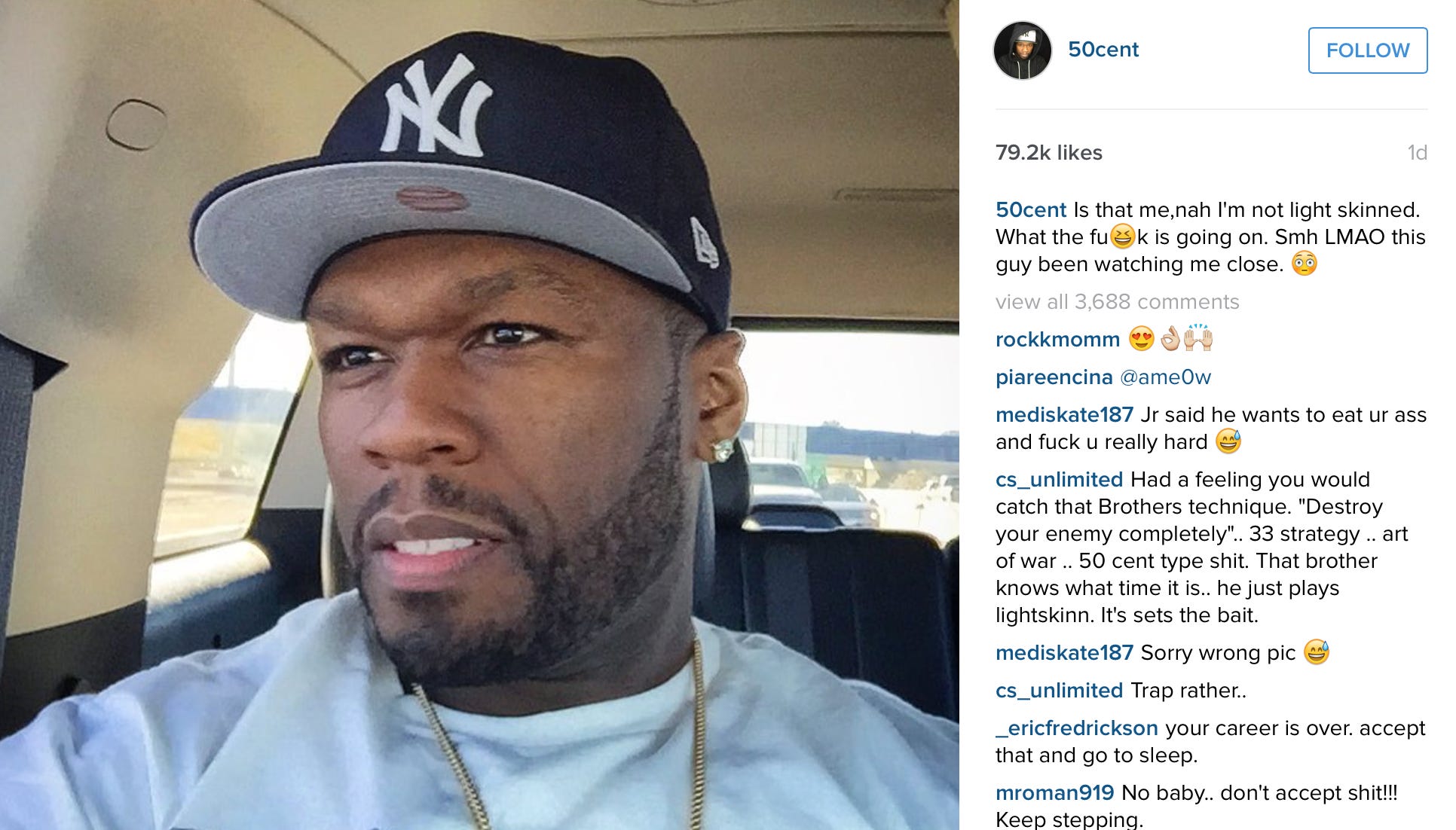 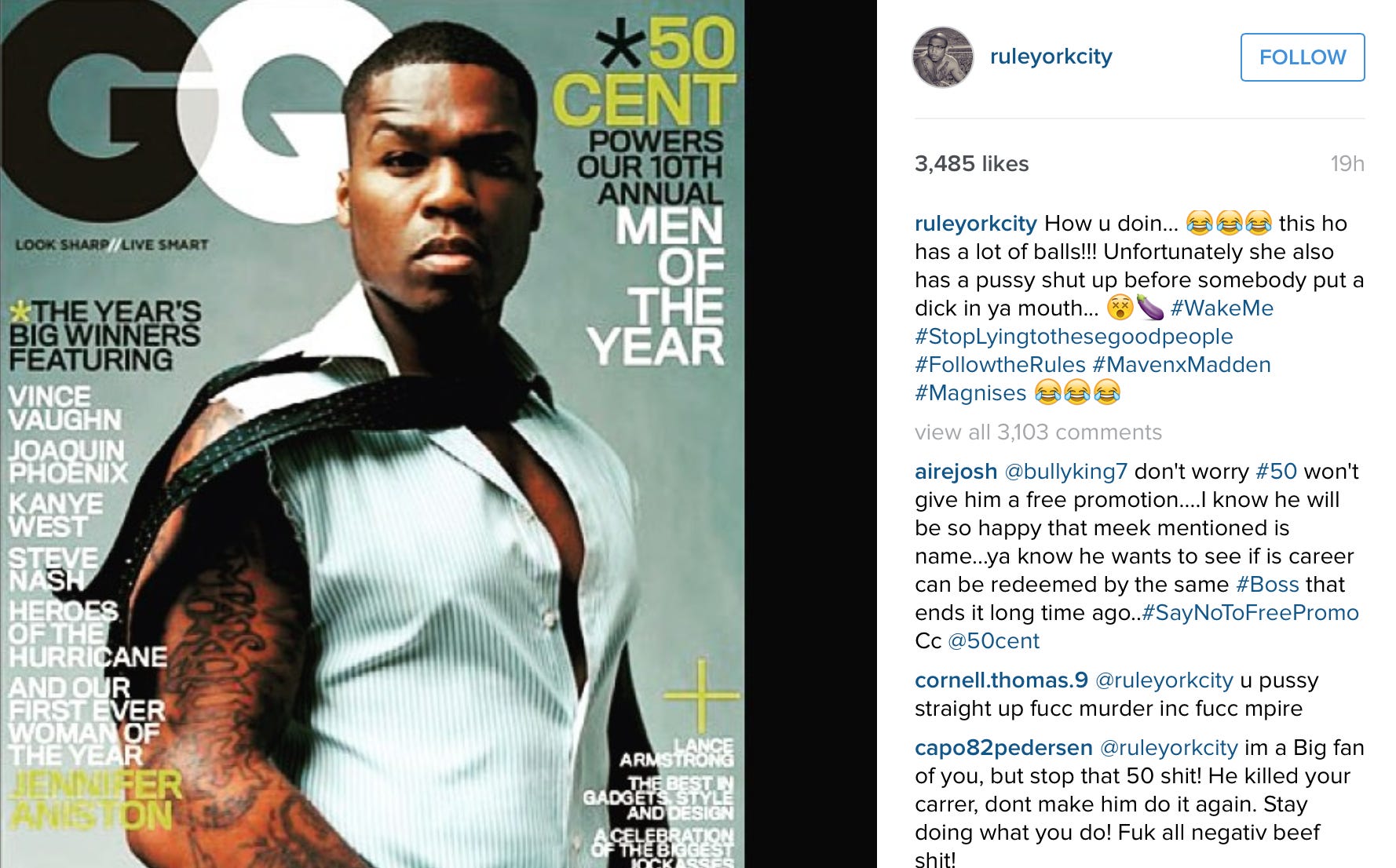 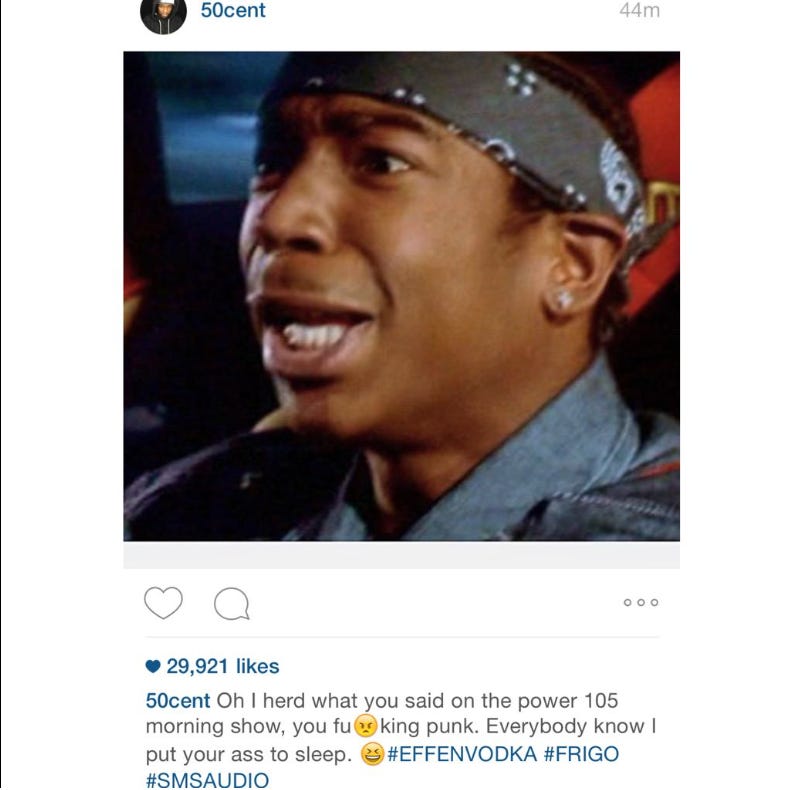 Well this has me feeling downright nostalgic.  The Drake/Meek Mill beef has been fun if not for the simple fact that Meek might be dead.  Literally.  His career surely seems to be dead. Drake picked him apart piece by piece and last night Meek went on stage and talked about how he’s gonna give Drake a wedgie.  Cool, man. That falls on deaf ears when it’s coming from a dead man.  The difference between Drake saying Meek is riding the coattails of his more-famous girlfriend and Meek saying he’s gonna give Drake a wedgie is that only one of those is true. And the truth hurts way more than saying outlandish things simply to say outlandish things.  Meek can’t sleep at night because of the truth bombs Drake dropped on him.  Drake wins.

But the 50 Cent/Ja Rule beef?  That was the rap beef of my generation.  Two guys from the same neighborhood.  One guy being a fake tough guy and the other being a real tough guy.  New York, bullet proof vests, stabbings, diss tracks and LOTS of empty threats. Fat Joe and Jadakiss even got involved at one point.  People my age were too young to fully experience the Bad Boy/Death Row beef so the G-Unit/Murda Inc was as close as it got.  I was that white kid at every high school who wore G-Unit shirts.  No apologies.  Team G-Unit all the way.  I still listen to Beg For Mercy a couple times a month.  To be completely honest, the 50 Cent/Ja Rule beef more mirrored this Drake/Meek thing. It was fun but it was never really a contest.  Ja Rule seems to be going through what we would call revisionist history because 50 Cent downright murdered Ja’s career and his record label.  He went from multi-platinum albums and sold-out concerts to be a laughing stock in the blink of an eye.  It was incredible.  I love Put It On Me and Between Me And You as much as the next middle school kid from that age group trying to get a hand job but if I’m Ja the last thing I wanna bring up is 50 Cent.  I guess over the course of 10 years he forgot what happened.

As soon as Get Rich Or Die Tryin’ and this song came out, Ja Rule and the whole Murda Inc crew disintegrated.  I literally don’t think we’ve heard from Charli Baltimore, Ashanti or Irv Gotti since then.

And yes, it’s soft as fuck that these two started trading barbs again on Instagram.  It’s one thing for guys like Drake and Meek to do that because that’s their generation. 50 and Ja coming from a time when they were wearing kevlar vests and getting popped on weapons charges is super soft.  But famous people, rappers especially, just wanna be in the limelight again for even a second.  That’s all this was and I loved every second of it.  Let’s do it again some time.