It was a makeup show from what was originally scheduled for July 26, 2020, and then again July 21, 2021 but cancelled and postponed due to Covid.

And it couldn’t have worked out better. It was a perfect 80 degrees, with clear skies and next to no humidity.

It marked the 11th time I’ve got to see the band perform since officially reuniting in December 2015, and announcing their first official tour in March 2016. White Sox Dave and our camera guy Tom both love the band but had never been to a show so this was their first.

I fell in love with the band as a kid. My childhood friend Nathan’s older brothers, who I thought were the coolest guys on the planet, introduced us to the Illusion albums and I was hooked. When my mom forbid me from listening to them (“you are not to listen to this rubbish”), I became an even bigger fan.

I’ve read everything I could get my hands on about them. With Steven Adler’s autobiography, Slash’s autobiography being the two best. And prayed for ever that they would get back together so I could just see one show live.

I didn’t get to see them at Coachella (I hate that festival), and didn’t get to see their Vegas kick-off show (tickets were impossible to get, and going for like $500 on stub hub). But I went to the next show which was in Detroit at the new Little Caesars Arena (a bad ass fuckin arena btw). Followed that up with a couple shows at Soldier Field, Gillette Stadium, Milwaukee, Cleveland, St. Louis, and ACL.

Those first few shows back in 2016 left me in awe.

For a band that had been touring disjointedly, before Duff and Slash rejoined, they were extremely tight. And polished. There was zero rust. It seemed like they never broke up.

And Axl’s voice was amazing. He looked like a lesbian version of Carrot Top, but his pipes were off the charts.

I saw them at ACL a couple of years ago followed by their United Center show and you could tell Axl was showing signs of fading. It wasn’t bad by any means, but he wasn’t going after those high notes like he used to.

Heading into last night's show I mentioned how epic of a night it was going to be on Twitter and the boo birds came out.

“Wait til you hear how bad Axl sounds”

I’m a glass half full kinda guy so I brushed them off as miserable people who just love to bitch doing just that. But I'd be a crazy person, or stubborn bitch if I didn't admit they were right.

But before we get to that, we got to the park around 6:30 because I wanted to catch some of Wolfgang Van Halen and Mammoth's set. I was shocked at how big he is, and how big his voice is. A few of our friends in the group had no idea he was the son of Eddie Van Halen (r.i.p.) and commented on how good he sounded which was a good litmus test.

Their set wrapped up around 7. We had half an hour to get sauced up and down to the pit before Guns n Roses took the stage. 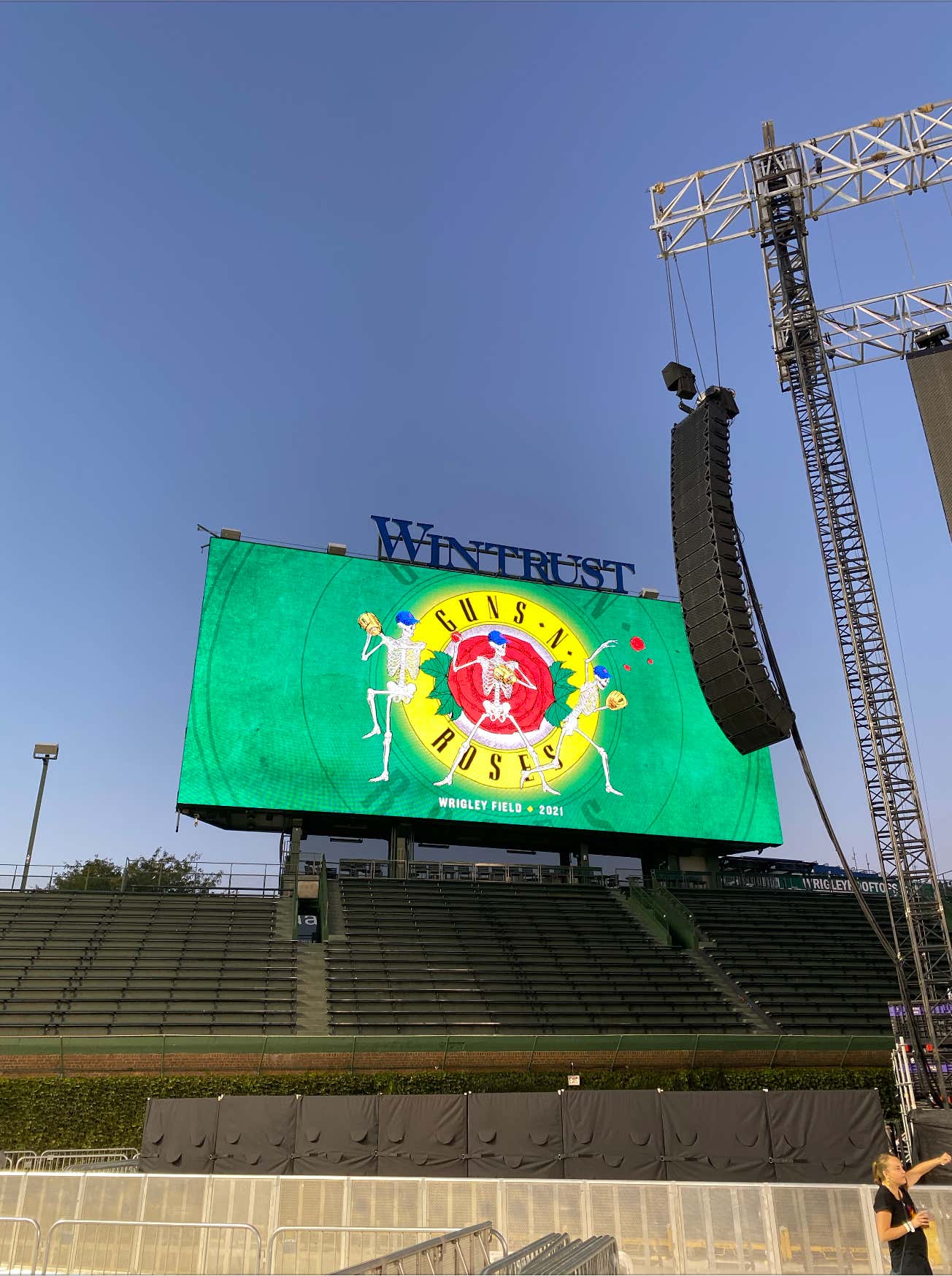 The band took the stage promptly at 7:30 and started things off with "It's So Easy". Which was ironic, because it was apparent from the jump that it was not going to be an easy night for Axl Rose.

Things only got worse during their next song, "Mr. Brownstone" where it became crystal clear that his vocal chords are struggling.

The mix also seemed off. So with Axl’s voice struggling, it didn’t help that his channel seemed way lower than everything else in the mix.

It was rough but I wouldn't have rather been anywhere else in the world.

And neither would White Sox Dave or Tom.

When Slash began showcasing what a fucking monster he is Dave was captivated. Beaming from ear to ear. 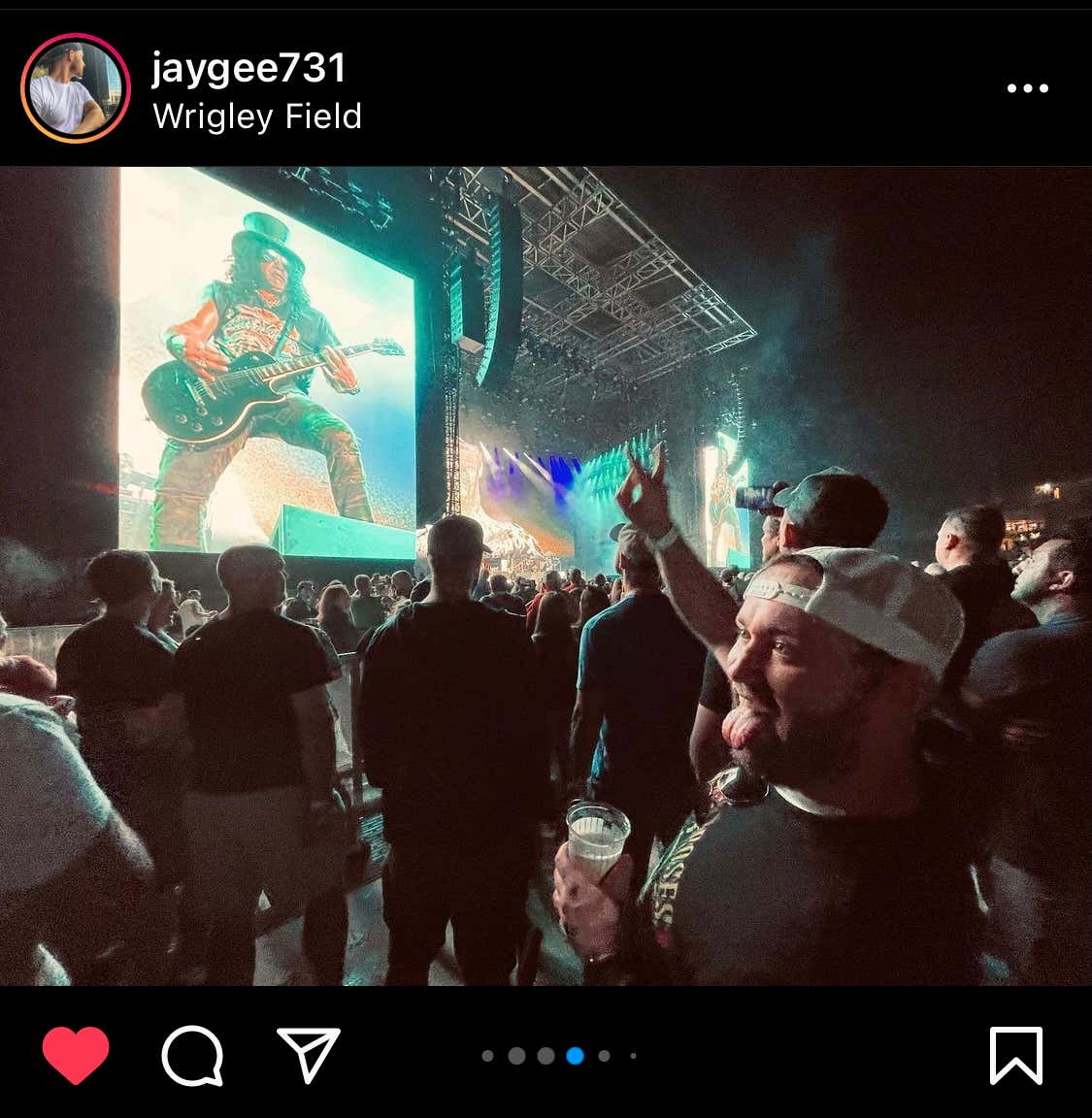 He couldn't stop commenting on how incredible Slash was, and I just kept telling him to wait til later in the show when his mind would really be blown.

(Which he was when Slash pulled off the best solo in rock history in “November Rain”. Don’t @ me)

The band found their footing and Axl got in a groove as they began busting out “Chinese Democracy” and underrated banger “Slither,” from Duff and Slash’s offshoot Velvet Revolver.

They also played their new song they dropped in August, “Absurd”. I thought it was a pretty awful song when it came out, but hearing it live it actually kind of went off.

Highlights of the show for me, because they seemed like Axl's best performances of the night, were “Civil War,” “Patience”, and “Knockin’ On Heaven’s Door”.

Another was when Slash payed homage to Chicago blues legend Muddy Waters with an epic ten minute jam session of “Mannish Boy.”

(On Yom Kippur no less!)

Duff (who might be the hottest guy on the fucking planet by the way) also CRUSHED a cover of The Stooges “I Wanna Be Your Dog”.

All in all, the band ripped off 25 songs over their usual 3 hour set.

Was it the best Guns n Roses show I've ever seen? Not even close. But you know what? Who fucking cares? It was Guns n Roses, live and in the flesh. At Wrigley fucking field on a gorgeous summer night. It was one of the greatest song writers and vocalists of all time, with two of the greatest guitarists of all time, all on stage, playing together again. And it was THREE HOURS of live music.

I can think of way worse places to be and things to be doing on a Thursday night.

I will say that as hard as it is to, I legitimately feel bad for Axl Rose. The guy is cashed. 5 years of touring non-stop, doing 3 hour shows has clearly taken a toll on his vocal chords. He needs a break. I know the money has got to be insane right now, and the chemistry with the band looks like it's never been better. But a year off to rest and recharge (maybe finish writing a new album?) would work wonders for their live shows.

Here was the setlist from last night -

p.s. - after the show we mozied on down to our buddies place Country Club. White Sox Dave and our guy Bobby Lite opened up Bobby's guitar case (he travels with one now apparently) and tried to play on the street for passers by. Totally normal. Chaos broke out all around stopping what would have been a great jam session.

As my man Robbie Fox stated, more proof we are living in a simulation- Axl Rose issuing apologies.

He just posted this explaining the vocal issues last night.