Frank stepped into the Stool Streams Stadium an overall 0-15, but it didn't take long to FINALLY end the Fleming Curse against the newly formed Jenga power team - Veegs. While this wasn't a regulation game for Team Generation XYZ (Large, Jake Marsh, myself) this game was more than real for The Frankettes. Keegs is GREAT at balancing and stacking the chaos that is her life, but every rookie that enters Stool Streams Stadium learns that bright lights and The Tower cause mental mistakes. I've seen it happen a million times, I figured this time wouldn't be any different ...

Then on block 18, right around the time you forget the fundamentals, Keegs did what most rookies do their first match and used both hands. (Not good in this situation)

The two handed penalty forced me to pick the first block I touch on Turn 20. I figured I could remove one of the 3 blocks from the base without the tower completely collapsing. I could not have been more wrong.

Where were you when the blocks fell? Frank Fleming is now 1-15 in Stool Streams Stadium. What do you do when you get your first win? The Worm The Salamander!!!

At the end of the day I think everyone came out of this a winner. The Frankettes broke the Fleming Curse, Kelly didn't pull the losing block, and I didn't freak out. I'd call that a win, win … win. 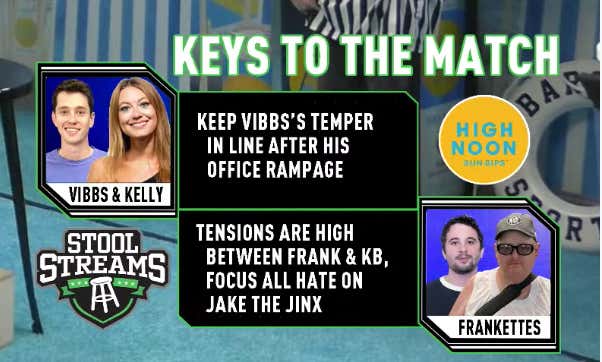 Generation XYZ will be in action next Wednesday on Stool Streams Jenga as Large and myself take on Pat and Rico Bosco from Team Minihane. Barstool Breakfast vs two crazy people. What could go wrong?