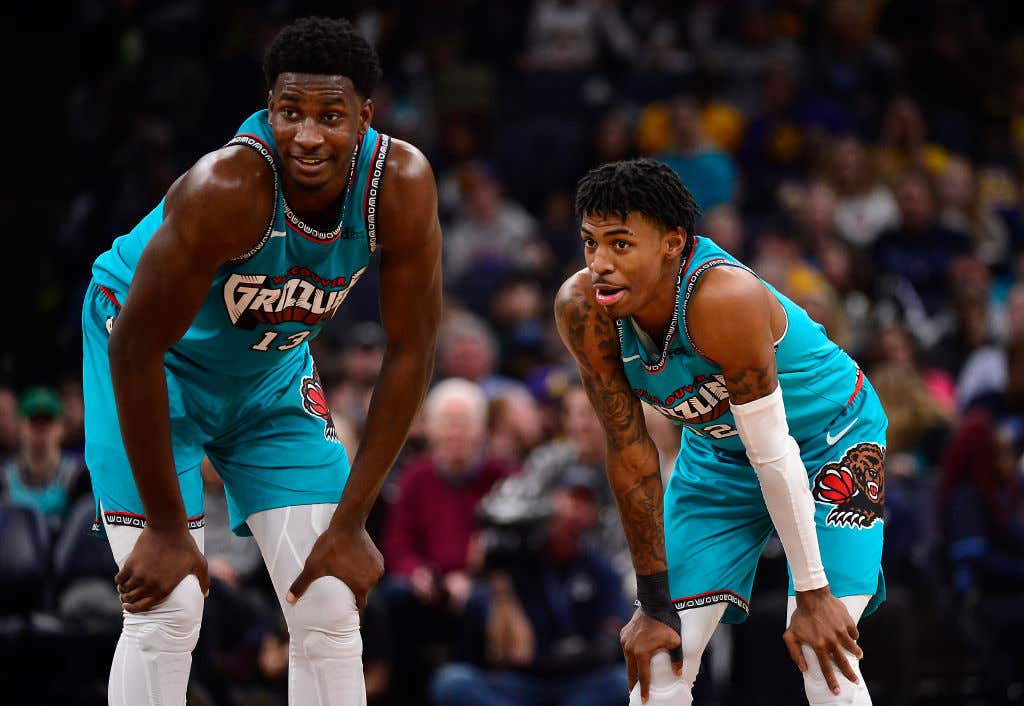 How about the Grizzlies hanging on for the win? Very exciting for them and it makes sense since they are a team on the up and up and clearly the best of this group. I'm honestly a little surprised things were this close because in my opinion the Grizzlies are one of the more interesting teams heading into this season. They are primed for a leap year when you look at their talent and where they are in the league. Guys like Morant and Jackson Jr are entering the stages of their career where we see guys take that next step, and really as a franchise they've been trending in the right direction since 2017-18. They've gone from 22 wins to 33, 34, and then 38 last season when they ended their 3 year playoff drought. While the next step for them may not be title contention, there is a fair expectation for them to make progress and finally get out of the play in life and into a top 6 seed. The West is getting better and better not to mention healthier, so that won't exactly be an easy task.

When you think of a rebuild, there are obviously levels. The Grizzlies now face the first step in that ascension to where they go from a fun, young, upstart team, to a perennial playoff caliber team. Some teams never get there, others make that jump with ease. It'll be fascinating to see which group the Grizzlies fall into.

But first, let's take a look at how their summer went and what their roster currently looks like 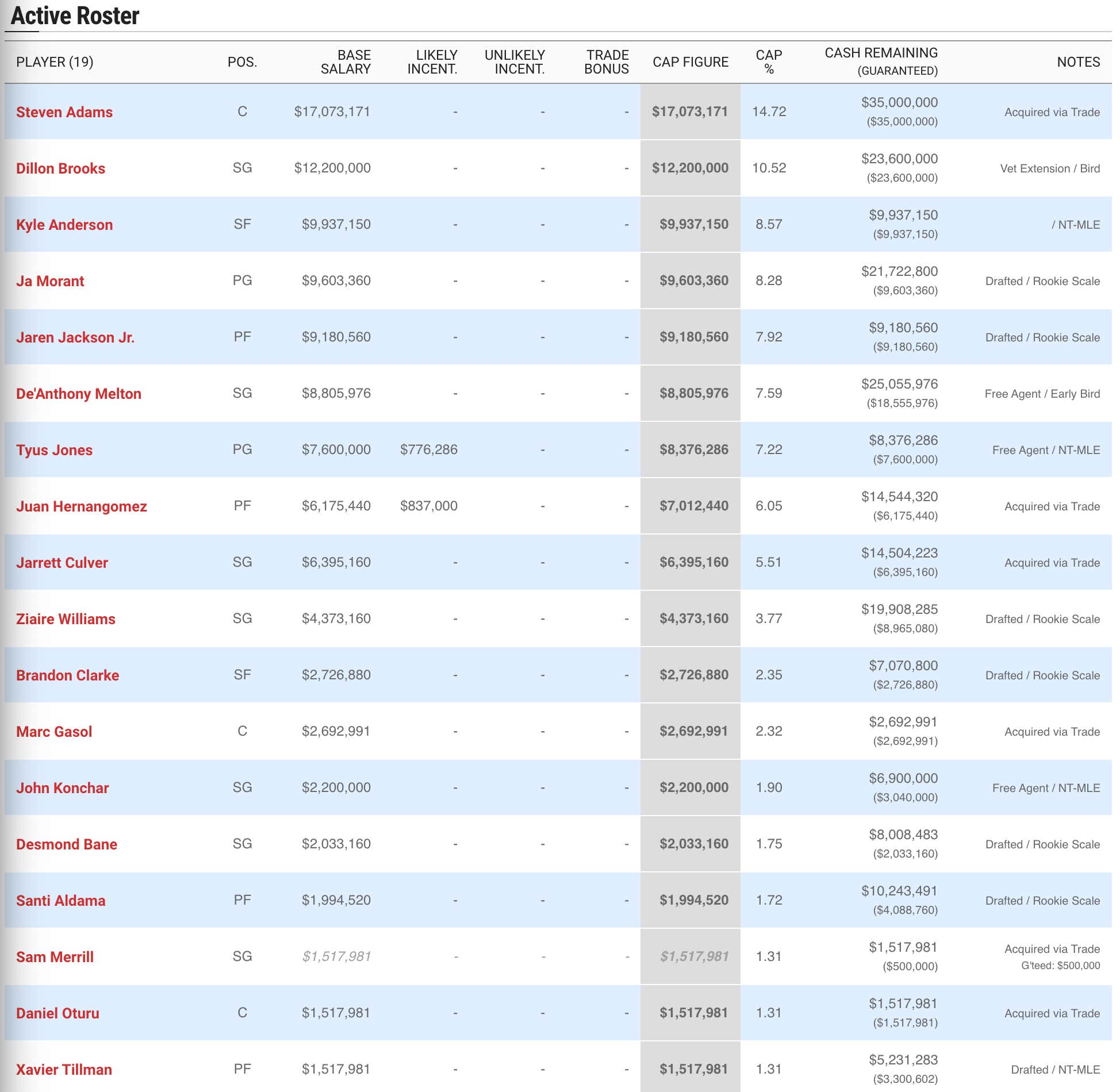 (You'll notice the Juancho/Carsen Edwards trade isn't in this, that's because it can't be made for a few more days)

They certainly started off the offseason with a surprise, and that was trading Jonas Valanciunas for Steven Adams and Eric Bledsoe, who was then traded to the Clippers. JV had been a pretty legit big man during his tenure with the Grizzlies and really seemed to fit their style of play, so swapping him for an older Steven Adams was a little confusing. There was a thought that they made that move in order to move up to 10 with hopes of snagging someone like Josh Giddey, but then he was taken at 6 and they settled for Ziaire Williams who probably would have been there at 17 anyway. It's not that Steven Adams isn't good, he's legit defensively when it comes to post defense, he rebounds and is signed for one extra season compared to JV. But he doesn't stretch the floor like JV, and you can't overlook the chemistry and how that might change/take some time to develop.

All in all, this is the 27th most expensive roster in the NBA coming in at $109,158,757. That's a little misleading because the Morant/Jackson Jr extensions haven't kicked in yet, but that's why if you're the Grizzlies you have to take advantage of this opportunity while you still have it. They really don't have a terrible contract on their books and they are loaded with intriguing young talent. That's one thing you can say about the Grizzlies and something that's so important for small market rebuilds. You have to nail the draft. Between Morant, Jackson Jr, Brooks, Clarke, and Bane, I would consider all of those guys draft hits. Getting legit production from rookie scale contracts is so important, especially when you aren't exactly a hot bed for free agents.

I think it goes without saying that this team will only go as far as Ja Morant leads them. One thing we can say with confidence is that Morant has proved to be "that dude". A franchise player in every sense of the word

Here's the scary part. Morant is doing all this despite not really having a consistent outside shot. He finished just 30% last year and is a career 31.7% three point shooter. As we just saw, that doesn't limit him when it comes to playoff scoring considering he averaged 30.2 points in his playoff debut this year. In addition to his outside shot becoming more consistent, ideally he comes in at around league average at 34%, there are other areas of his game that I feel like can help Morant take that all important Year 3 leap. Did you know he only shot 39% from 3-10ft? Considering of his 957 FGA last year a total of 313 came from this zone, that's important. Outside of at the rim (347), this is where Morant took the most shots from. He's elite at getting into the paint/attacking the rim, but that next step is finishing better in the paint. This is true for a lot of young franchise guys. I know personally I saw both Jaylen Brown and Jayson Tatum have similar issues. In their Year 3s they figured it out and took massive leaps. I see no reason why Morant can't do the same thing.

It might sound crazy, but Morant also sneaky has issues as an isolation scorer. He ranked in just the 56th percentile in isolation last year shooting a tough 40% on those plays. Part of that development will be improving his jumper, making that a more consistent weapon. Where I'm interested to see if there is any difference post JV trade is in P&R. Morant also struggles here which I found surprising. He runs P&R 48.5% of his possessions, yet ranked in the 40th percentile shooting 40.9% as the ball handler. For a guy with his usage, if he can't really produce in isolation and also struggles in P&R yet is this good already, you can see why Grizzlies fans might be excited. If this is the worst Morant will be, that's pretty terrifying. What teams struggle with is preventing him from driving. That's where a lot of his points come from. Of his 19.1 average last year, over 9 points a night were coming off drives and he shot 64% at the rim. That's legit. It'll be interesting to see if his jumper/outside shooting can be more consistent, because if it is there's really no true way to guard this man. You play too close, he can blow right by you. You give him space, he can beat you in the midrange.

As a team, the Grizzlies do have the foundation of a group that tends to make a rise up the standings. It starts on the defensive end, which the Grizzlies ranked 7th last year. As young guys get more experience and then the addition of Adams, I see no reason why this team can't be a top 10 defensive team again next season. Even if we see teams like BOS/CHI/IND make progress on that end, the Grizzlies should still be among the leagues best. Part of the reason they're so good is they contest EVERYTHING. They were 3rd in the league in contested shots, were 2nd in the league when it came to recovering loose balls. They finished 4th in deflections. This is usually the formula for teams on the rise, you lock down defensively first and the offense comes second as young guys develop. There's a reason they call it the Grit & Grind Grizzlies. They do the dirty work on the defensive end and that usually translates to wins.

But they aren't without their questions. For starters, what will Jaren Jackson Jr turn into? Right now he's this modern stretch big, but he's certainly more "stretch" than "big".

You can mostly throw out his 11 games last year, but what we've seen from JJJ so far is a legit PF/C who can stretch the floor and knock down threes (career 37%), and protect the rim (1.5 career blocks) but where he lacks is in the rebounding department.  He's a career sub 5.0 rebounder. That's not great. We're also going to have to see him improve his post defense, ranking in just the 36th percentile in 2019-20. Opponents shot 54.5% against him in the post. He could also use some improvement in guarding the P&R, but these are all things you expect of a young player. Now healthy and more experienced, a jump from him defensively is what will go a long way in terms of the Grizzlies taking a leap.

Then there's the question about their offense. At times, scoring points is an issue. They ranked just 15th in points last year, 24th in 3PM and 20th in 3P%. They also don't get to the line a whole lot, finishing 17th on the year. In terms of where their offense ranked as a whole, you guessed it, 15th. That feels right. They were average to below average offensive yet elite defensively. That's how you end up contending for the play in. Their defense gives them a shot every night, but at some point they are going to have to figure out how to score. The encouraging sign is at 62.8% AST%, they move the ball. That number is good for 7th in the league. So you would think with JJJ back and healthy, Ja improving on the offensive end, and then the progression of guys like Desmond Bane from an outside shooting perspective, the pieces are there. We know Dillon Brooks can score, but he's not all that efficient. Efficiency is a big time issue with their high volume scorers. Any improvement in that area from Morant/Brooks can only help.

I see no reason why the Grizzlies can't continue to increase their win total considering they have the pieces, and those pieces are showing real signs of developing into legit talents. The only thing that could trip them up is simply that transition from being a "happy to be here" team to a team that has real expectations. That's exciting as a Grizzlies fan. You've pretty much crushed this entire rebuild, and this is your first real challenge. Now is the time to take your first leap.