I didn't blog this yesterday because I think all of us Giants fans needed a 24 hour lowlights blackout to get over the bullshit we watched on TV Sunday afternoon. But I think this clip is the straw that broke the camel's back for me with Nate Solder that luckily didn't lead to Von Miller breaking Daniel Jones' back. 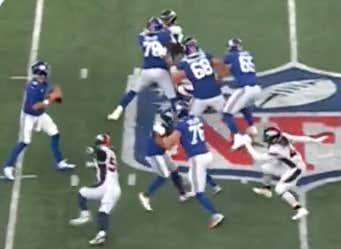 I've become numb to watching Nate Solder act like a turn style for pass rushers before they tee off on Giants QBs after becoming the highest paid offensive lineman in NFL history. But once you start blocking other Giants from trying to block their guys, you have to be benched for treason. That simple.

I get that Solder beat out Matt Peart for the job in training camp, which is a terrifying thought for a guy we were hoping would become the Giants right tackle of the future. However, there is noooooooo way that Peart is worse than a guy that allowed two Broncos to run free to the QB no matter how good his block was on the guy wearing the same color jersey, which ironally was Solder's highest graded block by my CFF metric. Peart could let his blocking assignment run right past him yet as long as he stands still and doesn't stop another Giant from doing their job, he is better than Solder. And I say that seemingly outrageous scenario because it quite literally happened during the same game.

Solder may only be on the roster because he opted out of last season and his cap hit this year is equal to what his dead money would've been if he was cut. But you can't start an offensive lineman on a team that has a hard enough time blocking opposition when one of their own isn't going full Benedict Arnold on a play. A man's got to have a code. Omar Little said that, so you know it's true.