After two years, HBO's prestige hit and argubably the best drama on TV finally returns to our screens on October 17th. The much-anticipated Season 3 drop of "Succesion" has been a long time coming thanks to the pandemic but will be well worth the wait.

When we last left the viper's nest that is the Roy family tree (SPOILER ALERT), Kendall had just chucked his domineering, megalomaniacal media titan father Logan under the bus in front of the world press in a stunning move. Rather than throw yet another shit-fit or a $200K vase across his $80M boat, the old man appears to crack the tiniest of smirks as he sees his second-born finally become a killer (in the metaphorical sense). End scene. Wait two years.

I just finished my re-watch and like the second time with every great show, you pick up shit you missed the first time and/or you're more attuned to what's going on so you're looking for different things. Like, as this great article notes, the early connection between Roman and Gerri before it gets...intimate isn't something you'd pick up on during an intial viewing. But you keep an eye out for it when you circle back to prep for the news season.

I know Greg(ory) and Tom are the fan favorite tandem and rightfully so.

But Connor might make me laugh even more with the shit he comes up with. Alan Ruck does phenomenal work as the clueless, quixotic, and emotionally-stunted first-born son (watch his face when he discovers that his 'fans' are calling themselves Con-heads). Though there may be a sad little boy at his core, Connor has some of the best lines/deliveries of the show. Like this one he gives unironically and with all sincerity while on E. 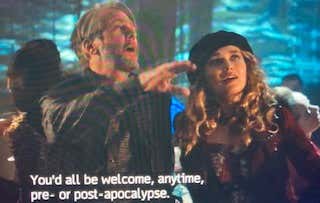 Sometimes a show can be even better the second or third time around, especially when it's as deep and rich as say "The Wire". You may have also missed a subtle-but-key line or scene (like the quick shot of the self-loathing Rawls in a gay bar). Shows this good demand your undivided attention. So put your fucking phone away and enjoy it. Another month to go…