You gotta respect Jeopardy stopping the bleeding of firings, cancellations, and all the other bad press linked to the show over the last few months by going back to the Trebek well one more time. I have illustrated this in #meme form for the Youngs reading this blog. 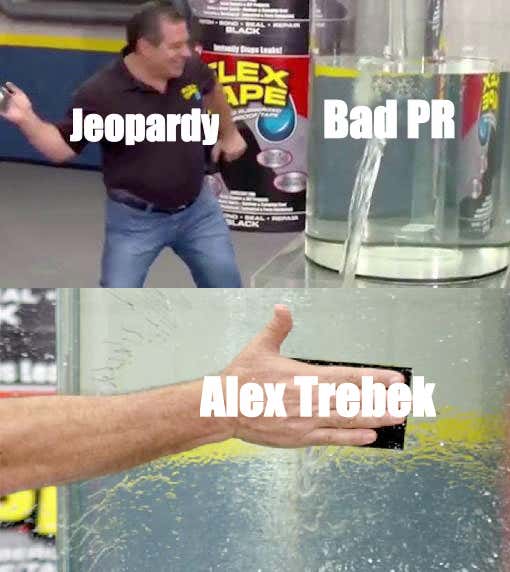 Honestly I can't even fault Jeopardy for doing this because Trebek is clearly the reason that show became the GOAT of gameshows. He was the perfect mix of class, entertainment, and relatability. People didn't tune into Jeopardy simply because they enjoyed some trivia and feeling smart whenever they got an answer right in the form of a question. It was because this guy fucking ruled and people loved inviting him in their house every weeknight.

You can even make a case that it's crazy Jeopardy didn't name the stage after Trebek back when he was alive since he was as synonymous with his show as anybody in the world. However considering what the Jeopardy decision makers have done recently, I guess it really shouldn't be a shock.

Anyway, every time I see a Jeopardy story I realize how much I miss that dude someone who never met him and can't even imagine how his family feels. As always, #FuckCancer.

P.S. Seeing Trebek's son reminded me of the time Alex roasted the living shit out of some hardo powerlifter by saying that his kid was stronger.

I'm not sure where the video of this went because I remember watching it live and my jaw hit the floor. But when if you are the fruit of the loins of a legend like Alex Trebek, there is no doubt in my mind you are stronger than any mortal man.