The above video is a highlight reel of yesterday's Bears vs. Rams game, a game in which the Bears lost by 20 points. We recorded our first live stream from the new office yesterday and as the clock struck zero, there was a feeling of apathy amongst the 8 of us in the room. Nobody was mad. In fact, Ed said it best...

...the Bears actually looked a little better than fans expect. We knew the defense was old an aging and that the Rams would put up points. That said, the OL looked not-terrible. Monty was an animal. Dalton didn't really fuck up. Sure he was just "there" but he's far from the reason the Bears lost by 20. Fields did...stuff. Got in the end zone at least.

But goddamn, if people are saying, "hey, it wasn't THAT bad!" about a 20 point loss, there's a big problem. The Bears schedule doesn't do them ANY good. It's a gauntlet: 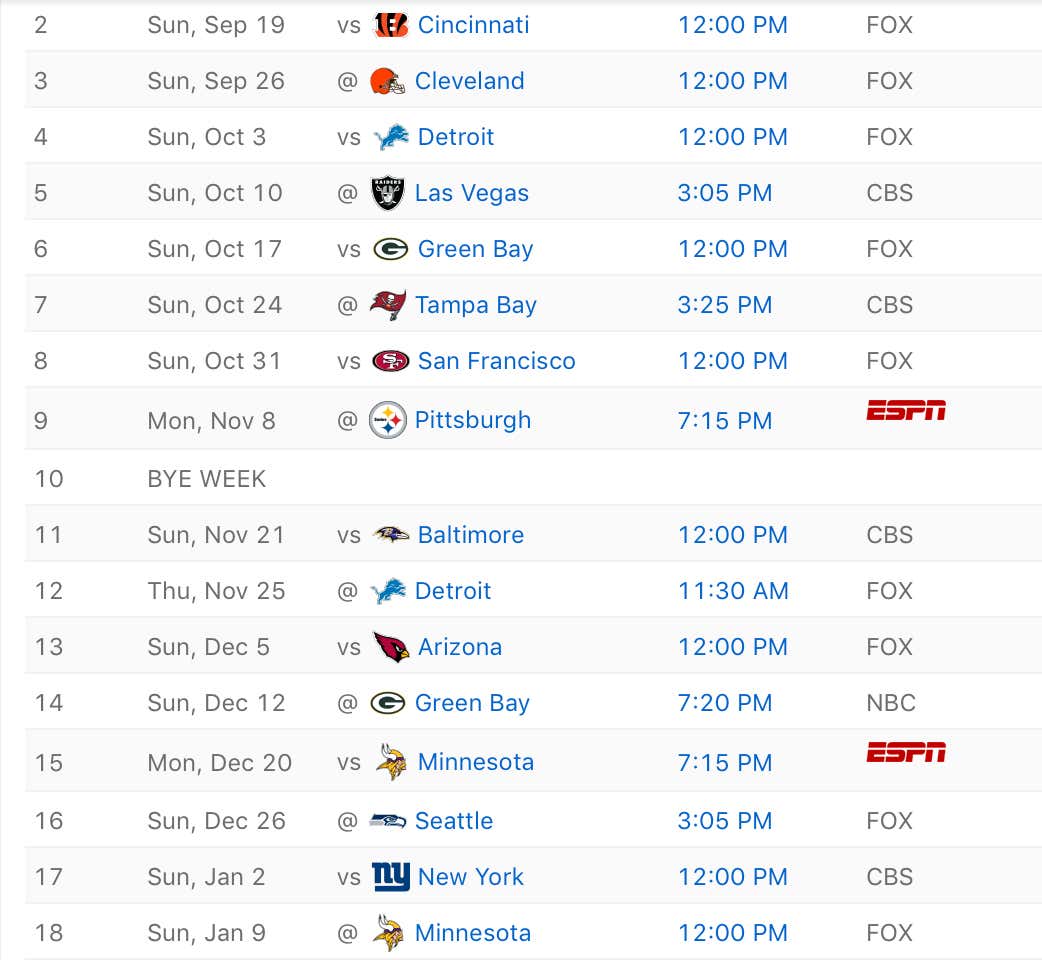 A gauntlet that only has the Bears favored 4x in the next 16 games as it sits right now. There's literally nothing to look forward to with this team other than the development of Justin Fields. Assuming they go like…. 4 and 13… then all we'll be doing is watching the Bears because that's what you do on Sundays. There's nothing else TO do, right?

NOPE!!! Here's your full breakdown on how to get through the cold months in Chicago as a Bears fan. We'll start with the obvious:

The Sox are fucking loaded, getting healthy, and have a 3rd best shot at winning it all, per Vegas:

Sure, they're tied with other teams at a current +700 value, but that doesn't fit my narrative, so we're calling them #3. Fuck off if you don't like it. Nevertheless, if they were hypothetically -120 to win it all or +700 like they actually are, they have a TON of really good young talent on the team. If you're not a baseball fan but want to check out see electricity in its purest form with respect to baseball, I recommend tuning into Sox games to watch Luis Robert hit baseballs and Michael Kopech throw them:

Stats aside, they're sheer talent makes them must watch. Ya know how Andy Dalton is the most vanilla, boring, mechanical, athlete ever? Not even saying that's a bad thing as he's had a great career, but Robert and Kopech are the opposite of that. They bring the Michael Vick "wow" factor to baseball. They'll both be counted on heavily while the White Sox make their post season run and since it's baseball, they play almost daily. Lots of opportunity to check them out in the next two months.

I am praying to god this team makes a deep run into October. If they don't, it's gonna be a LONG winter.

I just finished Peaky Blinders. Again. I'm on record as saying it should be considered an all time great TV show, right up there with Thrones, Sopranos, The Wire, etc. Maybe a rung below those all time greats, but considered to be on that pantheon for sure. It's incredible; Cillian Murphy dominates as an evil genius alpha male and if I've said this once, I've said it a million times: Tom Hardy's portrayal of Alphie Solomons is one of the greatest acting performances I've ever seen. Movie or TV, it doesn't matter, he is flat out incredible in this show.

If you're not into that, here is a list of all fall TV show premiers through the end of the year. I think I'm personally going to start Succession this fall (never seen it) and I'm super pumped for the next season of Better Call Saul. It's not Breaking Bad level good, but it's still been a nice little prequel to what I think is the greatest show of all time. That said, they should have done a prequel centered around Mike as a Philly beat cop that…. broke bad…. called "No Half Measures" based off one of the GREATEST scenes in TV or movie history:

Buy a Peloton and get fucking YOKED:

I own a Peloton, nbd. I use it like 3-4x a week too. It gives me an excuse to eat like absolute SHIT, drink a ton, and justify both of those things by doing a 30 minute Kendall ride the next morning knowing said ride is going to make me look fucking chiseled. It's fabulous. If anyone is looking to join the Buns of Anarchy biker gang, let me know. I can get you $100 off with my personal promo code. Shoot me a DM. It beats the FUCK out of the gym. You don't have to leave your living room or lift weights. Why would anyone ever want to lift weights? They're heavy. Lifting heavy shit is the WORST.

I adopted the most handsome, well behaved puppy on earth on December 1st of last year. He's perfect and he quickly became my best friend. I got him from Chicago Canine Rescue up on the NW Side of the city off Elston. I knew last winter was going to be BRUTAL with the pandemic and since I live alone, I wanted to get a buddy to be bored with. That's where Ace checked in. All jokes aside, he's made me exponentially happier and I couldn't imagine not having him, especially during the grueling winter months. If you're looking to get a dog, make sure you adopt. Not an ad, just go do it. Save a dog's life. A dog will get you through another playoff-less Bears season that much easier.

We'll be commiserating every Bears loss this year on Red Line Radio, which is now adding a TUESDAY show on top of our normal Thursday drop. Tuesdays will be Bears heavy and Thursdays will be White Sox/Hawks/Bulls heavy as the playoffs approach and the Hawks and Bulls start their seasons as improved teams (on paper).