Put it in the motherfucking books! What a game, what a night, what a goddamn show put on by two teams trying to stay alive in the playoff race as their fans screamed their faces off the entire time. I am obviously thrilled that the Mets won but even if they had lost, I still would've loved tonight's game because of how fun it was outside of The Francisco Lindor Game wiping out the last of the Lindorks off the map (or they can leave their orange and blue clothes at Citi Field then cross the Tri Boro to root for the other New York team).

Lindor was the star of the night not only for his three bombs but for being a centerpiece of the story of the night.

I had no idea what the fuck was going on but luckily one of the people at ESPN that actually adds stuff to the broadcast chimed in and explained the story behind the whistle.

Nothing like a little on field drama to spice things up in a never-ending baseball game! Baseball has forever been a sport where you solved your problems either trying to take a guys leg off at 2nd or throwing a hardball at him 100 MPH. But I kinda like people talking their shit to their opponents face whether it's bat flips, pitchers screaming, or telling someone on the other team you didn't like something they did.

Speaking of not liking something someone did, Luis Rojas or whatever Ivy League nerd is in charged of such decisions figured it would be a smart idea to have Brad Hand pitch to Giancarlo Stanton instead of walking him and facing Joey Gallo (who Hand got out). Whoever did make that decision chose poorly.

What followed is what every lunatic who kept watching this marathon game despite their eyes bleeding after a full NFL slate deserved. The benches clearing in an electric baseball game.

No punches were thrown or anything since this is still baseball we are talking about. Javy Baez seemed to call out Stanton, but from what I could tell Stanton went into the dugout then hid under the seat hoping nobody could see him. Stanton may have the height, weight, and muscle mass advantage on Javy Baez, but his games played the last few seasons tells me his body may not be able to handle combat sports considering it's not very good holding up in a sport where you swing a stick 4 times a game and occasionally play in the field. 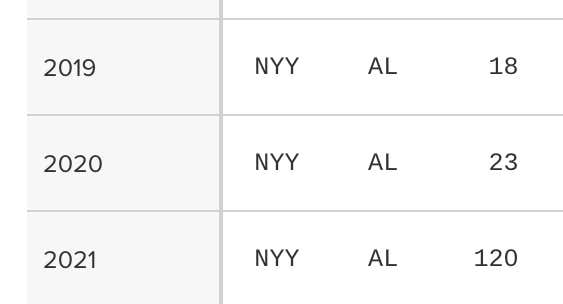 Takes one to know one I guess?

What a different a night makes!

Anyway, after Lindor's 3rd home run and the typical late inning drama that comes with Edwin Diaz, the game was put in the books as Lindor fittingly caught the last out of the game off of Stanton's bat and thousands of New Yorkers who stood as one yesterday yelled absolutely vile shit to each other as they left Citi Field.

Flex on'em King! (I'm not too old to call someone King, right? You know what? Don't answer that).

As for the whistling accusations, Francisco Lindor made his peace in a way that only a great one could.

While Giancarlo Stanton said the phantom whistler was a reliever sitting in the Yankees dugout during the 2nd inning of a game.

Long story short, who cares? The last time a bunch of New Yorkers cried about a sign stealing scandal in baseball, the Mets ended up firing their manager for shit they didn't even get a ring for (JK, that was totallyyyyyyy different).

Yes, I know my gifs in this blog are extremely dated however they are oldies but goodies and it is roughly 4 hours past my bedtime

If this is what the Subway Series is like in Year 1 of Steve Cohen, I can't wait to see what it's like when we have two actual big market teams sharing the city and competing for fans, free agents, and headlines because shit like what's going on in this gif is INCREDIBLE for a baseball town like New York.

Listen to that roar…

LFGM. Now let's keep scoring runs now that the Yankees are gone and maybe keep playoff hopes alive into that last weekend. A fresh We Gotta Believe coming tomorrow discussing this series and more. Subscribe on your favorite podcast service to get it as soon as it drops.

P.S. The Mr. Koo's Wild Ride Game may actually be the wildest moment in Subway Series history. That dude had nooooo interest in digging in against the Big Unit yet somehow scored a run.