THE CLEVELAND BROWNS ARE BACK!

You know what this game is, folks? HOUSE FUCKING MONEY.

The Browns are playing the best team in AFC, in their packed home stadium, as six-point underdogs, following the team's stunning blowout loss in the Super Bowl. This is the Chiefs' game to lose, and that is no slight against the Browns. They're a good team, and I say that without any slight hesitation. The Browns are going to be good this year, but will they be good enough to win something meaningful? That's the big question!

In the last two seasons that the Browns finished with winning records (2007 & 2020), they lost their Week 1 games by a combined score of 72-13. Meaning, Week 1 hasn't mattered much for the Browns, especially this season with a whole extra game. Whatever happens today, happens. I am just fucking excited to see this team clicking on all cylinders!

This is the easiest throwback of them all.

The last time the Browns opened their season with the Chiefs was the 2002-2003 season (previously the last year they had made the Playoffs). It resulted in a Browns loss, in one of the most absurd fashions in football history…

I think the Browns getting 5.5/6 points here is pretty steep. To quote Dave and Big Cat on this week's advisors, that's a lot of points. The Browns are really good, and they can score points. So, first off, give me the Browns +5.5, they're going to keep this close. Also, I think even with the Browns' improved defense, Patrick Mahomes is also going to have a nice day. He has never thrown an interception in the month of September in the NFL. The over is an easy pick for me.

(Worth noting, I was a totals champ last year… against the spread, not as much)

It seems as though all of the above guys listed as questionable will actually play. Though, Odell Beckham Jr.'s status is interesting…

Throughout the weekend, I've seen some say he won't play, others say he will only play some of the game, and then you have other reports saying he is good to go. This will be the big injury question of the day for the Browns, clearly, as OBJ works his way back from his injury from last season.

Technically, Tyrann Mathieu isn't listed, but he has dealt with COVID-19-related issues. It sounds as though he will play, but who knows how impacted he will be conditioning-wise.

Basically, this seems to be a relatively healthy game for both teams. 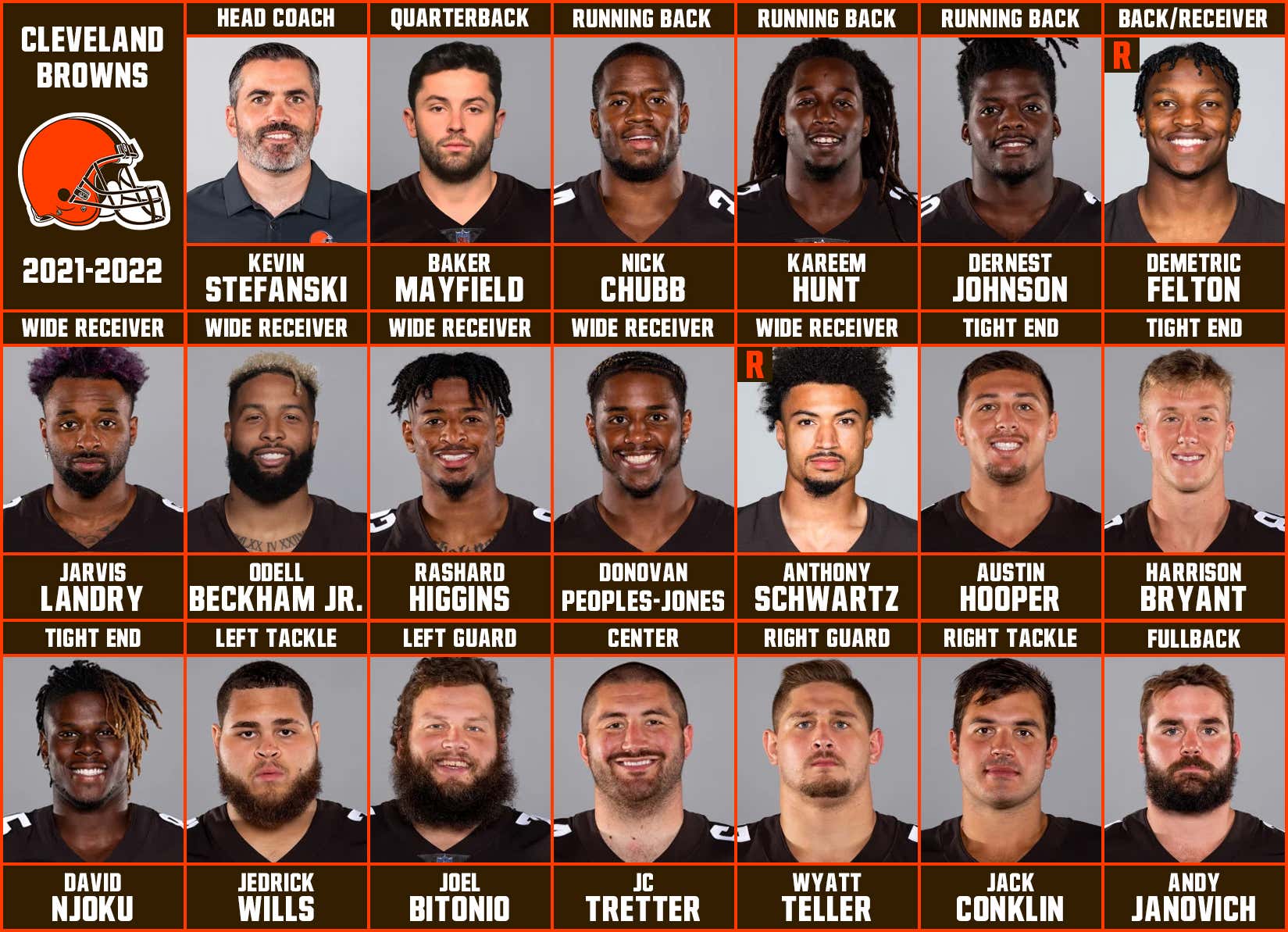 Yeah, I'm pretty fucking excited about this offense. They come into the season healthy, fresh, and, most of all… ALL STARTERS ARE RETURNING. That's a good thing for a Browns team that, despite late-season COVID-19 issues, was fantastic on offense for the final half of the season.

It all starts with Baker Mayfield, though. Many people finally realize the guy is good, but there are still some doubters. Need I remind you how he finished his 2021 campaign: complete 64% of his passes for 2,468 yards, 16 touchdowns, and only 2 interceptions. Pretty fucking good, if you ask me.

How about that two-headed monster at running back?

Worth a reminder that Nick Chubb missed a large chunk of last season with an injury, as well. Nick Chubb averaged over five yards per rush against a shaky Chiefs' rush defense in the playoffs, but due to the team playing from behind, he didn't get a ton of touches. The Browns will be in great shape tomorrow if they can establish their style, maybe grab an early lead, and pound the football. That's where it opens up Baker to cook in the passing game off of play-action.

Just like in the Divisional Round, and almost every game, the rushing attack is big for the Browns (which is nice when you bring back the NFL's best offensive line.

Instead of focusing on returning receivers and tight ends, how about two of the new weapons?

Kevin Stefanski adding a weapon such as Felton to this offense is going to be scary. Baker has also mentioned a couples times during training camp that they expect Felton to be a large part of the offense. With Chubb & Hunt already, adding a speedy RB-WR hybrid to the mix is exciting.

The Browns haven't had a true "take the top off" guy in a while. You could call Odell Beckhham Jr. that, but we know the issues and injuries that have happened in his tenure. What Schwartz brings is also completely different, it's true track and field speed. I don't expect a ton from him off the bat, as he was out for much of training camp, but my word this speed in the style of offense the Browns employ could be deadly.

If you aren't amped for this Browns offense in 2021-2022, then you're probably a Ravens, Steelers, or Bengals fan.

Hey, look, this defense may not suck ass this season! 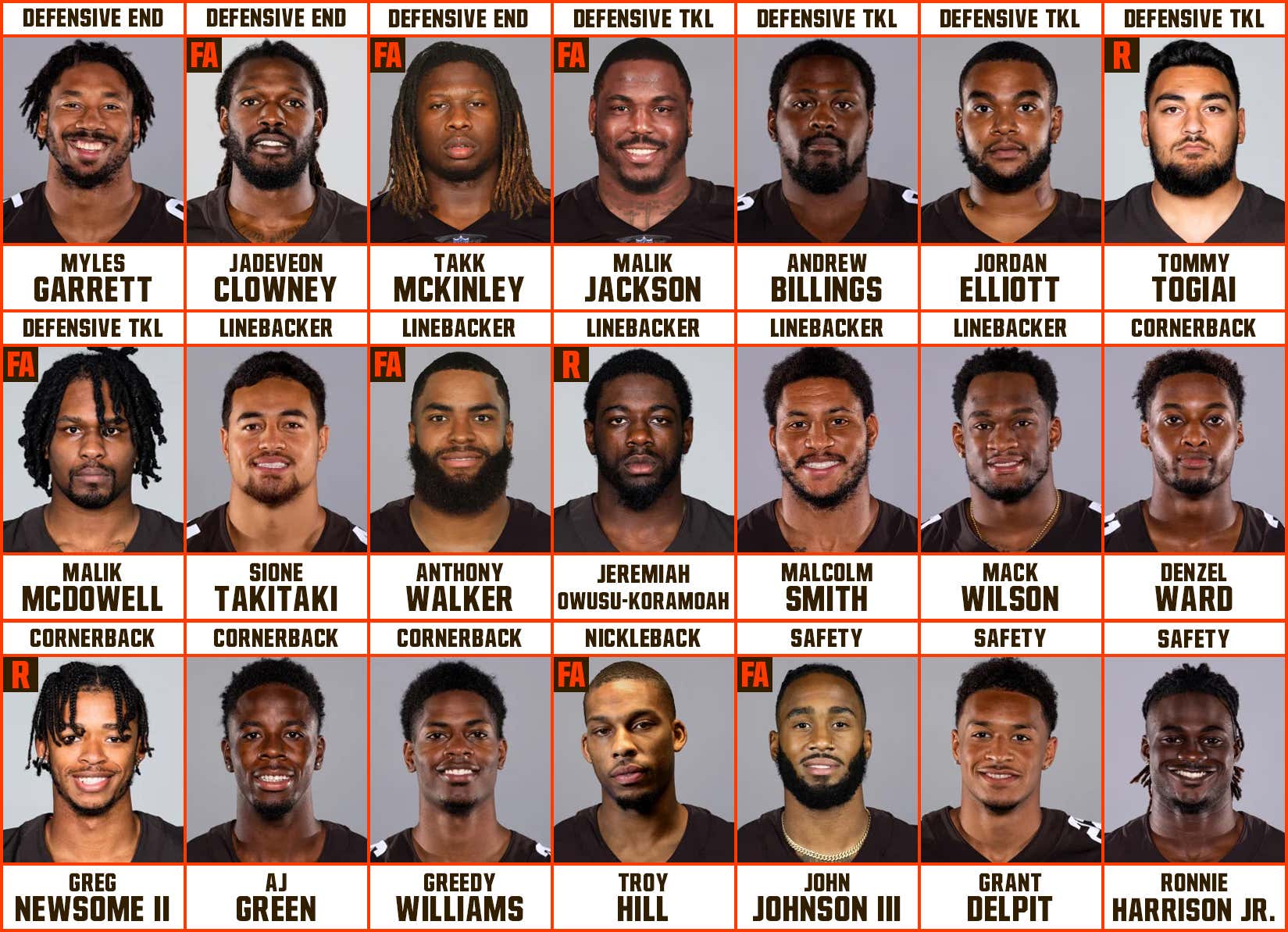 Okay, they weren't that bad, but they certainly weren't very good.

The Browns know that a good defense last season would've likely seen them playing for the AFC Championship, and maybe even hoisting a division title. So, Andrew Berry, arguably one of the league's best general managers and outright fucking genius, revamped the defense.

Could I spend time talking about the incredible value signings the Browns Moneyball front office made? Yes.

I want to talk about one man. The Browns version of Troy Polamalu: Jeremiah Owusu-Koramoah, aka JOK

I am already obsessed with JOK.

His versatility is fucking incredible. He is going to start for the Browns in nickel packages, and you should expect to see him everywhere this season. How the Browns got this guy in the second round is fucking insanity.

If the Browns want to win something meaningful this season, the defense has to be better. The tools are there, but how long will it take everything to mesh together? I say it takes a few weeks, which is fine, but the unit does have potential to be special, especially when you boast one Myles Garrett.

Can the Browns win a game with Jim Nantz on the call?

The Browns last won a game with Jim Nantz on the call was on Thursday Night Football in Week 10 as the Browns beat the piss out of Cincinnati to move to 6-3 on the season. They would go on to lost six of their last seven games.

Succession is back soon, and it continues to have an elite television theme…

I don't think the Browns win today. They can win today. But today isn't the goal. Just the beginning.