We are back in the basement for another week recapping Marvel's What If, this time a zombie episode right out of 2014 when every other person on the internet was talking about zombie apocalypse bunkers.

Once Bob Fox and I wrapped up that cartoon from a Tim Burton wet dream, KFC joined us at the 23:45 mark to do some non-Marvel talk with our weekly sports, pop culture, and Barstool What Ifs including What If the Red Sox never traded sold Babe Ruth, what if Big Cat got the Back To The Future II sports almanac, and of course what if Weird Haircut Seth was able to throw a football 60 yards?

As is the case with many of these what ifs, a simple change in the flutter of events can change an entire reality and the noodle arm of that man with an off-putting haircut completely alters what Barstool Sports becomes. David Scott Portnoy has been able to spinzone his way out of a fair share of L's in his life using his silver tongue, mousetrap brain, and/or handy neck brace. 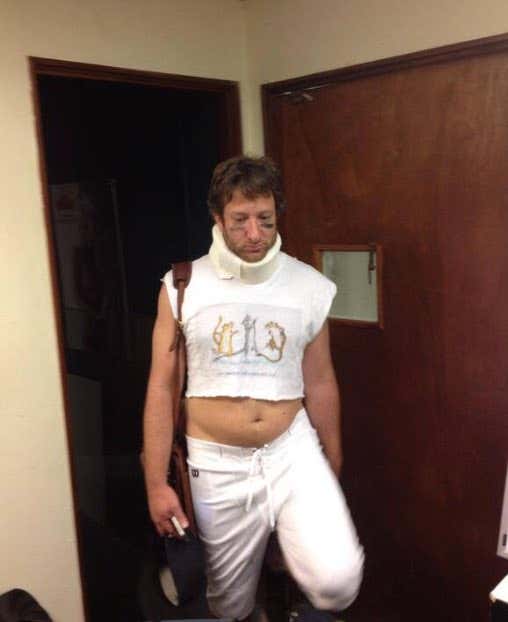 HOWEVAH, if Weird Haircut Seth had a howitzer for a right arm and actually tossed that football 60+ yards, along with doing it with a regulation NFL sized football since you know that would've been a point of contention, there is no way Portnoy would've been able to overcome that defeat. He would've tried his hardest, but as a rapper once testified, numbers never lie and the impact of that pigskin flying 60 yards would've been vast both inside and outside the Barstool world.

First of all, Weird Haircut Seth's confidence after that throw would've skyrocketed because he conquered his personal boogeyman and wasn't called a bum an unbelievable amount of times in a row (Seriously, I forgot how hard Dave hit him with the B word). KFC, Big Cat, and the non Go Pres Go Stoolies would've smelt blood in the water and gotten the #WeirdHaircutSethWasRight hashtag trending. With this newfound confidence, the campaign manager now known simply as Seth gets enough signatures for Portnoy's mayoral campaign and Dave becomes mayor as the power of Barstool is seen by the rest of the country years before Peter Chernin unlocked its potential with a shit ton of money.

What is good for Dave's mayoral campaign however is not good for Barstool. Despite Barstool always being Portnoy's baby and his political strategy of leaning on his cabinet to do all the heavy lifting, things change when the boss is sitting at the mayor's desk instead of at a desk in the attic of an old dentist office in Milton. Dave still focuses on the company, but the Final Four video with Burger King doesn't happen.

No #ChickenFries video means no Jared Lorenzen video on Barstool which means no video of himself to show the Chernin people what Barstool is all about which means no big swinging dick at the cracker factory pumping cash into Barstool which means no HQ2, HQ3, or Penn deal. If Weird Haircut Seth had a rocket arm, Barstool may not be a rocket ship heading to the moon, which would be a tragedy for all of us that collect paychecks here as well as the zillions of new Stoolies and fans of little shows like Pardon My Take, Spittin' Chiclets, Fore Play, or Call Her Daddy.

Despite all that, the biggest tragedy of all may have been this classic reaction never happening.

Robbie, KFC, and I go much more in depth on that What If and a whole lot more, so watch the podcast above or listen/subscribe on your favorite podcasting site by clicking here then end things off by listening to this absolute banger from back in the day.