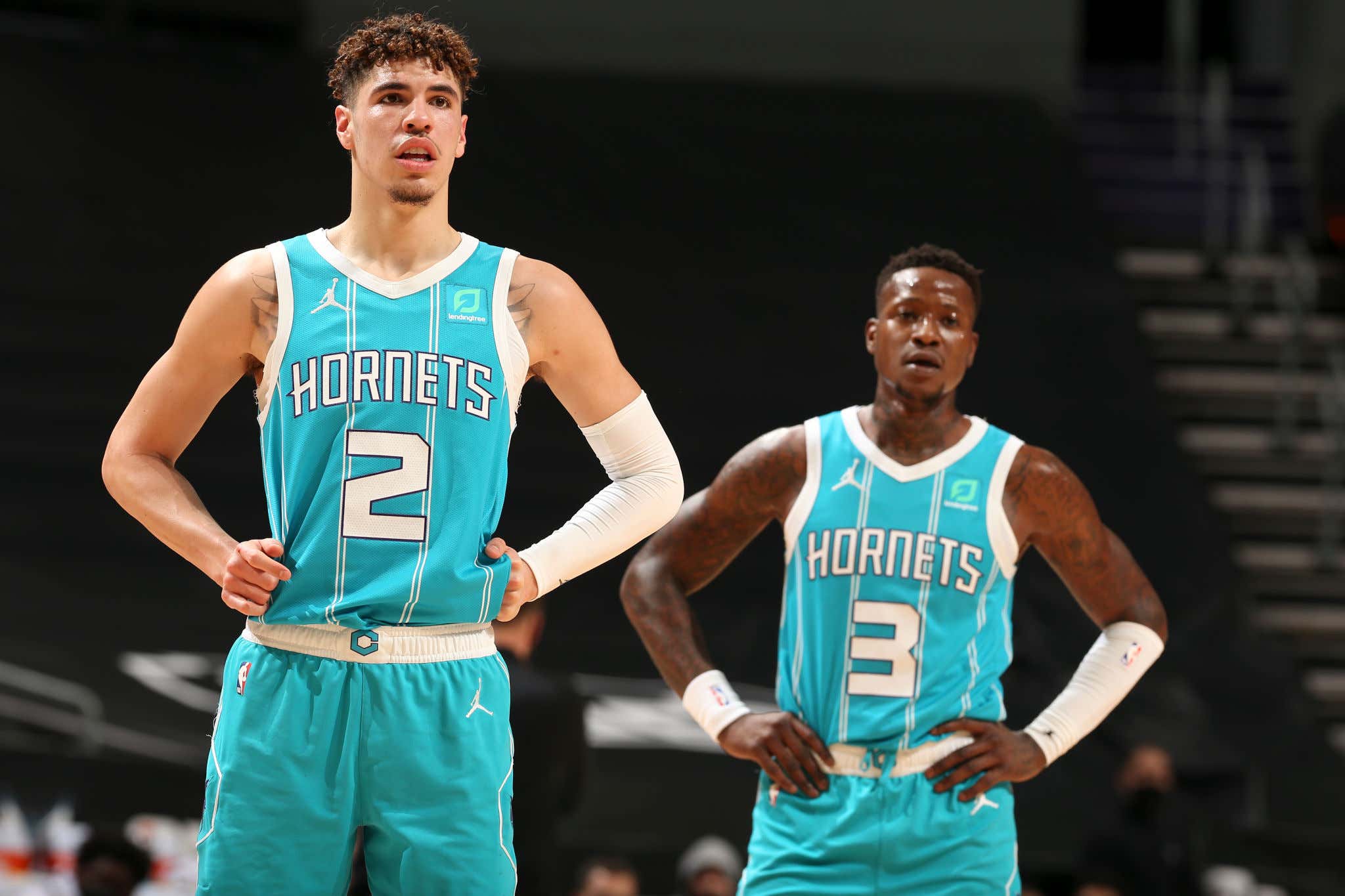 Last season, the Hornets were one of the surprise teams in the league. Not only were they extremely fun to watch on League Pass, but they actually turned out to be much better than most people thought heading into the year. After winning just 23 games in 2019-20, we saw the Hornets bump that up 10 wins last season, all while dealing with injuries to some main guys. They managed to get into the play in tournament before getting absolutely stomped by the Pacers, but overall it was definitely a step in the right direction. There were plenty of signs when this team was healthy that showed us there's no reason to think the Hornets can't once again be in the playoff hunt in 2021-22. Their expectations change and it's certainly an unknown how they now handle that, but there is real talent on this roster. A good mix of young guys and vets, at the very least this is still going to be a very fun team to watch on a nightly basis. Look, there are already signs of what's to come

As always, let's first take a look at how their summer went and what their roster currently looks like 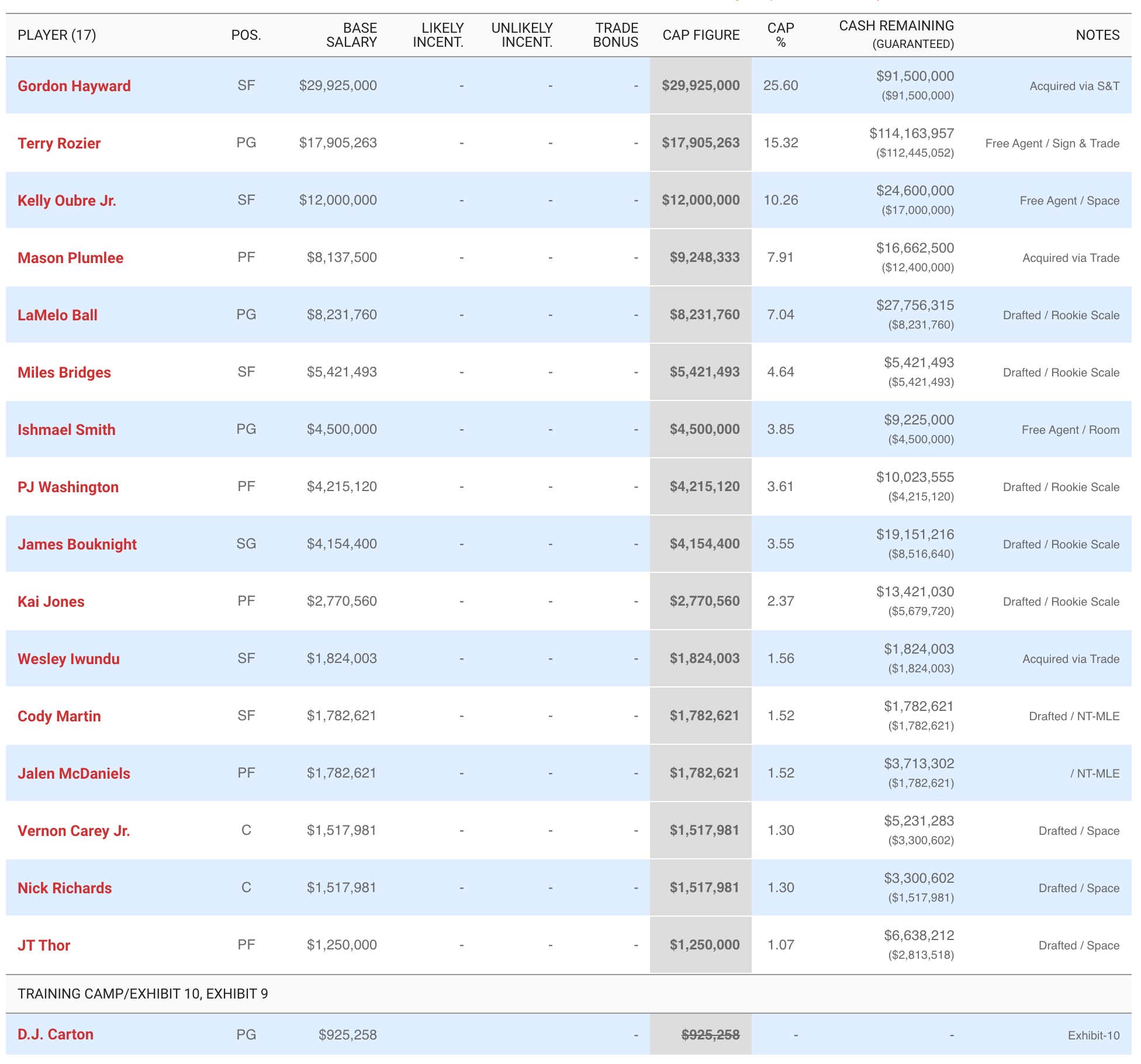 All in all, this is only the 27th most expensive roster in the NBA at just $108,047,136. It's likely not going to stay that way as a lot of their young promising players enter their second contracts, but for the money they sure are getting some good value in terms of team success. I'll remind you, that from the start of the season to when Hayward went out for good on 4/2, the Hornets were a 4 seed at 25-23. At that time LaMelo had already been hurt for a few weeks, so that month of April where the Hornets were without both Hayward/LaMelo is basically what did them in. They went 6-10 that month and with things in the East it's no surprise they slid. Is that really a fault of their own though? This team was as competitive as any middle of the pack team in the East when they had their guys.

In terms of where to start, it makes sense to begin with one of the biggest X factors on this roster. LaMelo Ball.

The ROY, LaMelo came into the league and thrived pretty much right away. Once he became a starter, things got even better. He started 31 of his 51 appearances, and put up a very solid 18.1/5.9/6.2 in that new role. Not only that, but he became more efficient. Who wouldn't take 43.8/37.9% as a 19 year old starting point guard? I know personally I knew LaMelo could pass, but it was his well rounded offensive game that surprised me last season. It'll be interesting to see how he responds to teams gameplanning for him in Year 2. He's not sneaking up on anyone. Defensively he obviously needs to improve, but he's a kid. That should come with time. The bigger takeaway is that LaMelo was very clearly a draft hit and can be the franchise point guard moving forward. We saw enough from him last year to know they got a good one there.

Then there's Gordon Hayward. Look, if anyone knows the frustration of having Gordon Hayward on your team, it's yours truly. When Hayward was healthy last year, he was Utah Hayward. He was the player that Celtics fans dreamed of but never really got.

But then he got hurt. It was a weird play where he landed awkwardly against the Pacers, and that was it. It sucks, but that's now the reality for Hayward ever since he left UTA. When he plays, he can be really effective, but we're at the point where you just cannot rely on him to make it all the way through the year. Ultimately, how much he's able to play sort of dictates the Hornet's ceiling. If he plays something like 72 games like he did in 2018-19, this team could absolutely avoid the play in.

With someone like Terry Rozier, you have a player who just got another massive payday but also someone who has really improved over these last few years. Terry was actually one of the best clutch time players in the entire league. His outside shooting is a legit weapon, something that plagued him early in his career. Since his age 23 season (Year 3), in 291 games he's a 38.4% three point shooter on 1,733 3PA. That's a legit sample to the point where you can buy into his outside shooting numbers. Terry easily had the best season of his career last year and honestly has been exactly as advertised since he first arrived in CHA. There are games where he's going to be unstoppable, but also games where his shooting sort of kills you. The 7-20 (0-9) performance in the play in game comes to mind. But while he may never make an All Star game given the guard talent in the East, he can put up All Star caliber production on any given night.

To tell the whole story of the Hornets though, it's not all great. For starters they were flat out not good offensively, ranking just 23rd in the league. On the defensive side they were better, but still not that great at 16th. They had a -1.9 point differential which was 23rd. So the question becomes, who are they? Are they they team that was winning games and competing for a top 4 seed through the first 50 games, or are they a team that was maybe punching above their weight because the metrics don't match the record? Looking at that roster, there are still glaring holes. What's the deal at center? Kai Jones has potential, but he's a rookie. What has Vernon Carey Jr shown you that gives you a ton of confidence? Do you feel great having to rely on a Plumlee? He'll be good in terms of a passing big man, but they basically just traded a Zeller for a Plumlee. That's not exactly getting you over the hump. The Hornets are built to play small and play fast, so I'd like to see them play at a quicker pace than what we saw last year. There's no reason this team shouldn't kill you in transition, yet they ranked in just the 64th percentile in transition offense.

You expect guys like Miles Bridges and PJ Washington to take another leap, and in theory Kelly Oubre should help offensively even though he had a weird year in GS. There's the unknown of Bouknight who should be able to help fill the void left by Devonte Graham, but he's a rookie. Who knows how ready he'll be. So you can see, when it comes to the Hornets they look intriguing on paper given their talent, but overall you're left with this reaction when trying to figure out who they actually are

If everything works out, I can absolutely see this team being in that 5-7 seed range. But we're going to have to see real improvement on both ends and of course they'll need their main guys healthy. What we do know is they're going to be fun as hell to watch, so at least that's something.