Eloise, a young woman with a passion for fashion design and a strange sixth sense, mysteriously finds herself transported back in time to 1966 London in the body of her idol, a singer named Sandie. While in Sandie's body, she enters into a romantic relationship; but then, she begins to realize that the glamour of the 1960s London is not what it appears to be and the past and present seem to fall apart with shady and horrifying consequences 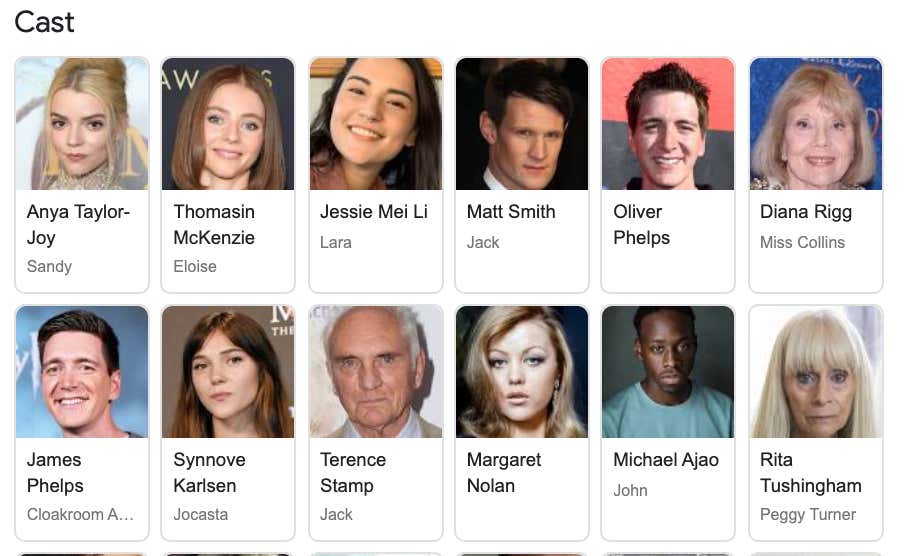 This movie has been brewing in my "most anticipated" tank for a while and I'll tell you why. Anya Taylor-Joy and Thomasin McKenzie are 2 of the best and brightest upcoming stars in Hollywood. If I could find odds on it, I'd have them as 1A and 1B to be awarded a best actress Oscar within the next 10 years. You're probably more familiar with Taylor-Joy, since she has been in more mainstream stuff like Queens Gambit. She also killed it in intense dramas like 'Throughbreds'. I was first introduced to McKenzie through the movie 'Leave no trace' which is INSANELY good thanks in part to her talents. She also was basically the co-lead in 'Jojo Rabbit'. The rest of the cast is interesting as well, although seeing the Weasly twins in a non-harry potter movie is weird. But the emphasis remains on those two leads.

The second huge reason is that this is an Edgar Wright joint. I absolutely love the Cornetto trilogy, specifically 'Shaun of the Dead' and 'Hot Fuzz'. He also made the underrated 'Scott Pilgrim Vs the World' and 'Baby Driver'.  He is an extremely talented writer that is also arguably the best director when it comes to picking out and incorporating music into his movies. So when you combine these two elements along with this concept, which is pretty damn interesting on it's own, I think we are looking at a top-15 movie on the year. Pyschological horror maybe won't resonate with everyone, but I am very confident that this movie is going to be ranked among the best of the year.