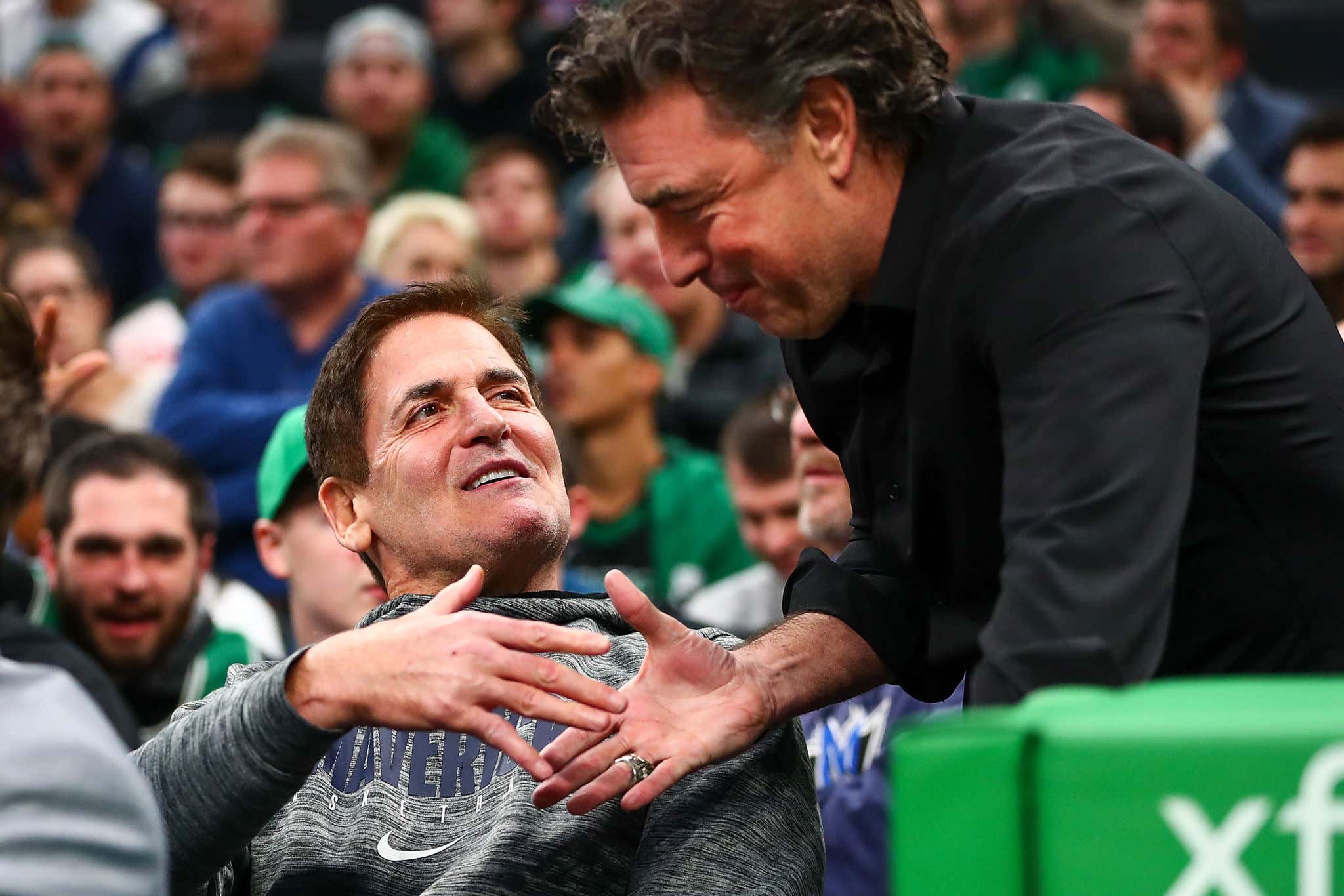 (For those who may not know, that's the Celts owner Wyc Grousbeck shaking Cuban's hand)

So in the SI story I blogged earlier today, there was a nugget in there about how Pierce tried to make his way to the Mavs prior to the Big 3 trade with the Wolves/Sonics. Like I said in that blog, who could blame him. Shit was rough at that point in time and naturally Pierce probably wondered if he would ever win in Boston. Those Mavs had just won 67 games in the 2006-07 season. Remember them? They lost to the 8 seed We Believe Warriors. What a series that was.

What a tweet. Let me just say this. I am forever in debt to whoever that mystery 3rd team was. My life changes forever if they don't pull out of that trade. I'm fairly confident the Celts still don't have a title in my lifetime if that trade happens. There's no KG. They probably don't trade for Ray. Maybe Dirk wins a ring before that 2011 run. So much of NBA history changes if that trade goes through. Thankfully someone didn't want Danny Ainge to get a first round pick. I need to know who that team was and who what pick ultimately turned into. Imagine the scene of that trade call? Everyone thinks you have a deal and then the 3rd team learns where the pick is going so they bail at the last second? That's insane. Wyc was ready to trade one of the greatest Celtics of all time. Who were they getting back? Maybe a young Josh Howard? Jason Terry before he was washed (I'm still bitter about his Celts tenure)?

If I had to speculate, I bet it was the Heat. Pat Riley fucking hates Danny Ainge and is absolutely petty enough to ruin and entire trade just so he doesn't get a pick. Remember this was prior to the KG trade so it's not like the rest of the league hated Ainge like they did immediately after he pulled that trade off. But him and Riley always went back and forth. Maybe the Lakers? I could understand them not wanted to do anything to help the Celtics, but why would they be involved in a trade that made the Mavs better? That doesn't add up.

If you want to get really crazy, that 3rd team is now the reason the Celtics have Jaylen Brown and Jayson Tatum. By not trading for Pierce, it allowed Ainge to later trade Pierce/KG/Terry to the Nets for that incredible haul. So not only did them backing out bring us a title, it also brought us our future. All over a first round pick that probably wasn't even that good. You want to talk about "what ifs" throughout NBA history, that's a pretty damn good one.

So thank you mystery 3rd team, whoever you are. Your pettiness is basically the best thing to ever happen to my life. I would have loved to hear Cuban on the other end of that call, I bet he lost his shit. Remember at that time he was doing everything he could to make the Mavs contenders. We just needed something to get over the hump after losing in the Finals the year before. They never made it past the 2nd round before that 2011 run, but at least they ultimately got there. Seems like it worked out for everyone outside of that 3rd team depending on who it was. If that group never won a title or anything like that? I wonder if they regret pulling out.