Derek Jeter is officially inducted into Cooperstown today. Good for him. He belongs there. Ya know why he belongs there? Because since the inception of the Baseball Hall of Fame back in the 1930s, there were a handful of precedents set:

I didn't make those rules, but over the course of baseball's history, if a player accomplished any of the above feats, that player was 100% getting in, save for players that were assumed to be on PEDs.

Derek Jeter has 3,465 career hits. Because of the previously established rule that says 3,000+ hits guarantees a player a plaque in Cooperstown, Derek Jeter was correctly elected the first time he appeared on the ballot. "Stare decisis". The precedent had already been set and followed religiously, and Jeter should be protected by that precedent.

That said, rules were meant to be broken, especially by me:

But don't let the thinly veiled jump throws, thousands of hits, or the team he played for fool you. Today while you watch ESPN, MLB Net, and whatever other stations there are, they'll put Derek Jeter on this pedestal while they suck him off to completion. Don't fall for their shit. Let me paint a *factual* picture of the player Derek Jeter actually was so he doesn't get away with every phony network on the planet sucking him off to completion.

The rest of this blog will be strike a cord and trigger many who read this. I'm sorry facts can be offensive. If you're offended by the rest of the blog, direct your anger at someone that isn't me. Go hit a punching bag or something.  I'm just the messenger delivering truth.

Derek Jeter has 5 gold gloves. That's awesome. What wasn't awesome was Jeter's actual ability to field baseballs. Jeter's career was winding down by the time advanced analytics became more and more prevalent in the game, but let's list a few of numbers that prove how bad of a defensive SS Jeter actually was.

I could go on and on and on with more support of my objective statement. I'm sorry if these statistics offend you. But the fact of the matter is that Derek Jeter should not have been playing SS (after he turned 30 especially) and was a detriment to the team defensively for the vast majority of his career. Gold Gloves or not.

I already know how you grease bag Yankees fans will immediately combat me: "But WSD, he got a World Series MVP and that's even better!!! He did it when it counted most!!! He should be judged by that and NOT his lack of regular season MVPs!!!"

Here's a list of World Series MVP's from prior years: 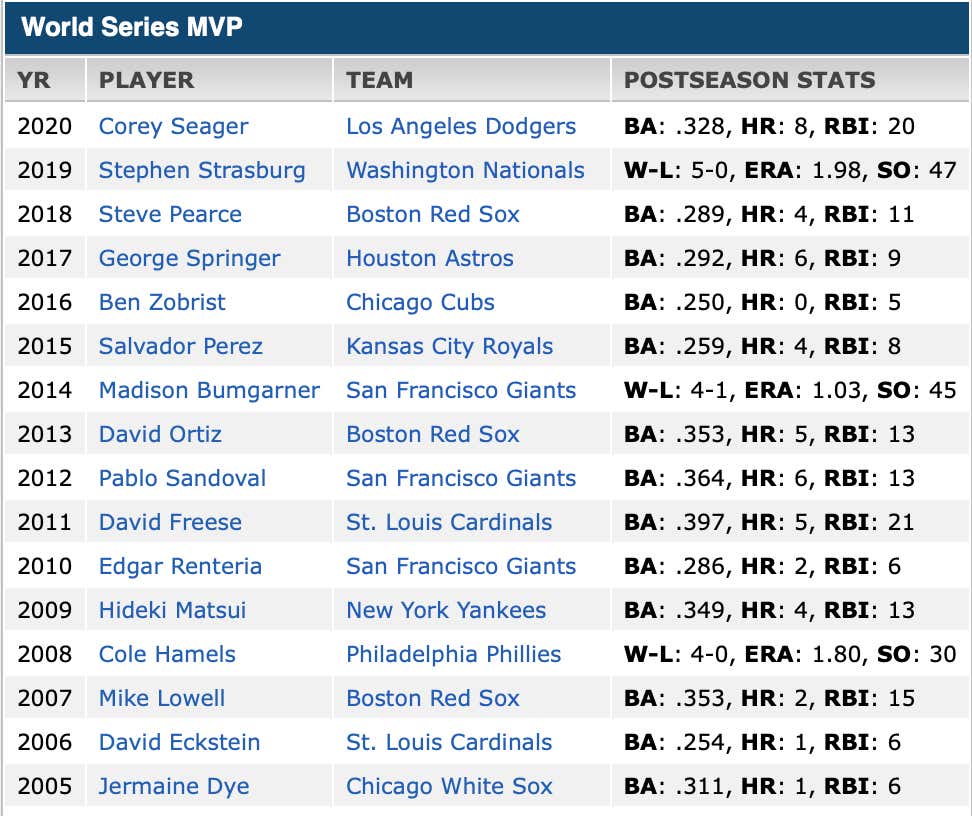 Like 90% of this list is nobodies. Steve Pearce? Sandoval? Eckstein? Fuck outta my face. I'll take the 162 game sample over the 7 game sample.

I will say this: I do NOT think Justin Morneau should have won it. But after glancing at it, it should have been either Grady Sizemore, but Hafner, Mauer and even Guillen had arguments.

Gun to head I personally would have voted Hafner for MVP this year, but it's tough to win as a DH. Even though Hafner's offensive numbers were THAT good in 2006, the award should have probably been given to the guy who plays ++ defense on top of being a fantastic offensive presence at the top of the lineup. Not the guy who could typically only field baseballs hit directly to him. Here's a list of qualified SSs from 2006:

Not only did Sizemore play an incredible OF at a premier up the middle position like CF, he was every bit as good as Jeter was offensively and had WAY more damage hits. Was Jeter great in 2006? Offensively, sure. It was aided by some luck with his BABIP, but definitely worth of MVP talks. He just didn't have a layup MVP season like Yankees fans lead you to believe. Sizemore should have won it.

He just wasn't carried by a super lucky .391 BABIP like Jeter was.

Jeremy Giambi Was Safe At Home:

Just kidding. I knew that'd get you riled up. He was out…. probably. I don't care though. Giambi should have been called out sheerly out of principal for not sliding like an asshole regardless of if he actually was safe or not. Fuck Jeremy Giambi.

Derek Jeter was a slap hitter:

"BUT WSD HE WAS A LEADOFF HITTER!!! BEING A SLAP HITTER WAS FINE FOR LEAD OFF HITTERS DURING HIS TIME!!!!"

Sure. But they typically also played awesome defense. Jeter? He didn't. I have proven that with stats already. But SS was the ONLY position Jeter could play. His offensive profile didn't fit any other position. He was a singles hitter. That's fine, hitting for high average and accumulating a mass amounts of hits is actually very important in spite of what the math nerds will say, but if being a singles hitter is your offensive profile, you better play at LEAST an average SS. Jeter did not. He was a bottom rung defender. So he can't play 3B or 1B because they want power there. Can't play LF or RF because teams want power there. Jeter has limited power. Can't play CF because teams want speed, lateral quickness, and range there. Jeter is limited athletically. That leaves 2B.

And that's where Jeter should have played, ESPECIALLY when A-Rod arrived in The Bronx. His offensive profile would have been perfect for it and his lack of defensive ability wouldn't have matter too much. Jeter had too much of an ego though. And don't get me started about how he didn't attend Bob Sheppard's funeral.

Offensively, he was basically Craig Biggio.

Good for him. That has nothing to do with individual success. Juan Uribe has more rings than Ken Griffey Jr., Ted Williams, Barry Bonds, Harmon Killebrew and Mike Trout combined and you don't hear me showing off about how he's some all time great. It's not tennis, golf or fucking basketball. Shut the fuck up with the rings argument. So much beyond any individual's control has to go right to win a championship for a team sport like baseball. I don't want to hear DICK about it. Talk about his postseason stats until you're blue in the face. They're great and he 10000% rose to the occasion on the biggest stage. That doesn't mean he single handedly willed his team to victory.

In the end, I just like to point out and refresh people's minds about what Derek Jeter really was as a baseball player. Good player? You bet. Is he some deity that should have gotten a fucking retirement tour when he said he was calling it quits? No SHOT. He was Craig Biggio. Literally the same players. It makes me sick that baseball sucked him off like they did.