I have a lot of thoughts on week 1 of college football. Let’s dive right into the top 5 that stood out to me after the 1st Saturday.

1. Alabama is still the King

We all heard the preseason talk. The Tide only had 3 starters back on offense and had to regress some after pillaging everyone to win the 2020 National Title. The schedule was harder BLAH BLAH BLAH.

The Crimson Tide massacred Miami 44-13 in a game that honestly was still not as close as the scoreboard. They are bigger stronger and faster than everybody and made Miami look like a JV team. Bryce Young looked the part at QB and is now a ridiculous +150 to win the Heisman on Barstool Sportsbook. The defense doiminated after being hailed as the strength of the 2021 team. Same old s***, new year. 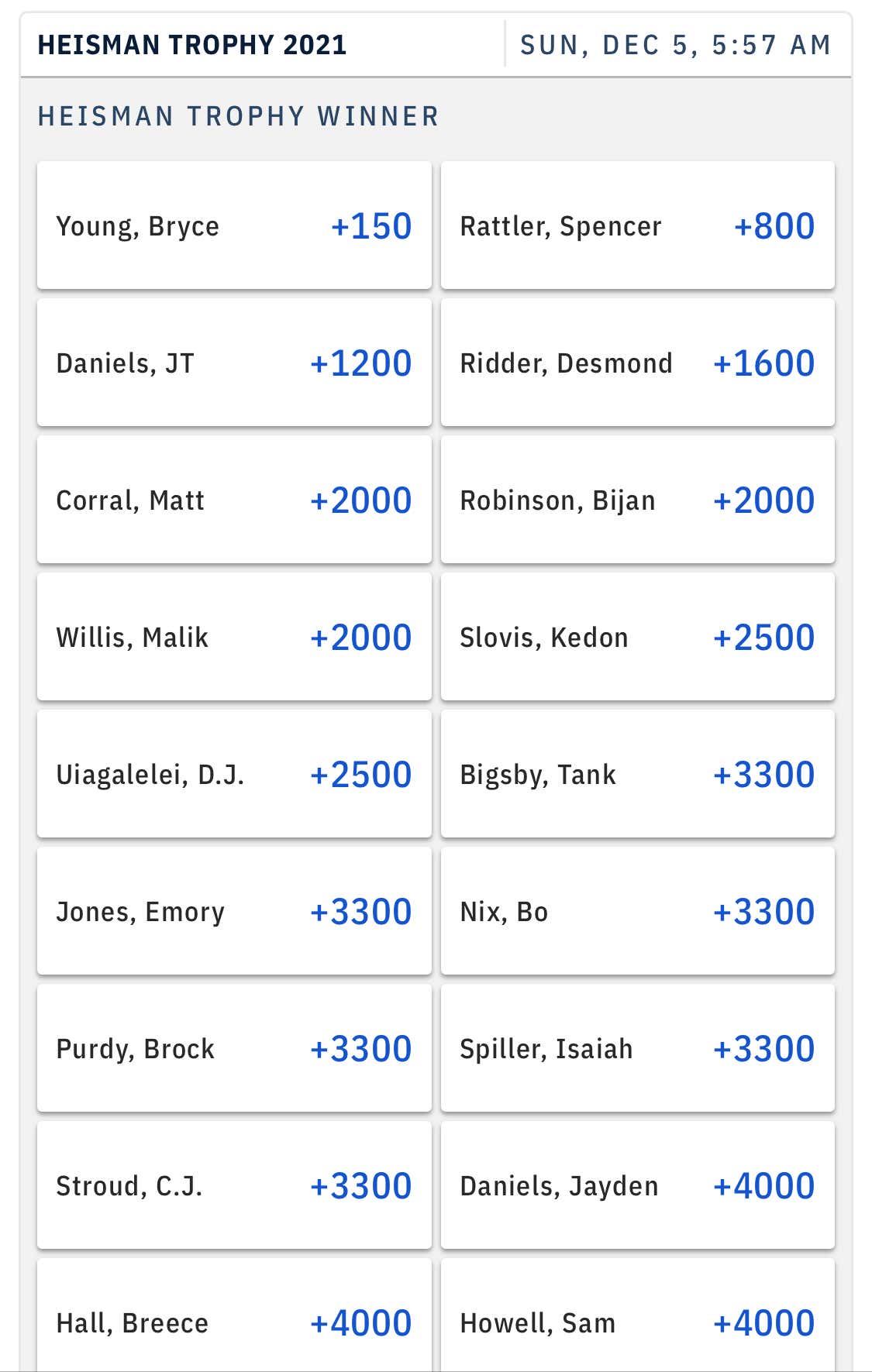 Georgia knocked off #3 Clemson 10-3 behind one of the strongest defensive efforts these eyes have ever seen in a big game. The Bulldogs held Clemson to 2 yards rushing & only 178 total with 7 sacks. Clemson did not score in the 1st half for the first time in 143 games!

Nakobi Dean looked like a mad man flying off the edge. Jordan Davis was unblockable on the interior of the defensive line. The Clemson Offensive line got embarrassed, the WRs could not separate and DJ Uiagalelei had no chance in hell all night. Christopher Smith had a 74 yard INT return for the game’s only touchdown.

Georgia passed its biggest test and now gets to feast on a pretty weak SEC East with Florida looking shaky. Alabama is not on the schedule in 2021 either. It is full speed ahead for the Bulldogs to the SEC championship in Atlanta.

3. The LSU Tigers Are Not Back

I am eating serious crow. UCLA handily beat the Tigers 38-27. It never felt like LSU had a chance as they were dominated on both lines of scrimmage. The defense was out of place all night and the offense could not run the ball. After one week, there are a ton more questions than answers about new DC Daronte Jones. All the blame from last year went to Bo Pellini and that looks like a mistake.

Chip Kelly reminded everyone why he’s a great football coach. In year 4, he now has his guys on the field with lots of experience. I am adding UCLA +350 to win PAC 12 South and +600 to win the PAC 12 in Barstool Sportsbook with Oregon and Washington looking shaky.

4. Mississippi State Gets Away with Murder and What the Hell was Skip Holtz thinking?

After jumping out to 14-0 lead early, Mississippi State allowed a whopping 34 unanswered to LA Tech! Tech’s defense was all over the field forcing turnovers and State looked dreadful. Transfer QB Austin Kendall was steady in just first start. I also was giving Walker a hard time on the stream.

Trailing 34-14 with under 13 minutes left, the Bulldogs stormed back and the live stream got wild.. Marty Mush had a rare moment of genius suggesting everyone to bet Miss State +430 live on Barstool Sportsbook when Tech was leading 34-21. Brandon Walker, Ev, Kayce and Marty all took the bet.

I loved that bet as I have seen Louisiana Tech blow games like this at Arkansas and South Carolina in Skip Holtz era. They are notorious for playing well as an underdog but not being able to close games.

Mississippi State scored to take a 35-34 lead with under 3 minutes left. LA Tech QB Kendall led the other Bulldogs down the field and into field goal range with just under a min left. Tech bad the ball at Miss State 29 then Skip Holtz melted down completely,

I am a big Skip Holtz fan. He has that program in bowl games every year and sends players from Ruston to the NFL regularly. But there’s never any excuse for what he did with the game on the line.

He had Tech waste the last 50 seconds running the ball to settle for a 46 yard field goal. Gutless move. There’s no getting around it. With 1-2 more first downs, Tech would gain a 20-30% chance to make the kick.

When kicker Jacob Barnes predictably came up way short on the 46 yard kick, Walker and the crew exploded on the stream.

If I was a Tech fan, I would not be able to get over this game for years as they blow a 3rd chance to get a massive road win over an SEC school.

I am still in shock that Tulane almost won at Top 5 Oklahoma on Saturday. This game was scheduled for New Orleans until Hurricane Ida demolished the city and surrounding areas.

Despite trailing 37-14 at halftime and being homeless, the Green Wave fought hard and barely lost 40-35 in a thrilling comeback.

No one saw that coming! QB Michael Pratt won a lot of hearts with his gutsy performances and I look forward to following Coach Willie Fritz’s team the rest of the way.

South Louisiana is known for resiliency in hard times. Tulane could not have exemplified that fighting spirit better.

Man I love the Fall!