In order from last to first:

I'm sorry but if you enjoy these you are the most vanilla, boring person on the planet and your opinion is wrong. The only reason someone should ever eat these is desperation & lack of options. You wake up hungover at someone else's house and as you slink out to get your Uber these are on their counter for some ungodly reason then fuck it, fine. You need some sort of base in your stomach to get you home so it'll do for now. Side note - Some might argue it's a blank slate to add onto (like some strawberries & whipped cream!) but a snack cake should be able to stand alone. I'm eating a pre-made snack cake because I'm too lazy to make something & have generally given up.

Much like with the pound cakes I don't want something so bland. Vanilla on vanilla on vanilla? Light, bright, and cute? No thank you. I'm here to feel like a real piece of shit.

Like brushing your teeth with a chocolate sponge. Stick with the classics.

I'll say it, they just don't compare to Entenmanns. Once you've had those the others can't hang. The chocolate is simply not thicc enough.

If you don't have a drink handy these will dry out your mouth to the point of no return & you'll be left trying to move your tongue around like a dog with peanut butter on the roof of its mouth. However, if you've got an ice cold glass of milk, game on. Dunk & go and you can eat dozens in one sitting.

You don't feel like laughing after housing a whole box of Funny Bones hunched over the coffee table in the dark at 3am hating yourself, so yes, they really get the job done. Exactly what you want for the job at hand.

They'd be better with creme in the middle but still sweet, crunchy on top & good with cheap bodega coffee when you've fallen on hard times.

Satisfying! Plus great with chocolate milk, especially YooHoo. That's it & that's all.

Getting these in your lunchbox as a kid was a head-turner; anything swirly is immediately more exciting. If you've been hitting the 3Chi or whatnot I heard it's a real treat to shove several in your mouth at once as all the textures crumble together. Those thin little slivers of chocolate shell… yes.

Not just picking this as #1 because I'm a Marine ha ha. Now, a lot of people might shit on this choice, but before you do I implore you - put them in your freezer. A frozen Devil Dog with milk is an absolute game changer & you will get hooked. I can't stand them regular, but ice cold? It unlocks something magical… It's like if an ice cream sandwich were a cloud. You will not be disappointed. 10/10. For proof, I have been spreading the good word for a minute now: 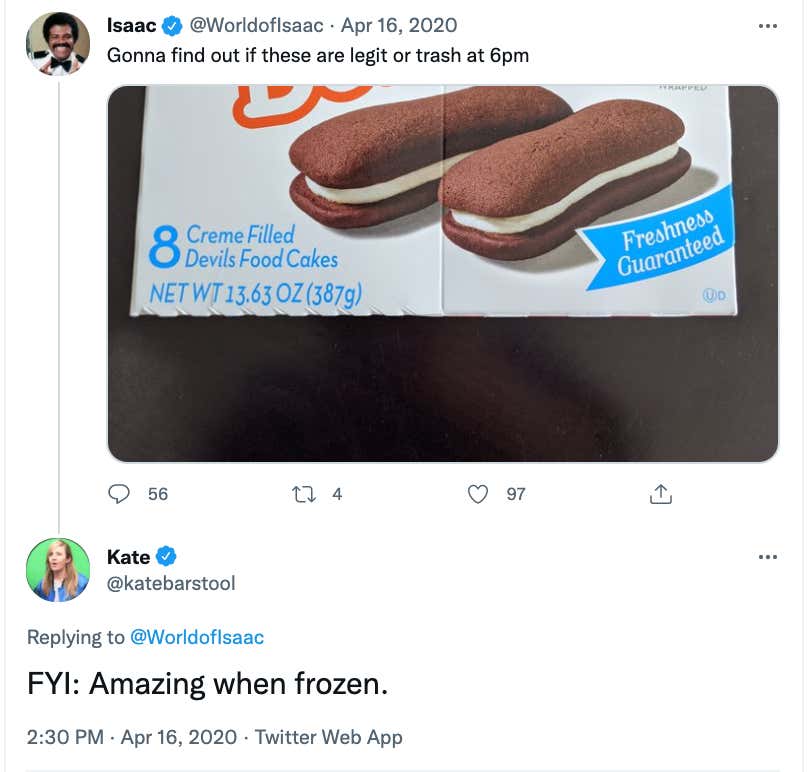 Welp, there you have it. Let me know in the comments what your favorites are, or if you think I'm just a big, stupid idiot and you're mad you clicked this.