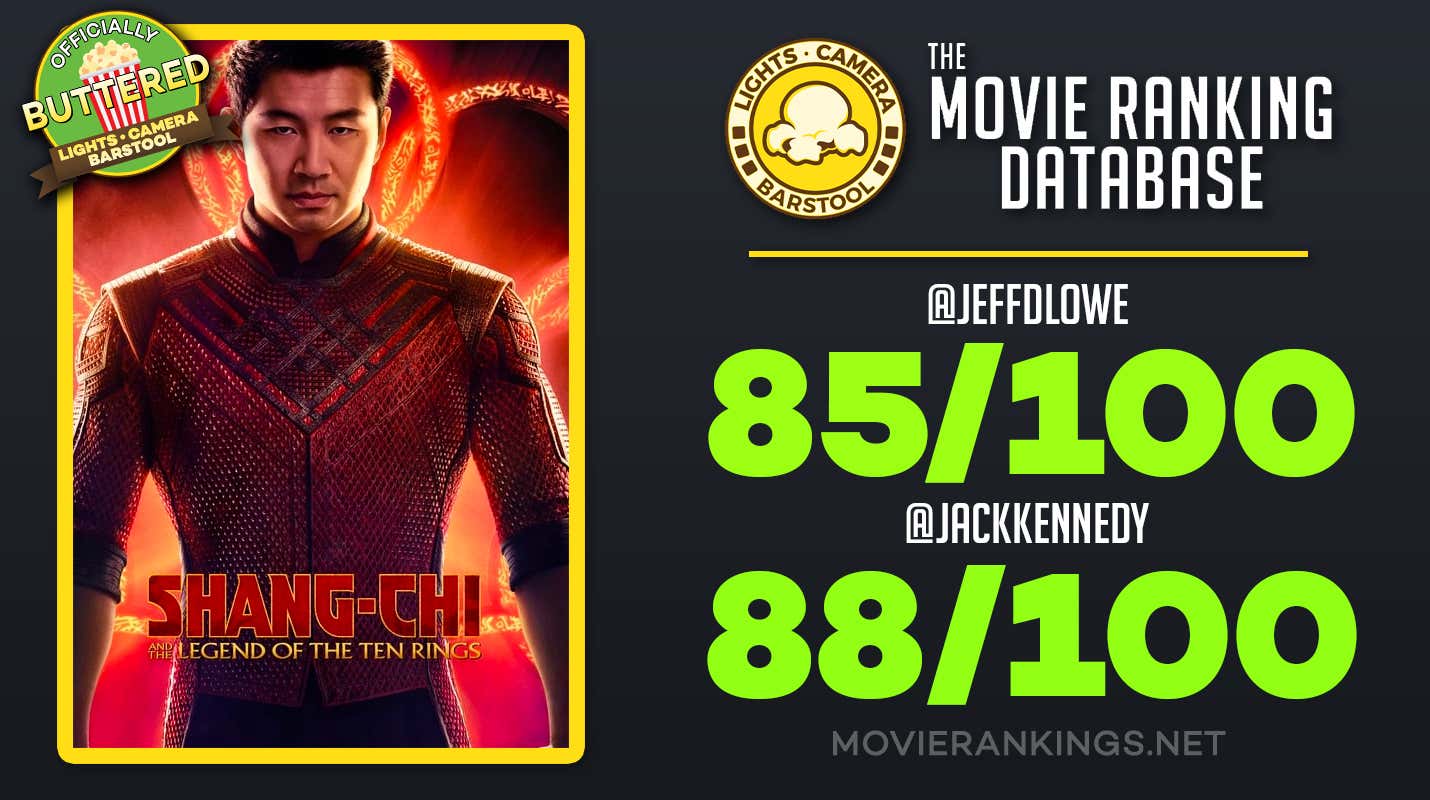 Shang-Chi must confront the past he thought he left behind when he is drawn into the web of the mysterious Ten Rings organization. (via MovieRankings.net)

JeffDLowe (85/100): 'Shang-Chi' was fucking awesome! Here are my thoughts…
- Easily some of the best action we've ever seen in the MCU
-- The martial arts elements make this movie feel unique, fresh, and different
-- There is a beauty and grace to the fighting and I am amped to see more in the MCU
- It's as fantastical as any MCU movie, and "different" is good for this growing Universe
-- The weirder and more "different" Marvel can be, the better things will go
- Simu Liu is yet another great character addition to the MCU as Shang-Chi
-- Others: Yelena (Florence Pugh), Kang (Jonathan Majors), Sylvie (Sophia Di Martino)
-- The MCU is just piling on new characters for us to enjoy
- Tony Leung as Xu Wenwu is a Top 5 MCU villain for me
-- Evil, ruthless, yet oddly relatable villains is where the MCU shines
-- Yes, Thanos and Killmonger were brutal, but you understand their points
-- You get the same with Wenwu, he's a villain, for sure, but you understand his purpose
- I also loved Meng'er Zhang as Xu Xialing, Shang-Chi's sister
- Awkwafina was also great in the sidekick role
- It's not the smoothest story in the world, and that is where it lacks at times
-- You can tell they tried to not fully commit to a straight origin story, but…
-- It's unavoidable due to the nature of how new this character is on the screen
-- Because of this, it sort of gets muddied up at times
- The Easter eggs, ties to the past, and credit scenes are all fantastic
-- For the sake of spoilers, I won't say anything else…

'Shang-Chi' is by no means perfect, but man is it fun and entertaining as hell. It's also a movie that I think we will look back on the more we get to know Shang-Chi as a character and enjoy it more and more. That's been the case with movies such as 'Doctor Strange', and I see that happening again here. See this movie, and see it in IMAX!

KenJac (88/100): For those of you hoping for 'Shang-Chi' to be something different, I think you are going to be very happy with this movie. It has the action, scale, and humor we expect out of any Marvel movie while giving us a very different world to enjoy. It definitely falls into some origin story cliches but is overall a great group experience for those of you going to the theaters for it.

Those of you that know LCB know that I’m still working my way into the world of actual comic books, so I was not too familiar with the actual character of Shang-Chi going into this movie. For that reason, I was happy that they were liberal dealing out backstories so that I could build sympathy with him and interest in his world. And that world was AWESOME.

For a universe as massive as the MCU, I feel like we haven’t had a ton of mysticism. 'Doctor Strange' and 'WandaVision' felt different from what we get in 'Shang-Chi'. That is to say that 'Shang-Chi' felt almost entirely disconnected from the MCU where 'Doctor Strange' and 'WandaVision' definitely had more connective tissue. It’s to the point where I am confident that someone who has never seen an MCU movie will still have a great time with this.

I can’t point out a single bad performance in this movie, which is also a plus. As a big fan of Kim’s Convenience, I was scared for Simu Liu taking the leading man jump in something as massive as a standalone MCU role. I think he nailed it, bringing the same level of charisma and swagger he had in Kim’s to this role. Awkwafina delivered yet another role in a string of them since ‘The Farewell’ that has positively changed my take on her as an actress. The big star of this movie, though, is Tony Leung. His performance as The Mandarin (the TRUE Mandarin) is a top-5 MCU villain performance. I think number three overall for me behind Thanos and Killmonger.

Also just from a pure entertainment aspect, I think you are going to love the action. The martial arts inclusion of the fights made them some of the coolest I’ve seen in the MCU since 'Captain America: The Winter Soldier'. They had awesome moves, nods to Wuxia fighting, and a solid blend of CGI to elevate fights beyond. At the end of the day the action, humor, and entertainment are what makes Marvel what it is, and why they are almost always worth the price of admission.

--
The movie is Officially Buttered and is a must-see for all Marvel fans. See it in theaters! Go to the movies! Have fun! You can head to Lights Camera Barstool right here to listen to our latest episode where we discussed the movie in full.