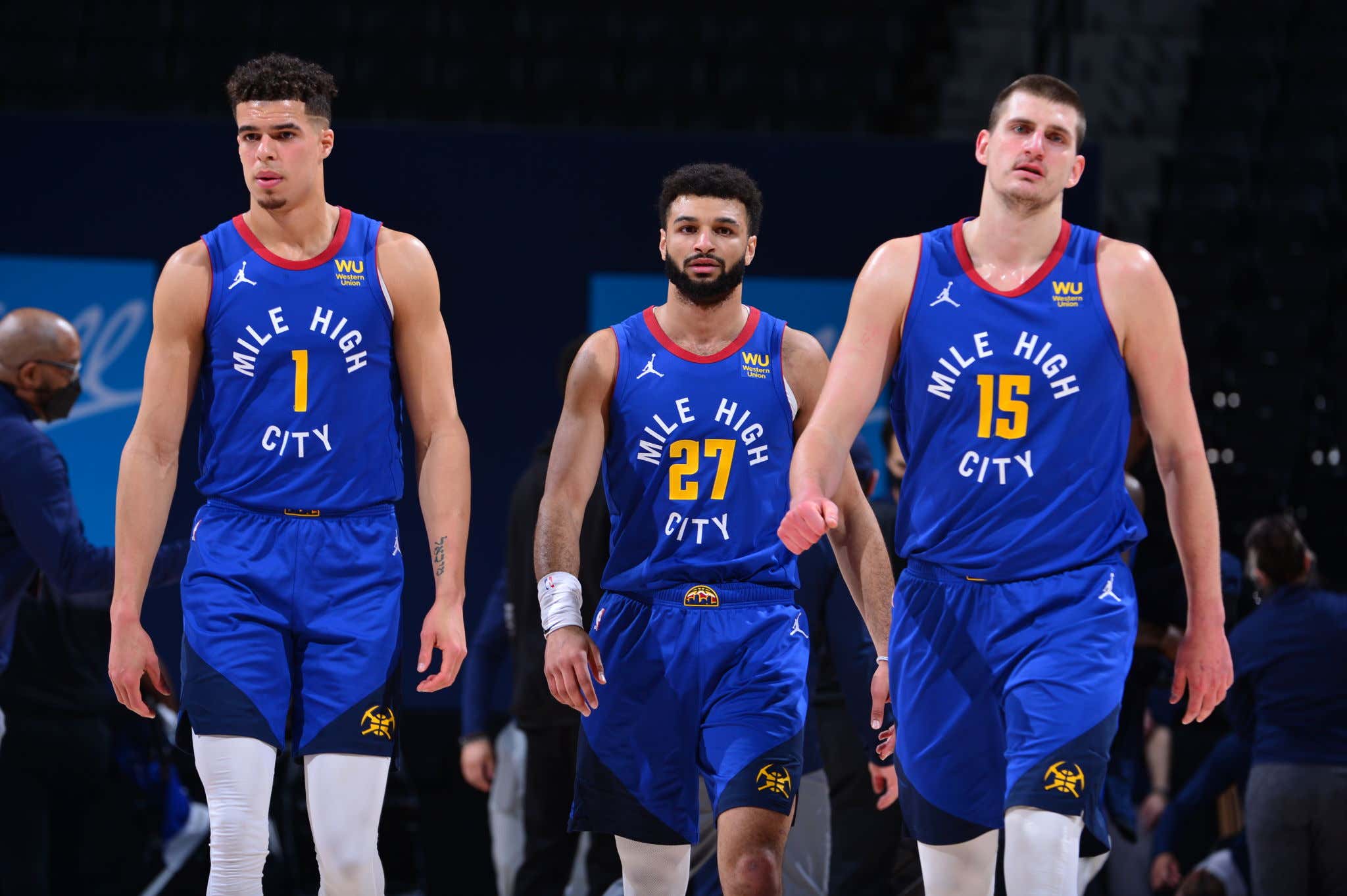 Interesting results here between two teams who I consider to be in pretty similar spots entering the 2021-22 season, but the people have spoken. Today we're talking Nuggets basketball. When you think of contending teams in the Western Conference, it'd be silly to leave the Nuggets out of that conversation these last few years. They've won 54, 46 and 47 games these last three seasons while finishing the regular season as a 2 seed, 3 seed, and 3 seed. These are not the same Nuggets we saw from 2013-2018 that missed the playoffs every year and only won over 40 games a total of one (1) time over that span. It does seem like for whatever reason they never really get the same respect as other Western Conference teams that have similar success, and am I crazy to suggest you hear way more about teams that aren't as good like DAL or POR? Yeah, they haven't made a Finals or won a title yet, but in each of the last three seasons they've won at least 1 playoff series and had a WCF run. Can every Western Conference "contender" say that? Nope. Shit, the internet couldn't help themselves last year when it came to trying to make the case that Jokic wasn't a deserving MVP despite him having one of the most dominant seasons at his position the league has ever seen. It's very weird. The Nuggets are good, it's not that big a deal.

But the expectations around this team for 2021-22 are a little different in my opinion. Before we get to that, let's revisit what they did this summer and what their roster currently looks like 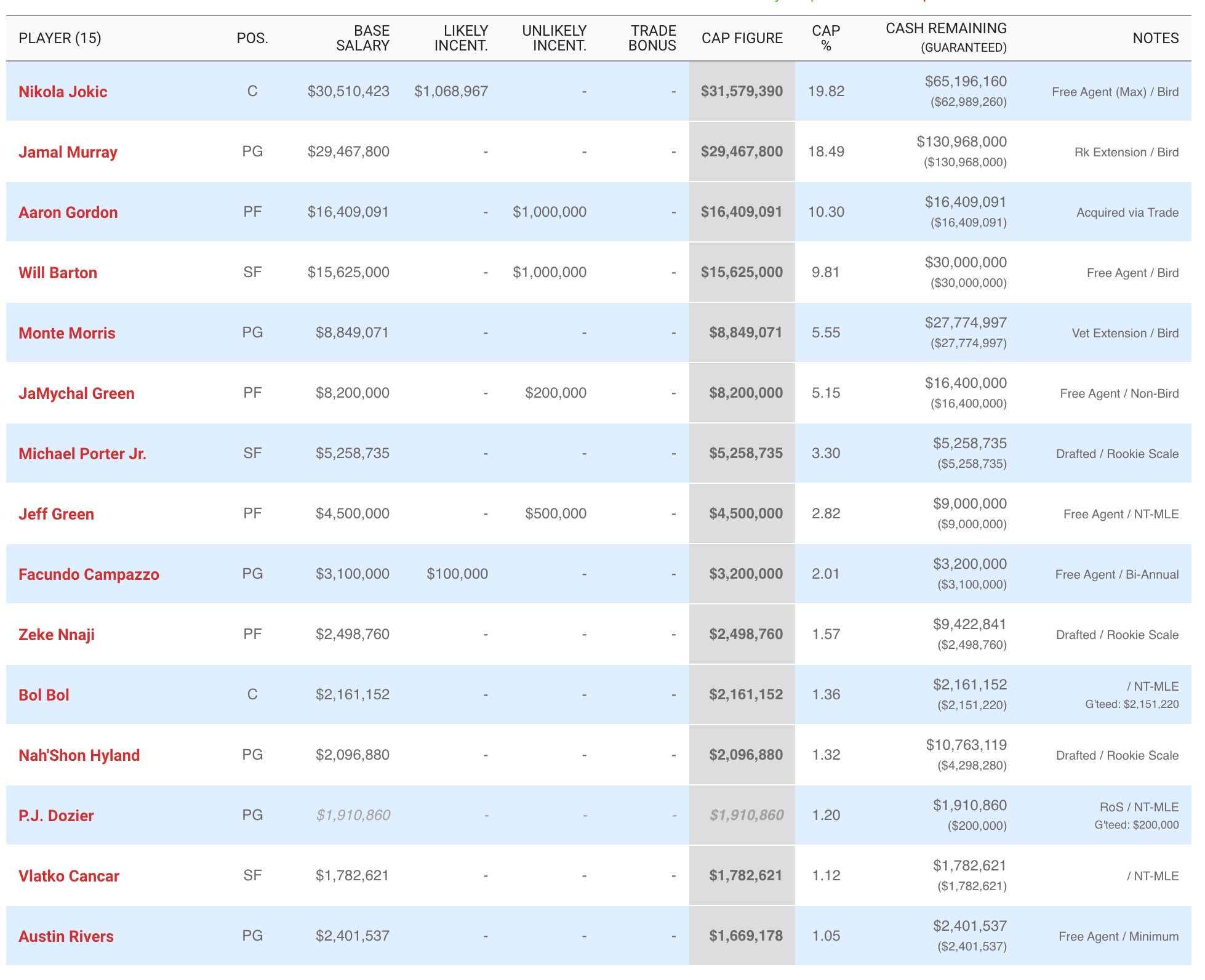 In total, you're looking at a roster with the price tag of $135,208,538 which is good for 12th in the league. Not terrible for a "small" market team. What you should like about the Nuggets cap sheet if you're a fan of this team is their mix of contracts. They have big money salaries, mid level, and low numbers. That's extremely helpful if they get the deadline and are looking to make a trade. This obviously doesn't include the pending MPJ extension that will happen sooner or later, but there really isn't a bad contract on their books in my opinion.

Of course, when you're talking about the Nuggets heading into this season you have to start with the obvious, which is Jamal Murray's ACL injury. As of now there is no timetable for his return, but if you look at history and the full 12 months it usually takes guys to get back, you're looking at maybe the playoffs for a Murray return. That's what made his injury so devastating last year. Right before the playoffs on a team that looked great, and then the reality that he would most likely all of the next season as well. Any time you're without your 2nd best player for the entire year, your expectations should change. Maybe it's just me, but the same with Kawhi and the Clippers, I think whatever you get from the Nuggets this season without Murray is basically house money. There's definitely enough talent on this team to be competitive, but Murray was so important to how they play and the success they had on a nightly basis during the regular season. It wouldn't shock me if this team fucked around with a 5-6 seed and it wouldn't shock me if they were in the play in. In trying to figure out what type of season they might have, you have to consider a few factors.

For starters, Nikola Jokic looks FANTASTIC as he prepares to defend his MVP. I'm not even kidding, look at this dude!

This is without a doubt the best Jokic has looked to enter a season that I can remember. In case you forgot, this is what he was able to do last year

So right off the bat if you tell a Nuggets fan that while it might stink they enter the season without Murray but they could be getting the best version of Jokic they've ever had, that's exciting. Any time you still have an MVP available, you're going to be pretty good. It's hard to find a thing that Jokic cannot do on the basketball court, and now if his conditioning is even better, why can't he go up a few levels?

It's not just the fact that this dude can flat out score, but it's the efficiency that stands out. He shot at a pretty good volume too, with 13.4 FGA and 6.3 3PA a night so his percentages aren't exactly flukes. Even when things tightened up in the playoffs without Murray, he still managed 17.4/6.2 on 47/39% splits with 2.9 3PM a night. On the offensive side, he's legit as they come in terms of a scoring wing, and he'll have every opportunity to increase his usage rate now that Murray is out. It could very well be one of those situations where a player has another breakout year immediately after his breakout year. Of course, it's not all positive. Defensively things are still pretty bad, but at 22 years old I'm not ready to say that can't improve.

You also have to factor in Aaron Gordon feeling more comfortable in Denver and having an actual camp with the team. That should help. People maybe forget that when Gordon first came over from Orlando the Nuggets were killing the entire league. They also get Will Barton back healthy, and while non Nuggets fans might say "big deal it's Will Barton'….uh yeah, it is a big deal for the Nuggets. He only played in 3 playoff games last year and is a starting caliber player for them. That matters. So you can see, with some internal development and guys returning from injury, there's plenty to be excited for when it comes to the Nuggets.

What I don't think they did this season though is address something that ended up being exposed last year, which is their guard play. They drafted Bones Hyland who was so much fun to see in Summer League, but he's a rookie. The Nuggets enter the season with the same Monte Morris/Facundo/Austin Rivers/Dozier guard rotation which would make me nervous. You never know what to expect when you have to rely on someone like Austin Rivers for example. He'll have two weeks where he looks incredible, but then as soon as you start to believe he'll crater and basically be unplayable. Facu is a good passer, but he's small. Looking around the West and what that position looks like, this is easily a top area of concern for the Nuggets heading into the year. Any sort of injury to Monte Morris is going to put them in a bind big time.

In terms of their style, I can't imagine much changes. They'll play through Jokic, he'll continue to be the best passing big man in the league, and they'll once again be among the league leaders in post up frequency (3rd) obviously. What makes them so tough to guard is the fact that when you have a player like Jokic, off ball movement is key. The Nuggets basically cut you to death. Only 2 teams in the league cut more than the Nuggets do, but they dominate in terms of frequency (8.9%) and overall cutting percentile (72nd). With no Murray, this is now even more important. Guys are going to have to be effective and consistent moving without the ball so Jokic can find them. Look at what Aaron Gordon did when he came over. Finding ways to get easy baskets will be what carries this team.

Between post ups, cutting, and P&R offense through the roll man, the Nuggets do have an old school style. That's not surprising since they play through a big man, but it'll be interesting to see if they can make any leaps when it comes to their outside shooting. Obviously teams will double/triple Jokic more, so the opportunities should be there. They finished just 16th in 3PA last year and 15th in 3PM. The encouraging part is the fact they were 8th in 3P%. This team is built to play fast and can find ways to get shooters open in way that don't rely on point guard play.

At the end of the day, the one thing that keeps holding the Nuggets back when things matter most isn't all that different from other fringe contenders out West. It's their defense. They had a 122 Drtg last playoffs which was the 13th out of 16th teams. Barely better than the Blazers (who are in a similar spot) and the decimated Celtics (last). I wouldn't exactly say Jamal Murray is a lockdown defender, but this has been an issue over the last few seasons. In 2019-20, their 115 Drtg was 12th out of 16. In 2018-19 it was 111 which was good for 10th. So essentially, it's gotten worse in each of the last three seasons. That's not great. Offensively they've been fairly dominant in the postseason, coming in 4th, 5th, and 2nd. But as we've learned, if you can't stop anybody in the playoffs, offense doesn't really matter.  I wouldn't even say their defense during the year is bad, it came in at 11th during the year last year, but the playoffs are a different animal. If that doesn't get sorted out, the Nuggets will never get over the hump. Just look at last year when they got swept by PHX. They gave up 122, 123, 116, and 125 points. I mean no fucking chance you're getting past any good team giving up that many points no matter how good your offense is.

I think Nuggets fans are ready to not just have a great regular season only to flame out in Round 2. They've earned the right to be talked about among the better teams in the West, but they now enter the group of teams that whatever they do in the regular season doesn't really matter. For them, what matters is the playoffs and finally breaking through.