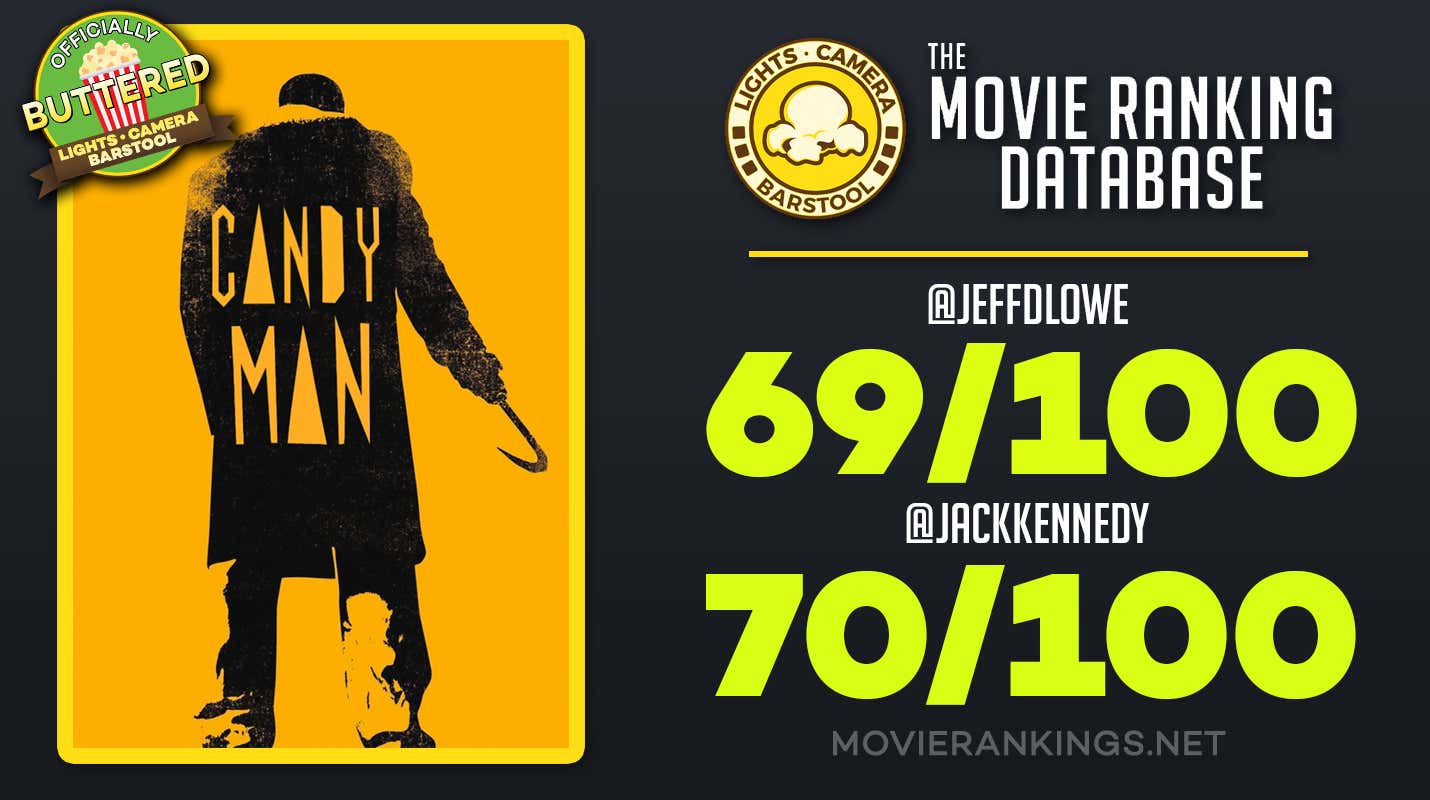 'Candyman' has been a highly-anticipated movie for quite a while, and after many delays, the sequel is finally here…

Anthony and his partner move into a loft in the now gentrified Cabrini. After a chance encounter with an old-timer exposes Anthony to the true story behind Candyman, he unknowingly opens a door to a complex past that unravels his own sanity and unleashes a terrifying wave of violence. (via MovieRankings.net)

JeffDLowe (69/100): I will keep this short and sweet, but I was fairly let down by 'Candyman', the sequel to 1992's… 'Candyman'.
- First off, make sure to watch the original first, this is a direct sequel
- The movie looks fucking incredible, that has to be said
- Director Nia DaCosta clearly has a great vision, and I am excited for more from her
-- She is also the first black female filmmaker to open a movie number-one at the domestic box office
-- That's awesome to see, and I am amped for her to direct 'The Marvels', the Captain Marvel sequel
- The acting is also top-tier in this movie
-- I love what Yahya Abdul-Mateen II, Teyonah Parris, and Colman Domingo have to offer here
-- There are also some great returning actors, but I won't get into spoilers all that much
- The first two-thirds of the movie is solid, but they are weakened by a brutal third act
-- For some reason, the movie feels rushed and almost incomplete, as if they ran out of pages
- There is a weird mix of things not feeling fully explained, but also knowing too much at the same time?
-- On one hand, stuff just sort of happens with either too quick of the moment or not enough explained
-- But at the same time, the mystery and intrigue supplied by the supernatural elements of the first movie doesn't hit the same
-- Is that a problem of making a sequel to a movie that doesn't necessarily need one? Maybe…
- The pieces for a good movie were there, but the story just doesn't exactly hammer home a big final punch

KenJac (70/100): The individual parts of this movie are better than the whole. That is to say, the cast, the cinematography, the score, and the killings were all really impressive, but the way it all came together just was a little lacking. I think it comes down to the story's structure and the script, which kind of veers off in the third act.

First off I wanna note that Yaha Abdul Mateen and Teyona Prince were really good, but I was most impressed by Colman Domingo. Every single movie or show I see him in I am just more impressed with the quality of actor he is. 'Selma', 'If Beale Street Could Talk', 'Ma Rainey’s Black Bottom', and 'Euphoria' were all really impressive from him. He just has this real regal, Shakespearean delivery that I don’t think you get a lot in Hollywood these days. This wasn’t HIS movie or anything, but this is just my love letter to his work.

On the technical end, I really liked the shadow puppets thing and I loved the locations, the way it was shot, and how they paced out Anthony’s descent into madness. They got really solid suspense throughout, but also never really scared the audience too much. It almost felt like this dipped the toe just a bit into the arthouse-esque, slow-paced horror which is a very different vibe from the original candyman.

And It is obviously a very different movie from the original Candyman in a lot of ways. They try to inject a bit of social commentary here and I just feel like it was lacking the same finesse of the other Jordan Peele projects 'Us' or 'Get Out'. And that’s not to say those two movies had the same methodology. Get Out was more direct on purpose while 'Us' was a little more subtle, but they both accomplished the same goal. This movie just didn’t have the same touch and I felt like that damaged it a little bit.

Overall, I really liked a lot of different parts, but the whole was just lacking that same edge or complete feel that good contemporary horror movies have. It’s WAY better than the ROI slop horrors that get pumped out to make money off teens, but also not in that tier above that expected it to be in. It was just missing that satisfying final bite in the third act to bring it to that level.

--
The movie is Officially Buttered, by the slimmest of margins, and still worth a watch despite its shortcomings. See it in theaters! Go to the movies! Have fun! You can head to Lights Camera Barstool right here to listen to our latest episode where we discussed the movie in full.