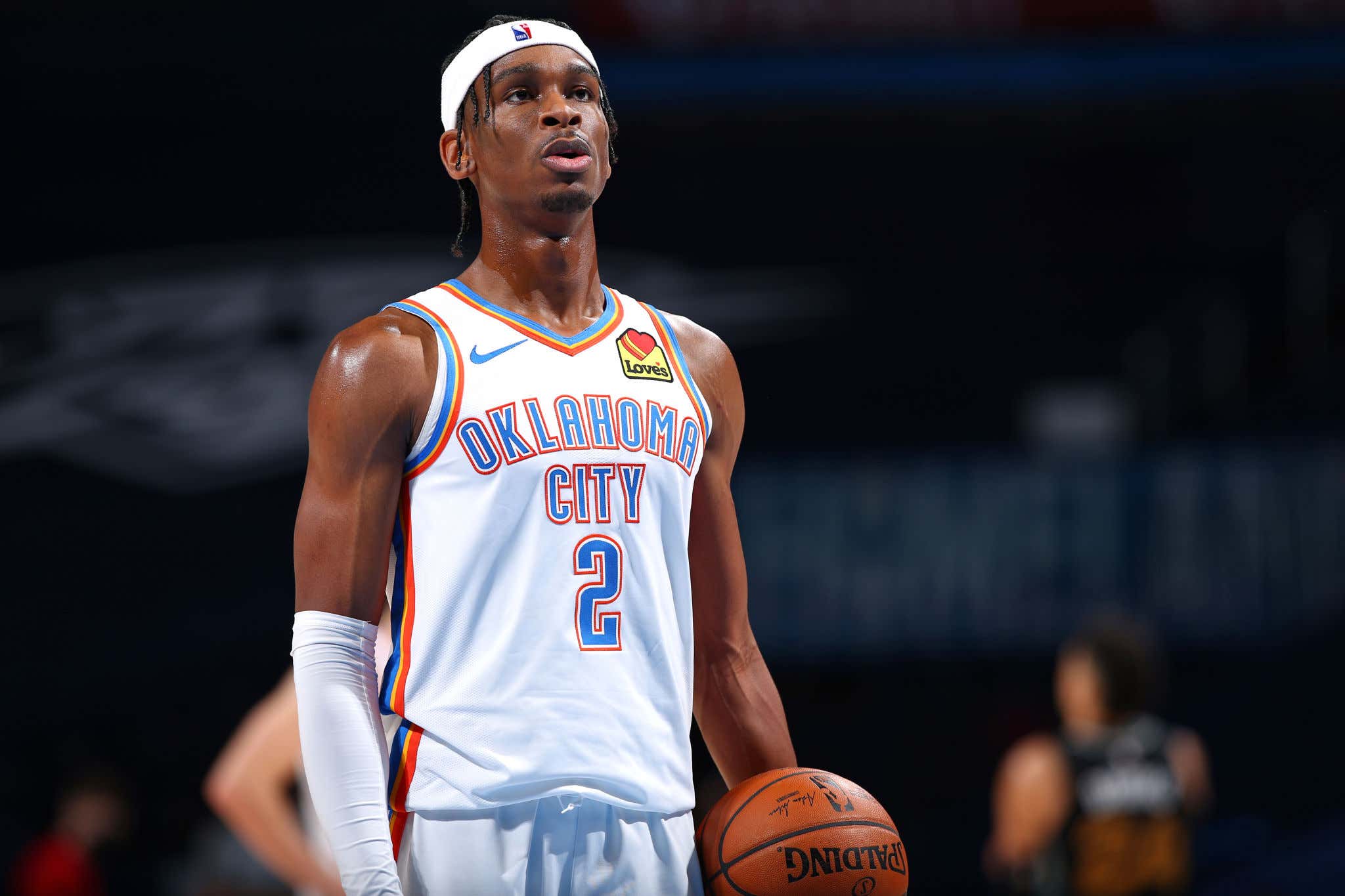 So far in this preview series we've mostly dealt with teams that are hoping to make deep playoff runs with ATL, DAL, MIA, and GS. While it's fun to talk about the good teams, that's not the plan for every team in the league. Some are going to stink. For a few, it may not be their fault, they could enter next season and want to win, but can't because ya know…they stink. Then there are some that have no interest whatsoever in winning NBA games because ultimately that does more harm than good when looking at the bigger picture. That's been the life for the Oklahoma City Thunder and their fans the second the Chris Paul era ended. Looking back at their history, it's been a long time since they've been this bad. They won 22 games last year, which by all accounts is not good. Before that? They hadn't won under 44 games since the 2008-09 season. I suppose that's what having MVPs and high end blue chip talent will bring you, despite them never getting out of the first round since 2015-16 and we all know what happened after that 7 game series against GS in the WCF.

In the NBA, you can rebuild a few ways. You can make an awesome trade which allows a team to tank for you and you get all their unprotected lottery picks, you can buy your way back into contention, or you can lose, lose, lose and then lose some more while accumulating assets and high draft picks in hopes that one of those picks hits on a stud player. The Thunder made it clear what route they were going when they essentially shut down their best players last year because they were actually too good and were helping them win too many games.

But before we talk about what to expect this upcoming season, let's revisit what they did this summer

As you can see, it was more of the same this summer. Out with good players, in with young guys/picks, and an extension of their franchise player (5/172M). As it stands today, this is their roster heading into the season 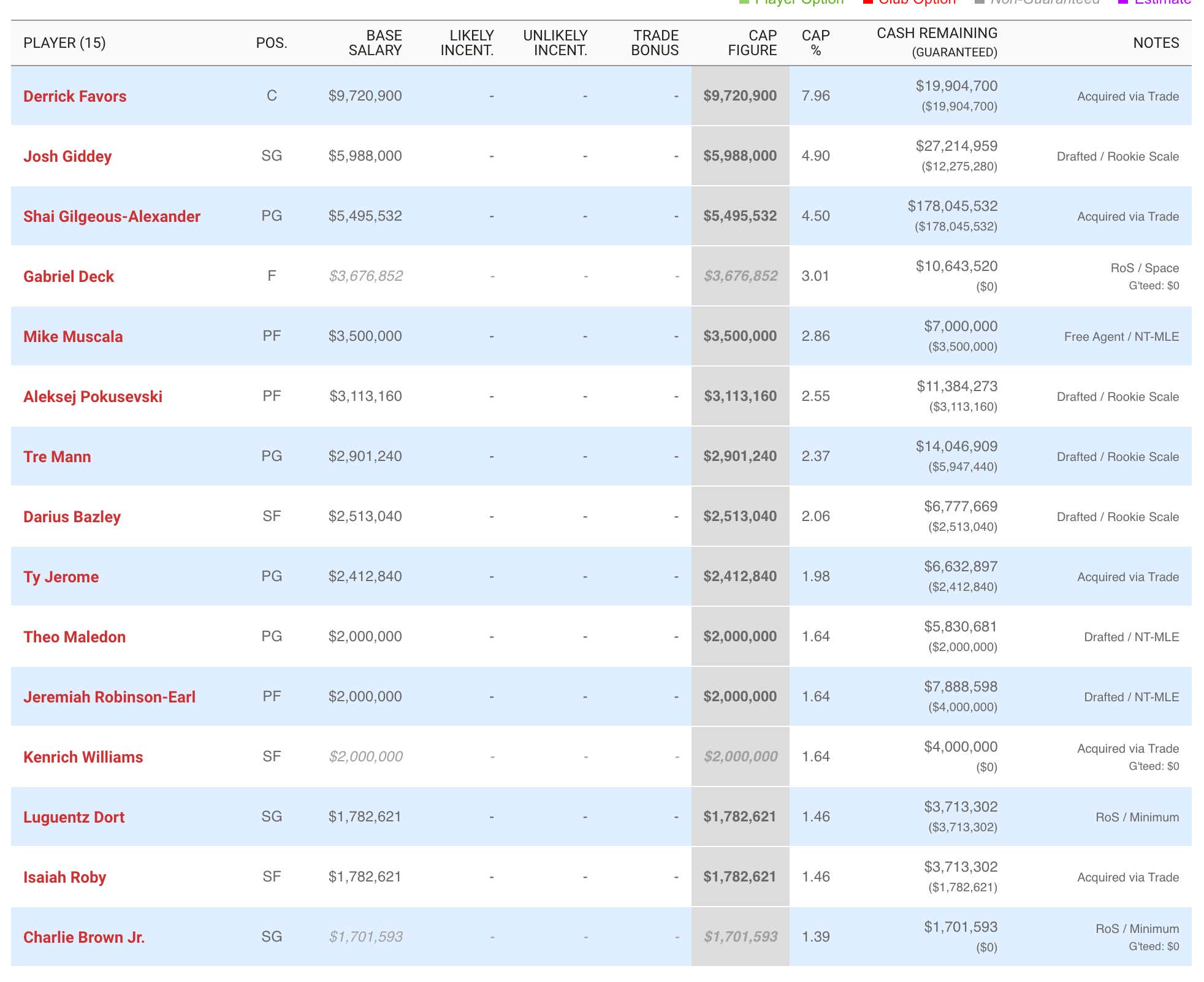 In total, at $50,588,399 it's the 30th most expensive roster in the NBA. That's last for those of you who may not be the best at math. Even with 15 players under contract, they are around $30M under the Pistons who are 29th. If you're rebuilding, this is what you want though. There's no point of having big money salaries on your books, and instead you are now open to take in bad contracts in return for assets from a team that maybe wants out of a certain deal. We just saw them do that this season with Kemba and the Celts. They ended up buying him out and spending like $60M just on the 16th pick which then turned into 2 lower 1sts, but that's a different discussion of asset management. They are the only team in the NBA with any sort of cap space (35M), which is good flexibility to have as you enter the season. You never know when it could be time to pounce. We should also mention the fact that they have no fewer than 1 billion draft picks over the next 6-7 years. It's a bit outrageous when you see it all typed out. All in all, they have 36 picks over the next 7 years, 18 first and 18 second round picks. That's wild.

As someone who lived through the "assets" life, Thunder fans will learn that draft picks are cool…..in theory. The possibilities are endless when talking about draft picks, but the second there is a name put to that pick, it loses value. If the plan is to use some of those picks and flip them in a trade for good talent down the line, the clock is ticking. Because once teams know you have too many picks for your own roster spots, the value craters. Just as Danny Ainge. Everyone has been sucking Sam Presti's dick for stockpiling picks, but we still have no clue what the hell he's going to do with them. There's a good chance a large chunk of those picks end up meaning nothing. It's the ultimate job security for a GM, but you have to deliver on your picks for this strategy to work. Ainge was able to do that with his high lottery selections during their rebuild, but the later picks were a mixed bag. That's the challenge Sam Presti now has.

When it comes to the players on their actual roster though, there are some intriguing players. For starters, SGA is fucking awesome. He's easily one of the most underrated point guards in the league in my opinion mostly because few people are probably watching the Thunder play

There's a reason the team still gave him a 172M extension despite only playing 35 games last season. He's very much what you're looking for in terms of a young franchise player who is only getting better. Also FWIW I sat next to SGA in Vegas during Summer League and he gives off extremely cool vibes. I'm not sure how that matters but I know that it definitely does. In terms of his basketball talent, he has it all. He's efficient, he has good size and playmaking ability, he's a three level scorer, and the hope is as he ages he improves on the defensive end. It's a pick your poison situation when it comes to SGA. He can beat you in isolation (71st percentile), he's downright elite in P&R (93rd percentile), you can play him off ball because he shot 49% as a spot up shooter last year (74th percentile), shit you can even run him off screens if you want (61.5% FG). You could make the case that the Thunder have landed the hardest part of a rebuild in SGA, and his development should have OKC fans very excited over these next 6 years.

Outside of SGA who we know is a proven commodity, they also hit on another young talent in Lu Dort. I fucking love Lu Dort. A big part of it is our ASU connection, but I also love watching this dude play. If that offensive jump we saw last season is for real, Dort is going to be a two way beast for a long time

There aren't a ton of guys in the league who can handle James Harden 1 on 1 with no help, but Dort seems to fit the bill. If you're looking at young backcourts throughout the league, a SGA/Dort combo is a good place to start if you're a rebuilding team. Dort is basically a Marcus Smart 2.0, a guy who will shoot around 39/35% yet will make big time threes, is a fantastic perimeter defender with a big body who can guard multiple positions and can play both on and off ball. To get that type of production while paying a dude just $1.7M this year and $1.9M next year is insane value for a guy who started 52 games last season. I imagine they offer him an extension next year, but if not he's going to have a big market in the summer of 2023.

Then you get to Poku. I don't know what to make of Poku. One day he looks like a guy who is million miles away, the next he's making 7 threes in a game and looks like the future of the NBA. It's wild

Poku is the perfect example of what the Thunder are doing. You swing for the fences. If Poku ends up being a miss, whatever you have a billion picks to replace him. If he hits? It's a homerun. It's important to remember this dude is one of the youngest players in the league. Chances are his body looks completely different in a few years once he's in an NBA program, but there's no denying his skillset. The ball handling, playmaking, and shooting is extremely rare for a guy over 7ft. They followed the same sort of plan for this year's draft pick Josh Giddey. A big point guard with size who shows real flashes but is still extremely raw. The optimistic side of being an OKC fan is that all these guys hit, just like the early OKC days when Harde/Westbrook/KD/Ibaka all hit. It's just so early in that process there's no way to know for sure.

As such, it's important to have the right expectations heading in. For a team that was 30th in offense last year and 24th in defense, there's really only one way to go. Getting SGA back in the lineup should help improve that offense, but it shouldn't surprise you if they are once again in the bottom third on both ends. Young talent is exciting, but it rarely wins. Especially in the Western Conference. What we don't know is what their goal will be this year. Will they still want to lose every game they play in order to have the highest pick possible? With no clear path to even flirting with the play in, that's a legit possibility. They do have DET's 2022 1st (1-16 protected), LAC's 2022 1st, and PHX's 2022 1st (1-12 protected) as well as their own, so if they want a high pick again next season, it's most likely going to have to be their own unless the Clippers somehow crater. Remember, they have to give ATL their 2022 1st round pick if it falls outside of 1-14. That tells me they will once again shoot for the lottery and the high lottery if possible.

That's why as an OKC fan, the focus should be around enjoying watching the development of their young talent while not expecting much in terms of results. Once they made it clear what their rebuilding path would be, the record doesn't matter. What matters is finding the right young talent and then developing that talent to be legit a few years down the road. If there's an ability to add via cap space/picks, you do it.

It's a gamble, but seeing as how the Thunder aren't exactly a free agent destination, I'm not sure what choice they had.