It's an absolutely gorgeous day in September. Skies are blue, breeze gently tousles your hair, and if you close your eyes you can almost smell the smoke from tailgates wafting through the air. The entire football season is at our feet and as is tradition Notre Dame leads the nation in both haters and doubters. Brandon Walker is saying under 9 wins. The calls of "overrated" are whipping around TV screens and message boards. Even a computer(SP+) is against the Irish and is predicting a 7-5 season for the Irish after 4 straight years of winning 10+ games.

The doubters are pointing to the loss of a quarterback, loss of 4 All-ACC offensive linemen, the top 2 WRs, and impact players at all levels of the defense. They'll say that is too much for any one team to overcome. I agree with them about that. Here is what the people who only read headlines and hate Notre Dame fail to realize…Notre Dame isn't just a "team". It's a PROGRAM. A well-oiled machine that continually recruits and develops players year in and year out. Heading into last season all we heard about what how Notre Dame wouldn't be able to move the ball. They lost Cole Kmet and Chase Claypool to the NFL. They were relying on a redshirt freshman running back and a true freshman running back and Tight End. Well that redshirt turned in over 1100 yards rushing and is now getting some Heisman attention and that freshman TE is regarded as one of the very best at his position in the country and a future first round pick.

The doubters and haters lack two things. Foresight and faith. There's an old quote you may have heard before

"Whatever you ask for in prayer, believe that you have received it and it will be yours"--Mark

"Mark who?" You ask. Mark as in one of our Lord and Savior's best friends. Well I am putting that devine wisdom into practice.

Notre Dame has received its quarterback. A veteran who nobody seems to respect. I do, though. You know why…all he did the last time he was a starter was lead the Wisconsin Badgers to a 10-2 record, a BigTen-West Championship, while leading the conference in completion percentage. Now, you give all that experience, smarts, underrated athleticism, and accuracy a chance to play-fake defenses into oblivion and find Michael Mayer over the middle, Lenzy and Austin out wide and over the top (both of those guys will be better than Javon was last year), Avery Davis in the slot, and Tyree and Williams out of the backfield and the haters will be looking at their feet sheepishly. Weapons at every position, and the ability to make quick decisions. Good luck to defenses preparing against a Tommy Rees offense when he decides to go full fuck you mode with Williams and Tyree on the field with Mayer, Lenzy, and Austin. Who do you cover? Let me tell you…whoever defenses decide to focus on…Coan will find the matchup problem.

Yes, the defense lost their best linebacker and defensive coordinator. They replaced Lea with the hottest name in coaching. The guy who turned down the full court press from LSU to come to Notre Dame. People will be hearing Marcus Freeman every off-season forever until he gets a head coaching job. They'll also be hearing about Kyle Hamilton as a 1st round pick and Foskey snapping QBs in half. They'll be different. They'll be physical. They'll be multiple. They'll be mean. Again…this is the mark of a program. Nobody sweats losses from other teams that routinely make the playoffs. Notre Dame is now in that category. Something nobody else on their schedule is.

It is a god damn shame what FSU has turned into. I miss Bobby Bowden. I miss having Notre Dame-FSU be billed as "the game of the century". I miss Free Shoes U being a villain and a game circled on the calendar years in advance. Traditionally, many top programs open their season with a cupcake game. Florida State is that for Notre Dame…W. 1-0

MAC schools shouldn't be on the schedule. Toledo gets to have their doors blown off and their entire athletic department paid for in the process, but I'd rather play power 5 schools only like ND did when I was a kid. The schedule is what it is an at this moment the Irish are getting a W. 2-0

It's nice to see little Purdue back on the schedule. Who would've thought that two years ago when Louisville tried to poach Jeff Brohm to return to his alma mater that the Boilermakers would be the CLEAR 3rd best team in the state of Indiana. Moore is gone. Brohm might be soon too. Purdue is the little engine that can't. W. 3-0

One of those games that will be treated like it is the Super Bowl for ND's opponent. Cincinnati wants to be the first Group of 5 team to make the playoffs and they can't do it without a win against ND. That's why those teams, and the Bearcats are no different this year, schedule a bye week before playing the Irish. Desmond Ridder is legit, but he hasn't had to play a road game against a team as good as Notre Dame. He hasn't had to play against a coach that has seen every rep he's ever taken. Love what Cincy has built, but this is a game that the big boys separate themselves. Marcus Freeman revenge game. W. 5-0

The Hokies are down. Beamer ball is dead. Michael Vick isn't walking through that door. Can't sleep on a game in Blacksburg though. ND knows that. They've been down there before and the boys were ready for Enter Sandman and I expect this game to look a lot like that game 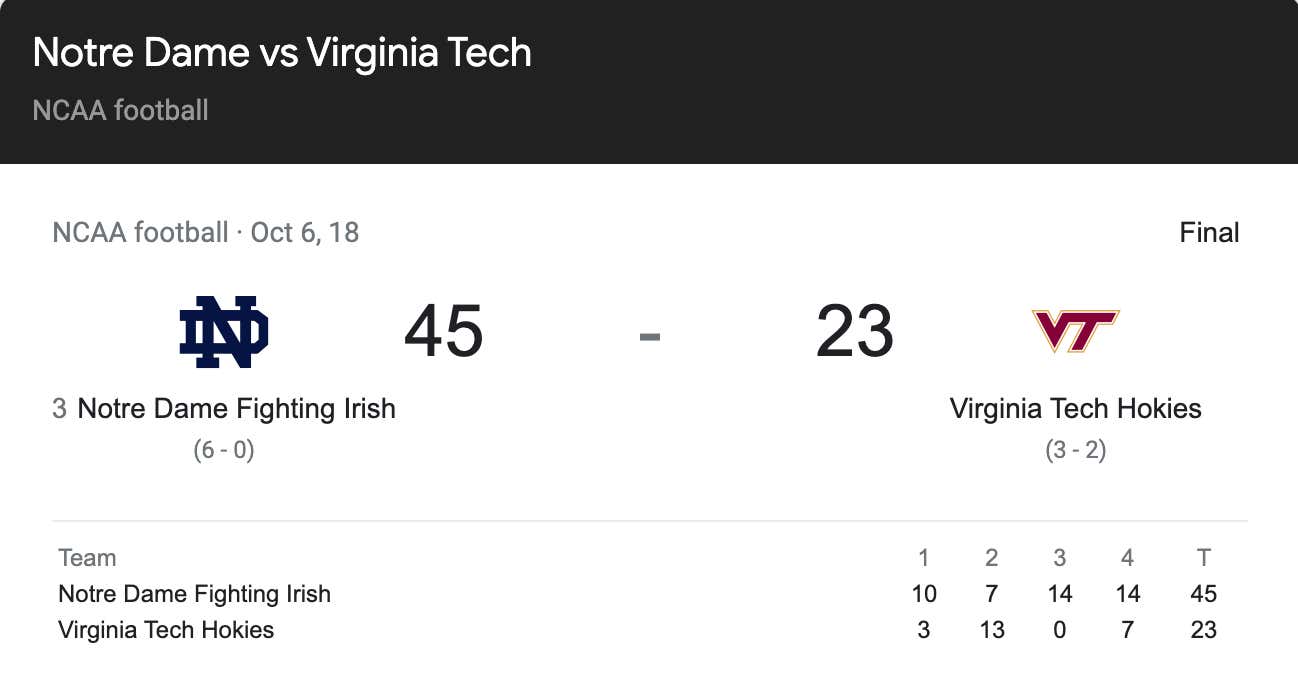 Slovis this. Back…that. USC isn't coming to South Bend under cold, grey, October skies and getting a win. There's no way some overhyped QB with a douchebag millennial name is beating the Irish. W. 7-0

I like Mack Brown, but the people racing to crown UNC as the next big thing in college football because they have a pretty good QB and a couple decent recruiting classes is absurd. They return almost all of the defense. They bring back their entire O-Line. I am sure they have some athletes to replace what they lost at skill positions. They're not ND. UNC always sort of does this. They build something in year one of a coach. Get the hype going in year 2. Backslide to mediocrity in year 3. Hire a new coach after year 4. This cycle is more predictable than the Mayan calendar. This will be game that UNC will probably try to turn into a track meet and they're going to get met with ND scoring drives that pound those candyass uniforms into the ground and burn an entire quarter off the clock. W. 8-0

Option teams are always a little scary. Always have to respect Navy, but Navy ain't what it used to be and eventually having actual scholarship players, and many of them, wins out. ND by two scores. W. 9-0

UVA is relevant in the ACC now. Good enough to be a Bowl team. Not good enough to avoid getting steam rolled by the Irish. Easy W. 10-0

Like I said about Navy…you always gotta be a little bit weary about teams that run the option. Unfortunately for GaTech they don't run that anymore. I don't know what they run now and that's because they're a doormat team. Style points game for Notre Dame. A game for Kyren Williams to push towards the Heisman. Easy W. 11-0

Historically this was a tough test for Notre Dame. On the road at the Farm to end the season cost Notre Dame a playoff spot in 2015. That was back when Stanford was still good though. This time around ND should be punching a ticket to the Orange or Cotton Bowl followed by a home game National Championship on Jan 10th in Indianapolis.

Congratulations to the true believers who made it this far…if you've come this far, here is something to go little bit further.