I have been the positive Mets fan around these parts for years, trying to inject any glimmer of light into the souls of Kevin Cuncel Clancy and Frank The Crank, no matter how much the Amazins prove to my they don't deserve it. But I am officially choosing violence and challenging every Mets position player who has picked up a bat this season to Rough N Rowdy (Which you can watch tonight for the low low price of 20 American dollars!).

I can't sit by and idly hope for better days as kids are crying on SNY. That violates the super secret parental oath I took when my kids were born. I have to fight for that kid's happiness because one day my kids will be like him, sitting at games with their happiness being decided how well 25 strangers hit and throw a baseball.

All that poor kid has known in his baseball life is sadness. There is no chance he remembers the magical run of 2015 before everything crashed into a wall of #contact in the World Series. Instead he probably associates his favorite team with losing games 3-2 every other night because an offense that looks good on paper looked like shit on the field and couldn't knock in a small country's worth of runners in scoring position. I know Pete Alonso says Mets fans should smile because we get to watch baseball. But when the results of those baseball games is the same terrible result every night, this is what those smiles become. 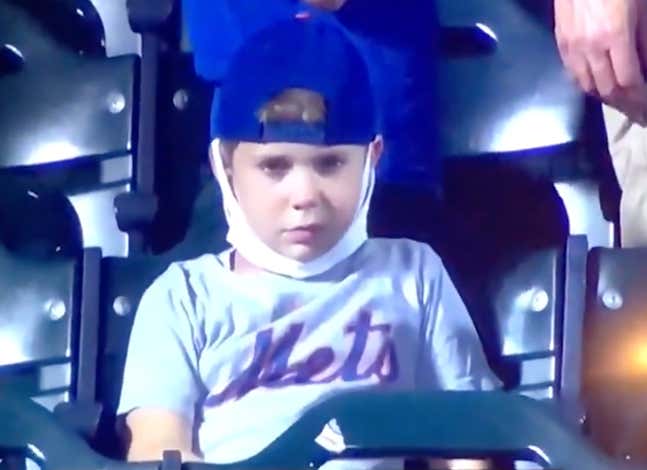 The fucked up thing is that Pete is one of the few offensive players who I can't actually get mad at since he has been carrying this corpse of an offense pretty much by himself since the All-Star break. But if Pete wants us to relax and smile, he needs the other guys to follow his lead and start smashing the fuck out of baseballs once they are released from their cells because this shit isn't going to cut it.

So this challenge goes out to all the Mets position players not named Pete Alonso (or Brandon Nimmo, or Jonathan Villar but mostly Pete because he's strong as fuck). Meet me in West Virginia tonight for 3 rounds of hell in the middle of the squared circle with NO HEADGEAR. Don't worry about your day job either, I imagine the team won't even notice you are missing from the lineup. Now instead of hanging out in NYC on a Friday night, this is who you are going to be surrounded by.

Okay, that was enough negativity for the morning since we get enough starting at 7:10 every night. Like Gary said, things will get better. I think. I hope. I believe.

Speaking of believing, we talked about what needs to happen for things to get better on this week's We Gotta believe now that this California gauntlet nightmare is over, Luis Rojas' fate now that the fanbase is chanting for him to get fired, and if Sandy will be a part of fixing everything.

CLICK HERE TO LISTEN/SUBSCRIBE ON YOUR FAVORITE PODCAST PLATFORM