Congratulations, you're having an orphan! 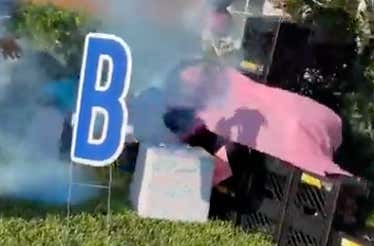 I don't know how we reached this point of the simulation that we are living in, but I think it's time to unplug us for good after seeing this unholy union of viral video genres. Don't get me wrong, I loooooove this video as one of the few people that enjoys gender reveals because they are easy blogs that usually result in both the revelation of a new life and the end of an old life.

However, the thought of the amount of copycat milk crate gender reveals that are going to come out after this brilliantly produced, almost definitely fake video hits a zillion views sends a shudder down my spine as a member of #TeamHuman. This entire time, I thought the robotic army that those assholes at Boston Dynamics was going to be the end of mankind.

Instead, it's going to be the rudimentary invention of the milk crate that used to bring us all so much joy as it delivered chocolate milk to our class rooms in elementary school. Now I know what Ray felt like in Ghostbusters as he watched his beloved Stay Puft Marshmallow Man arrive to destroy the world. An unshakable combination of sadness, dread, and nostalgia to go along with bewilderment that this all is actually unfolding right in front of my eyes. I never in a million years could have guessed this would be the champion of the apocalypse, yet here we are.

Actually when you think about it, creating the milk crate challenge may have been the perfect strategy for the machines to take down humanity. Not through activating the countless nuclear arsenals we created or declaring a war straight out of a Terminator movie. But by allowing us to pick ourselves off one by one all in the name of getting views on the series of tubes we call the internet run by said machines. Well played, robots. Well played indeed.