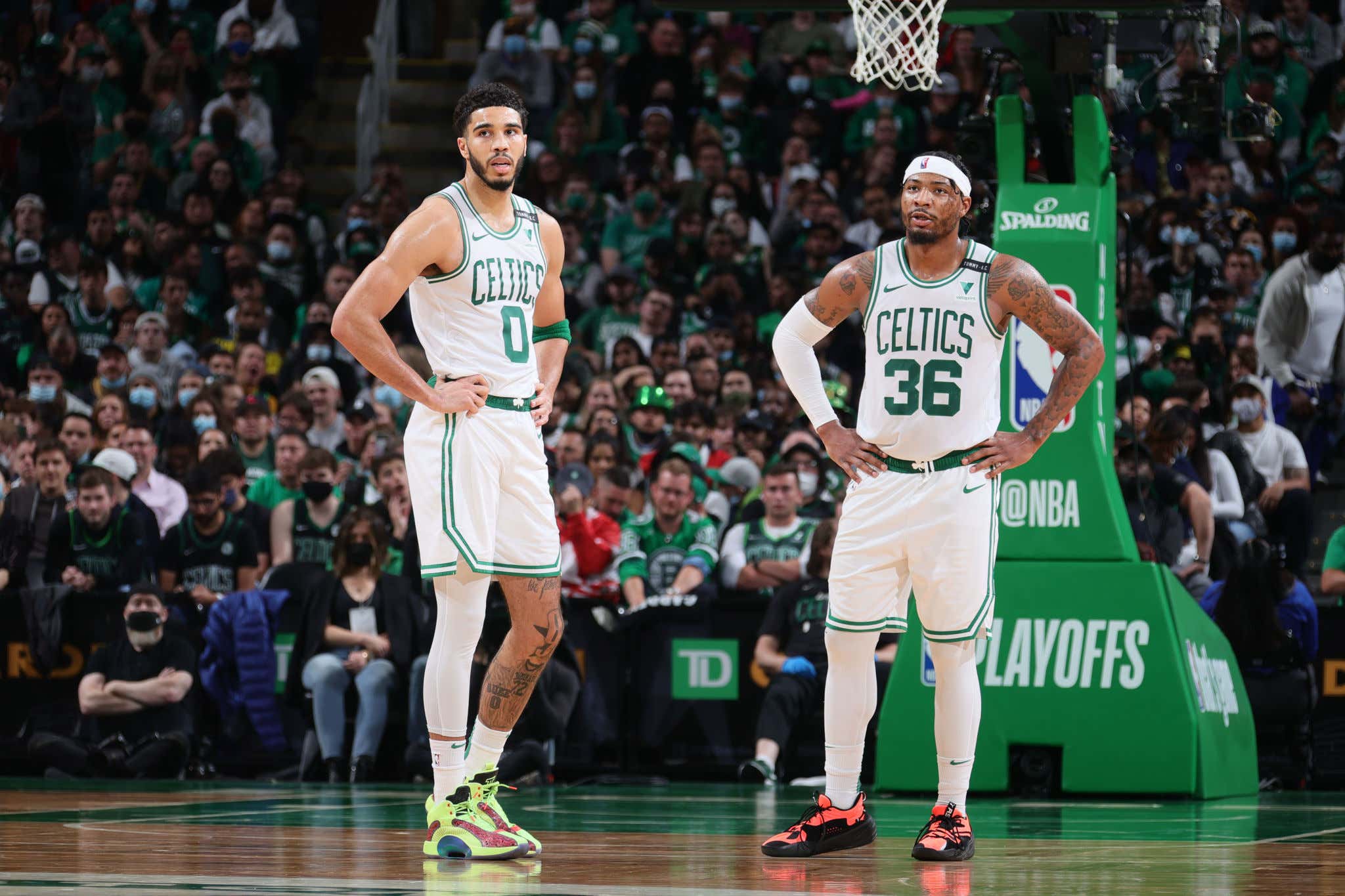 Now that free agency is mostly over, I think we can all agree that for the most part we have a good idea of what the Celts roster will look like. Maybe there are some end of the bench adjustments in the coming weeks, but the important pieces are in place. That means the next step is trying to predict what first time head coach Ime Udoka is going to do both in terms of the starting five as well as his rotations. We know for sure who 3 of the 5 guys are going to be, but those last two spots are certainly up for debate. Depending on who you ask, you could go a variety of ways each with their own set of positives and negatives. It really just depends on the style that Ime wants to play, and all he's suggested so far is a team with some actual balls who consistently shares the basketball.

So because this is how I spend a majority of my time, I've been thinking a lot about this these last few days. You might think that's a waste of time, well I think you're a waste of time. Boom roasted. This is what I live for. So in looking at different things this week, I threw out this tweet

Now I'll admit, typing the words "2 Bigs" gave me severe PTSD, especially since the two big experiment was for the most part a complete disaster last season with Theis/Thompson. But it wasn't always that way which I wanted to point out the last time Horford was on this team. It's not my ideal choice, but it wouldn't surprise me. Mostly because both Brad and Ime talk about doing everything they can to maximize the Jays. Well, adding two solid P&R options who are both very good passing big men can certainly help in that area. It's not perfect, you really are taking a leap of faith that Horford or Rob could guard quicker 4s, which I don't exactly love. Part of me thinks maybe it becomes matchup dependent, with only Smart/Jaylen/Tatum as the ones who are starters no matter what.

If you were to ask me what my preference would be, personally it's something like this

Here's my rationale. Ime just said yesterday the plan is to have the ball in Smart's hands more. He's the starting point guard, period. Sliding Tatum to the 4 allows them to check off the box of guarding smaller 4s, and we've seen their offense flourish when they play just one big. You have Rob in as the P&R/lob threat as well as a guy who is a good perimeter passer which in theory enhances the Jays. All the successful offensive lineups we saw last year had Rob playing with the Jays. I truly think that's the move. To go more along those lines, starting someone like Nesmith (if his summer shooting proves to be legit), helps create space for everyone involved. Have him camp out in the corner and be a consistent outside threat. Remember, he finished the year shooting 37% from three and over 45% from three over the last month of the season. This combination gives you spacing, versatility, and allows you to have your best players on the floor together.

which in my opinion maximizes everyone's skillset. You have Schroder with the ball in his hands more which is his best role, Pritchard is off ball which is his best role. When it comes to Horford, the question is mostly if he's cool coming off the bench. I think you can still limit Rob's minutes while having him start, so I don't see why not. Maybe you have an early sub so Horford can play with the starting group for stretches, I think that solves the issue.

I simply do not understand this way of thinking. First off, this takes the ball out of Smart's hands which is exactly the role you shouldn't want. It has him fill the off ball shooter role, which is not where he's best used. You want him as the primary ball handler/playmaker. Well that would mean you then have Schroder off ball, something he stinks at as well. He's too inconsistent of a shooter for that. He's at his best with then ball in his hands, which is why he's best suited to run the second unit. Having two starting guards with spotty outside shooting is only going to clog things up for both Tatum and Brown, and doesn't really maximize things for them which is supposed to be the whole point. My brain broke a little bit when I saw that.

There are some who might argue the move is to start Josh Richardson at the 2/3, but I don't love that idea either for the starting group simply due to spacing. Like Smart and Schroder, he is not a good off ball shooter. Yes he gives you versatility and might be a more proven player than Nesmith, but I think Nesmith's skillset is more valuable to maximizing the rest of the starters. He creates space for others simply because defenses have to respect his outside shot.

I do think there is something to be said about having things be matchup dependent. There's no need to go the 2 big route if you're playing a team that primarily plays small, like the Heat. I'd much rather go Tatum at the 4 in that matchup. But there are matchups where I think we've learned not having size to start games definitely hurts. That's where I think we'll see Horford/Rob together.

What I do hope we see from the Ime era that's different from the Brad era is not sticking with something just to stick with it. If a combination or rotation order doesn't work, don't do it. It felt like Brad got a little stubborn at times for whatever reason. Maybe it was to keep vets happy, who knows. Even when both the eye test and the metrics suggested something wasn't working, he was a tad slow to adjust. I really want to see how Ime reacts to those situations.

So I'll ask you. What would your preferred starting 5 be? Do you think it matters or are you cool with having things be fluid outside of Smart/Tatum/Brown? How much more does continuity matter of matchup? It's going to be fascinating to see how it all plays out.