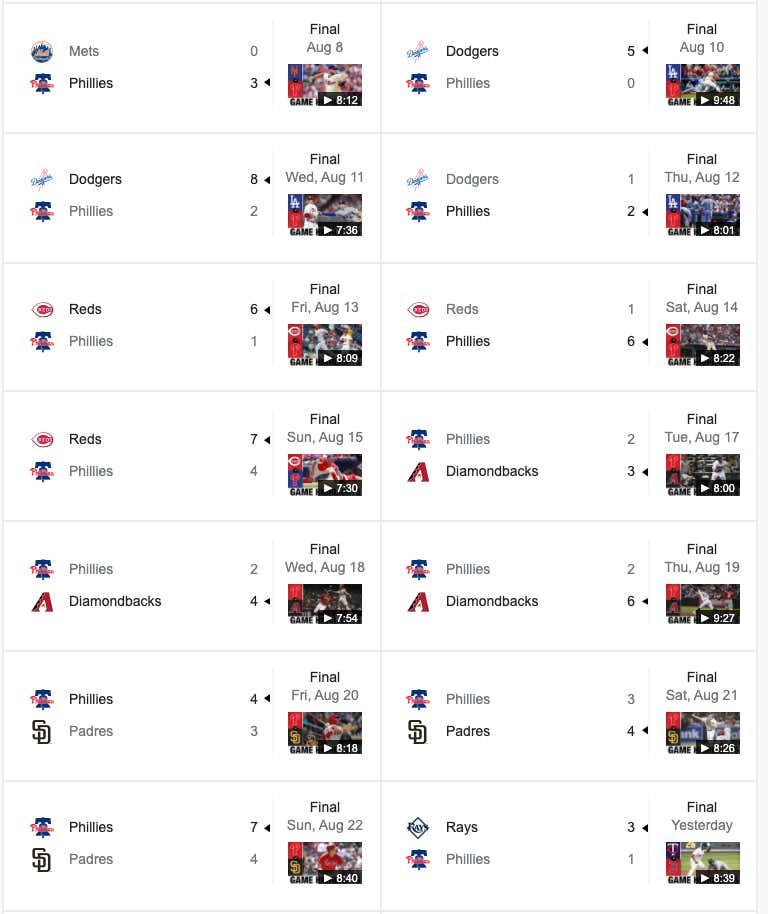 Remember that 8 game winning streak which allowed the Phillies to go up multiple games in the NL East? That was cute. Since then? Dick in hand. 4-9 since with of course going 1-7 in those games where they scored 2 or less. Last night vs the Rays the Phillies mustered 1 run on 6 hits. 1 run. 6 hits. That includes the gem of an 8th inning where Archie Bradley gave up a lead off single, banged Randy Arozarera with a pitch after a 0-2 count, and let Nelson Cruz absolutely scorch a single which turned into 2 bases because Odubel Herrara refuses to be an actual baseball player on a regular basis. Down 2 runs in the bottom the Phillies at least had some hope with the top of the order up, right? Wrong. The Rays struck out Herrara, Segura, and Harper on, wait for it, 10 DAMN PITCHES!!! A Bryce foul ball was the only thing that kept it from an Immaculate Inning. Incredibly incompetent on all fronts.

OK. You want to keep Rhys healthy to be able to play for the rest of the year. Fine. However, I wouldn't have an argument for the rest if it wasn't AFTER a day off already and Girardi already said Hoskins was going to be playing today vs. a LHP. I don't get it. I really don't.

And there you have it. At least the Braves finally lost a few and, even better, Dombrowski is realizing the faults of this franchise and is finally taking action:

Oh, you mean to tell me the scouting and player development departments for the Phillies have been absolute dog piss for close to a decade now? Fancy that. Look no further than Rhys Hoskins and Aaron Nola being really the only "reliable" regulars on this roster that have been homegrown. Sure, you can throw a few others like Ranger Suarez, Zach Efflin, JD Hammer and maybe, maybe Odubel and Hector in that boat, too. Kind of. But at best that's only half a dozen meh to at times above average talents that have been developed through the Phillies farm system.

Whatever. Rone and I talk this happy horse shit, Eagles props, and more on this week's First Time, Long Time. We'll hang up and listen.