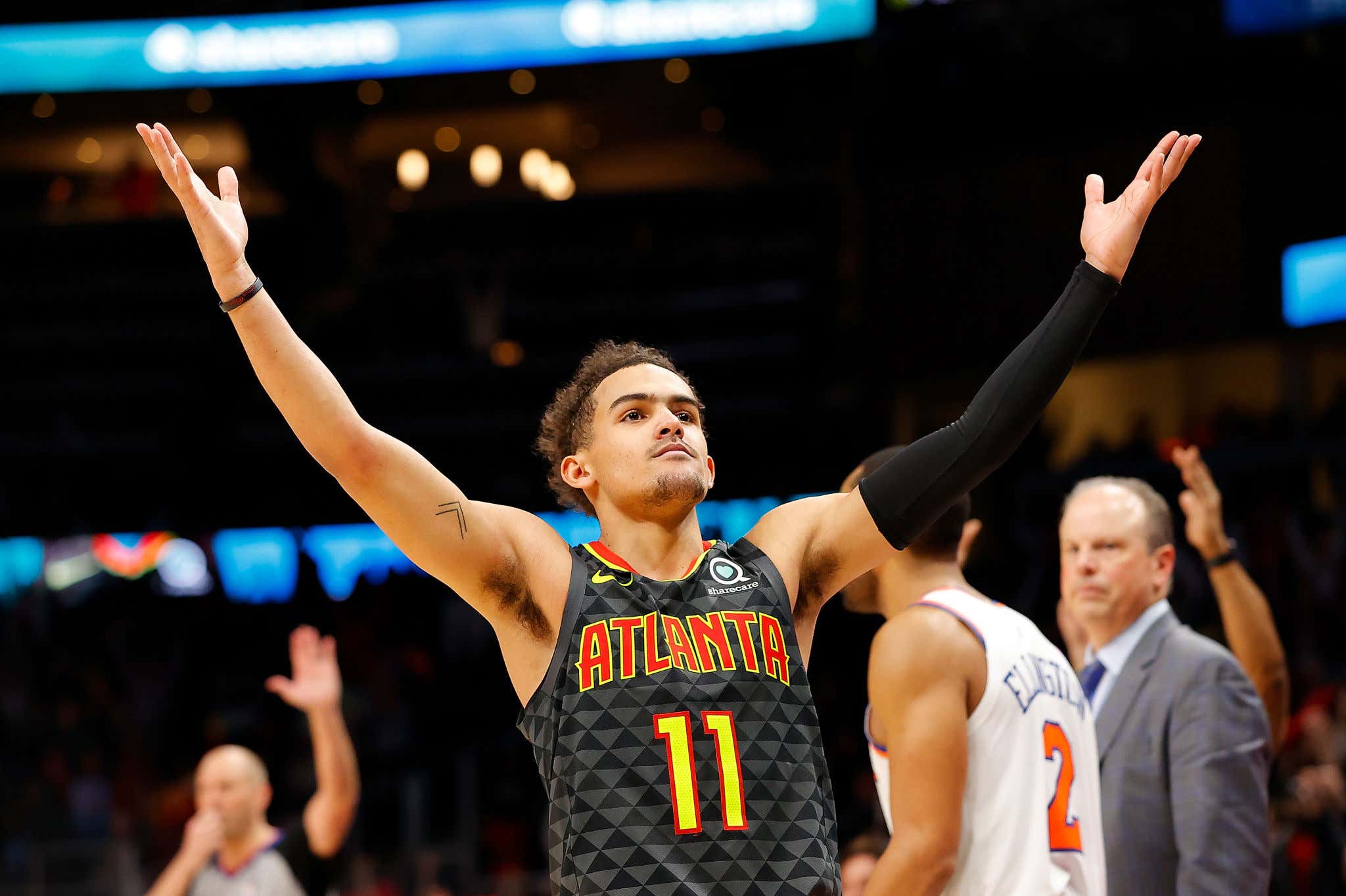 Easily the closes poll we've had so far, I like that the Hawks pulled this out because there's no denying they were one of the more exciting teams in all of 2020-21. When you talk about the Hawks, you really have to start with the fact that there were two separate teams last year. There was pre-Nate McMillan, when the Hawks were 14-20 and in the 11th spot in the East, and then there was post-Nate McMillan that ended the season with a 27-11 record and a deep playoff run. Since he took over on March 1st, the Hawks had the 8th best offense, 12th best defense, and 7th best net rating in the entire league. Their 27 wins were tied for the 2nd most out of any team in the league, trailing only the Nuggets and Suns (29-10). So as we enter the 2021-22 season, it's important to remember what version of the Hawks we're seeing. The big question heading into the year is can they still be as effective now that there are real expectations for their success. We've seen this happen to teams previously in NBA history. You have that one surprise year where you're really good and have deep playoff success, and with that comes new expectations. You ask around I bet you there are a lot of fans who might still think the Hawks run was a fluke, while others declare this is a team ready to be top 3 in the East. The beauty is we get to find out just how for real they are. The talent is there, they've shown the ability to perform at a high level, but now with better health surrounding them in terms of other teams in the East, it'll be fascinating to see how they stack up.

First and foremost, we begin by looking at their roster as things stand today 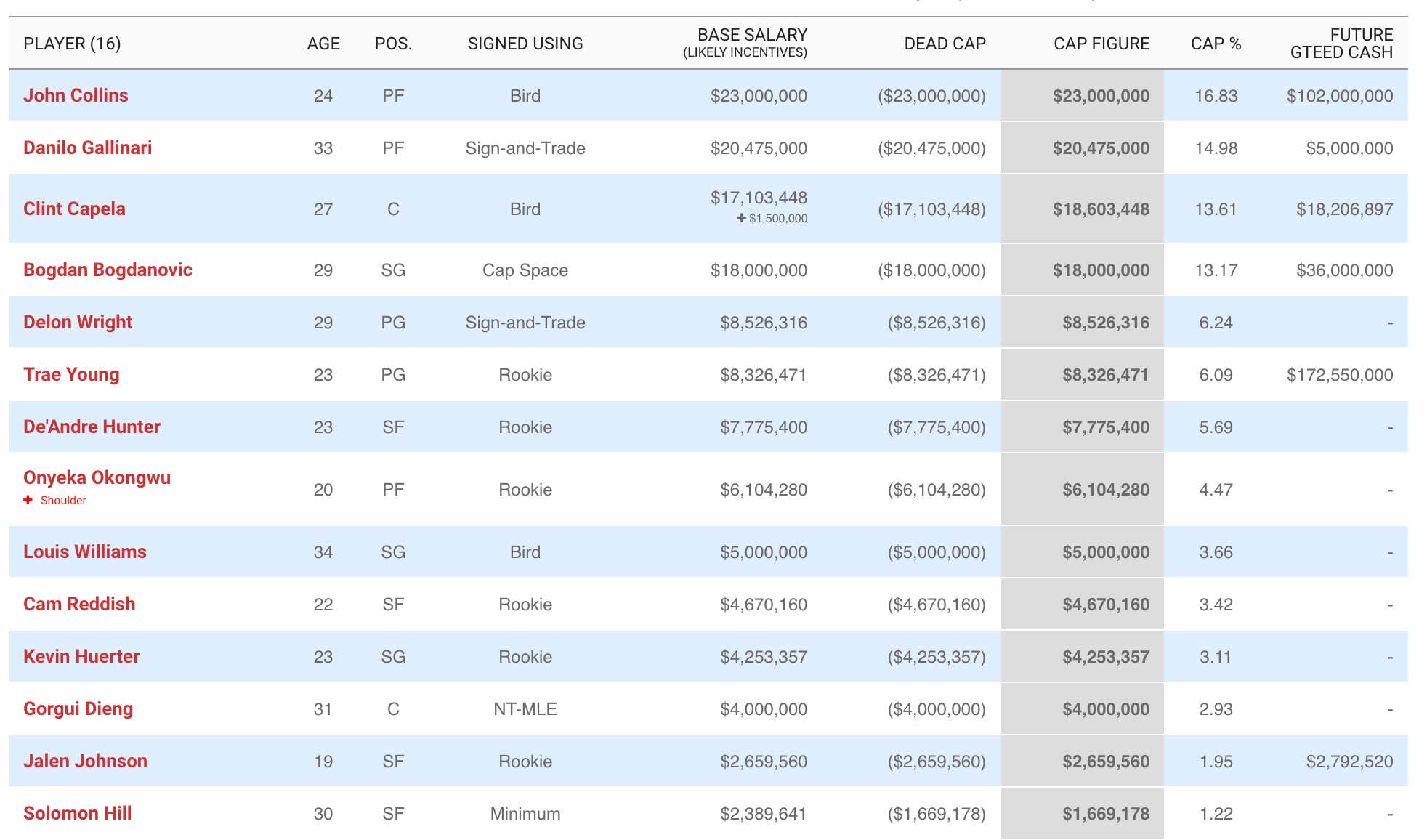 the initial takeaway you should have is this roster is deeeeeeeeeep. At $133,063,170 this is the 13th most expensive roster in the league. I mean they have legit guys are nearly every spot. Even their young guys who might not play that much are loaded with potential. To give you an idea of just how lethal this roster can be when healthy, all you have to do is look at how the lineups with their best players performed. For me, that's is broken up into two groups

Those are pretty staggering numbers. It's no secret that once Bogy came back form injury in early March that his return combined with the coaching change really shifted the trajectory of this team. But you also go down the list and there's solid depth everywhere. Guys like Gallo, Lou Will, Delon Wright, and Gorgui Dieng are all solid vets. Then you mix in some young guys with potential like Okongwu, Jalen Johnson, and Cam Reddish and this is easily one of the most complete rosters on paper in the entire East if they remain healthy. When you look at it this way, you see why people might be hyped about the Hawks. But there are also some areas of concern. For example, they were just 15-21 against teams .500 or better, which isn't exactly great. That was fewer than all the teams that made the top 3 and tied them with the Knicks, who were another young, overachieving team last season that finished with the same record (41-31). If you look at how they performed against the top 4 teams in the East it broke down as follows

Obviously, we saw what they did to the Knicks and Sixers in the playoffs so maybe that doesn't matter, but Brooklyn is only getting healthier and the Bucks are the defending champs after taking down the Hawks this summer. The question is how much of the Hawks success was real and sustainable, and how much of their postseason run was due to simply taking advantage of the opportunity that was in front of them. If Ben Simmons isn't afraid to dunk the basketball or the Sixers don't repeatedly puke of themselves, is their outlook for next season different? At the same time they deserve credit for going on the road and taking care of business. That sort of mental toughness is crucial for a young team to win in the NBA, and it certainly helps that their best player is a bonafide monster.

The narrative needs to change when it comes to Trae Young. It just does, and someone has to say it. Give the man the respect he deserves. He gets snubbed for All Stars or All NBA, and all he does is dominate your favorite team

By my calculations, he's firmly planted himself in the top 5 point guard conversation. Everything you've wanted to see from him he's done. Regular season production, coming through in huge moments, playoff success, proving he can be the best player on the floor no matter what other stars are playing, winning huge games on the road, he's done it all. Yes there are flaws defensively due to his size, but so fucking what. Almost every player has flaws.

What makes the Hawks such a problem to handle is the fact that it's pretty much a pick your poison situation. Once Trae Young knows he has you, it's up to him to decide how he wants to slice you up. Isolation? OK, no problem. Trae ranked in the 83rd percentile in isolation basketball last year. He scored on 48.8% of his isolation plays which is an insane number. You want to take that away it's no problem, the Hawks can just go to the P&R. Either Trae is going to carve up any sort of drop coverage with his floater, or he can go to either of his elite rim running bigs. John Collins finished in the 73rd percentile as a roll guy and Capela in the 70th. The lob threat to either of those guys is a real weapon.

But it gets scarier. With so much attention on Trae, that allows their shooters to thrive. Someone like Bogdan Bogdanovic was one of the deadliest spot up shooters in the entire league last year. He finished in the 93rd percentile as a spot up shooter. Kevin Huerter can light it up as well. Gallo finished in the 88th percentile. The list goes on and on. Shit, even their reserve big in Gorgui Dieng can knock down threes (42% last season). Jalen Johnson looks like someone that can step in and contribute right away as well.

For this team to truly show they are ready to compete with the best of the best, the improvement has to continue to develop on the defensive end. They gave up way too many points last year (111.4) which was actually worse than terrible defenses like the Pistons and Celts. That was around play-in level compared to other teams in the conference. That number trimmed slightly once McMillian took over (109.8), which was the 5th fewest in the East over that span. Here's the difference in this season though. Now the Hawks are becoming the hunted. They aren't catching anyone by surprise this time around, and they're going to be getting other team's best effort. That's what happens when you start to win, other teams take you more seriously. This is something the Knicks are also going to have to deal with next year.

One thing to monitor as well with this team is given their depth and the timeline of these young players, the Hawks could absolutely be in the trade market come the deadline to add a missing piece given what they might need at the time. This is especially true if someone like Cam Reddish continues to develop. They probably aren't paying everyone moving forward, and after committing to John Collins, someone is most likely going to be on the move that should bring back a good player.

But when you think of the ingredients that go into making a team a contender, it's hard to argue the Hawks don't have a whole lot of em. Elite high end talent? Check. Depth at every position? Check. A good mix of vets and young players? Check. Young players with promise who should only improve? Check. Good coach? Check. Good front office? Check. Something to prove? Check. Just take a step back and look at their situation objectively and you see why there is a lot to like. They just have to now back up what they did last year to show that it's truly for real, and not just a weird run that was due to injuries/opportunity.

For me, I see a team that should absolutely be in the conversation for the 4/5 spot again, and could potentially go even higher should any of the top 3 teams have injuries. I think they're as for real as you can be for a team at this stage of their development, but regression is certainly possible.