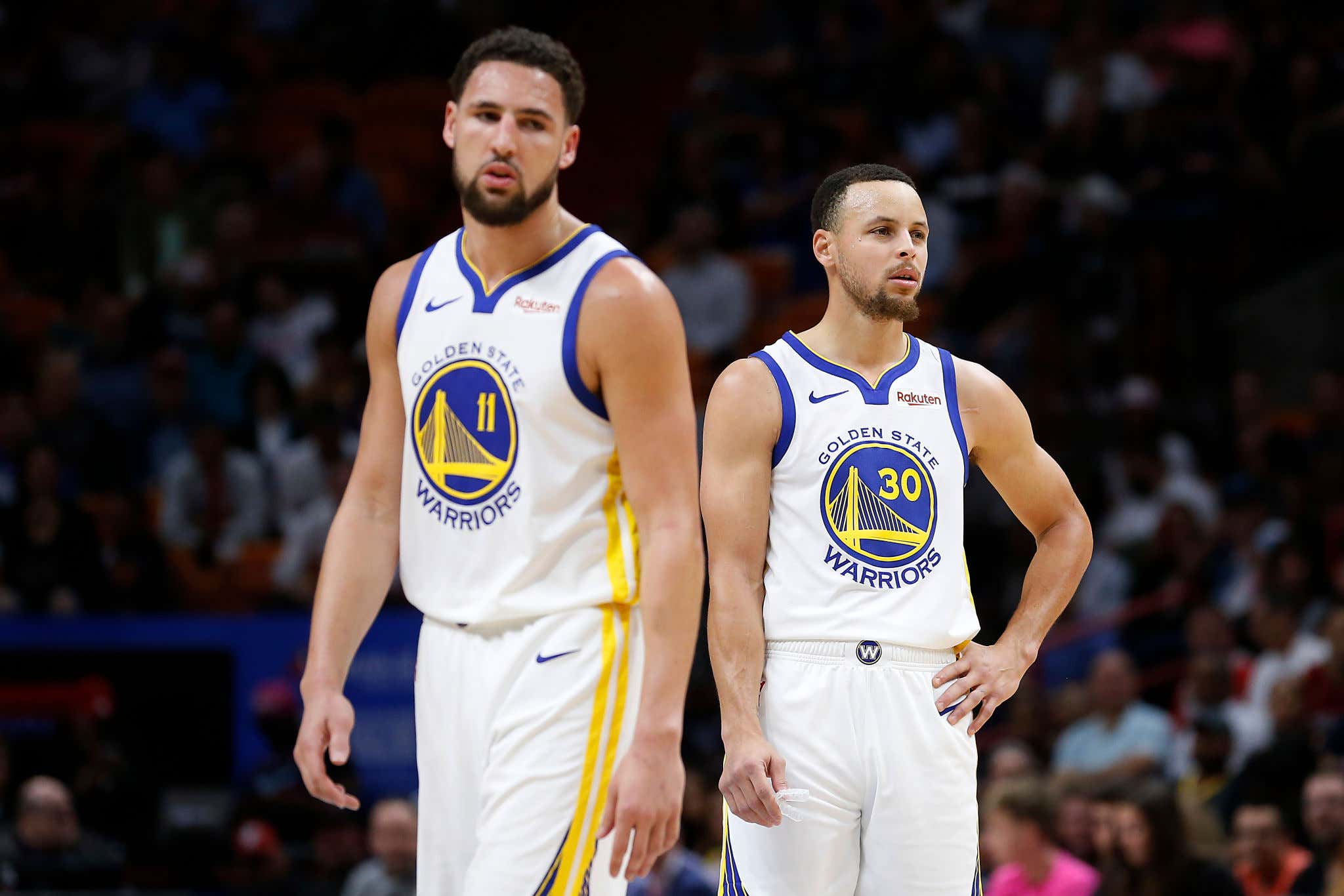 Well, I can't exactly say the results of this poll are all that surprising. I think most people are eager to see the Warriors back at full strength after the two year's they've just had. Injuries really do stink out loud. At the same time, we're also seeing a version of Steph Curry that is playing some of the best basketball of his career and is very much still a must watch status type player. The Warriors are a great example of just how quick things can change in the league when you have to play through some pretty brutal injury luck. In 2018-19 they won 57 games and were in the Finals. In the next two years combined, they've won 54 (in 83 games). When you add in the influx this year of young promising talent, there's a lot of reasons to be excited as a Warriors fan again. There's no denying that before the Warriors became a dynasty and every fanbase hated them because they destroyed their favorite team, staying up late to watch Warriors games and Steph going nuts was a whole lot of fun. Seeing as how he's not showing any signs of slowing down, I imagine that will continue. Now, before we can look ahead, let's first relive some of the Warriors best moments from last season

Not bad for a team that didn't make the playoffs! So here's the thing when it comes to the Warriors. Given the elite talent of their top 3, it's totally understandable to think that with better help, this team will get back to being a problem on a nightly basis. You have to remember though, Klay probably won't be back until around Christmas. That's at least 33 games of their 82 game season. That's a big deal obviously, especially with how competitive the West is. It's not like they are starting the season at full strength ready to roll. Things could be a little murky there for a while, especially starting around mid November to Christmas. They have BKN, PHI x2, POR x2, NYK, BOS, PHX x3 all over that span. Then once they get past Christmas, even with Klay back they immediately go DEN/DEN/UTA/MIA/DAL as he gets back into shape. As it stands today, let's have a look at their roster 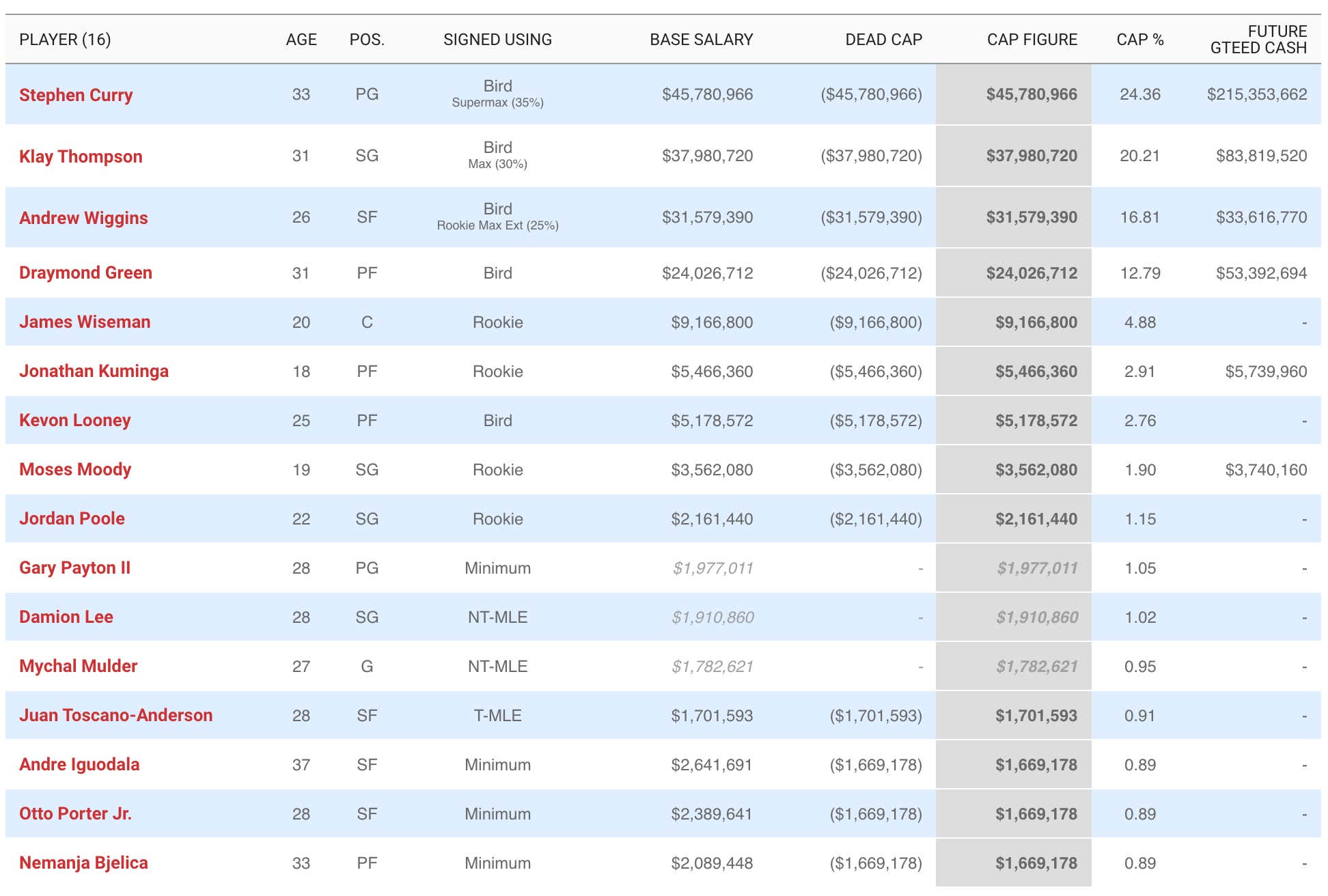 This is where the concern should be. There's a whole bunch of young/unproven talent on this roster that could be heavily relied upon to start this season. Sure Iggy is back, but what is he realistically going to give you? If Otto Porter Jr can't figure things out in this offense playing next to Steph, he probably never will. You hope that Wiseman would look better in his Year 2, but I think we can still put that as an unknown at the moment. This is why people have to be careful when talking about how the Warriors of old are back now that Klay will be healthy. The difference is mostly in the other guys on the roster. Those dynasty teams were much deeper with proven NBA talent. It's a lot of pressure to put on guys like Moody and Kuminga to step in right away and be contributors seeing as how they've never even played in the NBA before. Despite their roster being made of mostly young guys, the Warriors still have the most expensive roster in the NBA, coming in at $177,282,659 and that doesn't even factor in Steph's new extension yet. It's a weird position to be in. Your checkbook says you should be competing for titles, you have the elite high end talent to do that, but there's no guarantee that with how much the West is improving, that we won't see the Warriors continue to fight for their playoff lives while Klay rehabs.

The other side of this argument is the fact that last year, even with the injuries, the Warriors were already competing for a playoff spot. Andrew Wiggins took the leap defensively and is actually not a gigantic negative on that end, Steph is gonna steph and guys like Jordan Poole, Juan Toscano-Anderson and Damion Lee all had moments. One would think that they would improve with more experience, so a team that was fighting for a play in spot without Klay, could very well be competing for a higher seed once he's back. Remember, the West was all crammed together last year. The difference from the 5 seed to the 9 seed was 3 wins. If the Warriors young guys can show any sort of improvement to the point where they don't just lose every game Steph doesn't play in, why couldn't they be in the mix? Especially with the Clippers now having to play without Kawhi, you would think they drop. Maybe we see some regression from POR as well. I don't think it's insane to think that perhaps the Warriors could float around that 4-5 seed until Christmas and then make a run for a top 3 seed with a healthy Klay.

Even with their struggles last year, the Warriors still had a top 5 defense in the NBA. That shouldn't really change all that much if healthy. Where they need to improve though is on the offensive end. It feels weird to type, but this was only the 20th best offense last year and that was WITH Steph having one of the most insane seasons of his career. That has to get a whole lot better, and really it comes down to if the young guys can make a leap. What sort of improvement are they going to get from "the others" so Steph doesn't have to have an insane usage rate at his age. His 34.8% USG% laSt year was the highest of his career. While he appears to be superhuman, he is getting older. That's why many people thought they would package their assets at the draft and bring in another supporting piece, but they didn't. Instead they went with the youth movement and are basically crossing their fingers for internal improvement unless something drastically changes over the next two months. I suppose a Ben Simmons trade is always a possibility, but that's really it.

Their issue last year in part was the fact that they at times had their issues shooting the basketball. I know, that sounds really weird when talking about a Steph Curry team. But as a whole, the Warriors ranked in the 20th percentile in spot up shooting, finishing the year at just 38%. I do wonder if the version of Wiggins we just watched (47/38%) is now who he is, or if that regresses. If it does, that could be a problem if the Moody/Kuminga's of the world aren't ready right away. I'm just thinking of how they create space offensively. If Otto Porter's jumper isn't fixed, who do they start at the 3? Kuminga? Are we sure his shot is consistent enough? He did only shoot 27% from three in Summer League for what that's worth.

For me, I think their formula is pretty simple. First and foremost, give the ball to Steph and get out of the way. Once you do that, hunker down defensively and the rest should fall into place. Remember, the Warriors were 37-26 in games Steph played in. If you take that winning percentage and put it to an 82 game season, that's 48 wins. You look up their win total projection, guess what number you're seeing the Warriors enter the season at.