Okay, everyone at once get the joke off. Of course there wasn't a true fight because it's soccer. Beat you to it. Oh, second reason was of course because it was in France. 2-for-2. But back to this. What the fuck are we doing here people? Stop throwing shit at professional athletes. I don't care what country we're in or what sport we're talking about, just stop launching things at people. This was the case at Nice today when someone threw a bottle and hit Dimitri Payet for Marsielle. I know European soccer fans are insane and all, but how do we escalate to this? I've been to hundreds of sporting events in my life (nbd) and I can surely say I've never once thought about rushing the field to fight a player. That includes watching Tim Tebow and Tennessee and Louisville. I didn't even throw something at one of them.

Now back to this specific brouhaha since it's not a brawl. LOVE the move at the 21 second mark when he just LAUNCHES the ball back to the stands. Someone is catching a ball to the face and it's their fault. Dude evaded being held back and just sent one to the crowd. Use any advantage you have when you can. 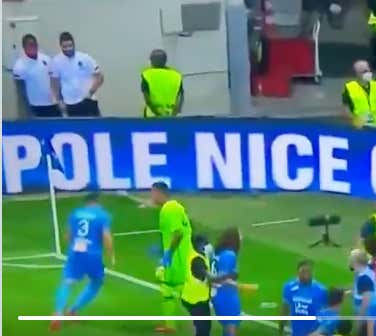 Then there's this guy going down like a sack of potatoes.

Has this dude ever been shoved his entire life? That was one of the most harmless shoves I've ever seen and buddy boy went down to the ground like he ran into Ronnie after a fight with Sammi Sweetheart.

I almost, ALMOST want to give a little credit to security here too. They were pretty quick in at least getting numbers. Shocked they just didn't let it happen or even join in. Again it's European soccer we're talking about here. Shit is always off the rails. I can't believe Messi decided to play in this league when he could have joined the MLS or Tottenham. Might as well play for Arsenal at this point.

Oh and if these fans couldn't be dumber, they are winning 1-0! Way to kill the momentum, morons.