Source - A yoga instructor has gone viral after she was attacked by an iguana in the middle of her routine.

Twitter user @bahamahoopyogi was stretching with her back arched against a scenic backdrop of a golden beach and picturesque weather. Over three million people have watched the hilarious video, which shows the yoga instructor’s panic as she realises the creature has latched to her body and drawn blood.

The relaxing scene turns chaotic and she can be heard shouting: "Ow! He bit my f****** finger!"

At least she got the shot, right? She was probably going for a couple hundred likes and ended up with three million views. I'll call that win. Having said that, why get off the boat in the first place? Did she not see the beach literally teeming with lizards? I'm not coming within a hundred miles of those things whether they're venomous or not.

From the Daily Star...

The creatures, which mainly live in Central and South America and the Caribbean, have “exceptionally sharp teeth” that can cause “serious cuts”, according to experts.

Pet website The Pet Enthusiast says: "An iguana bite is not poisonous or venomous, but it can do serious damage.

"Iguanas have atrophied venom glands that produce only a very weak and harmless venom. Their bites can cause serious injuries to the fingers, ankles, wrists, and face." It goes on to say that anyone bitten by an iguana is recommended get medical treatment and complete a course of antibiotics.

God forbid it bit down on her wrist and didn't let go she would've bled out. Credit to her for laughing it off but still, I would be terrified. All she did was throw sand… 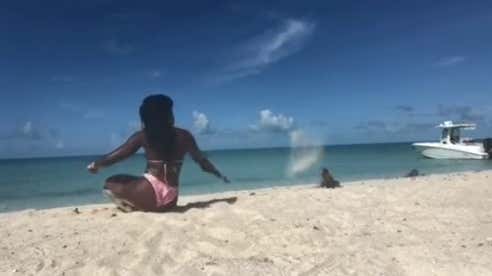 She honestly should've ran the thing down and killed it just to set an example for the other lizards. Humans are off limits, dudes. (I'm blogging directly to the animals right now.) We are the apex predators of the world. Don't forget that. We're scared of everything but when push comes to shove, we win. Always have, always will. Have a wonderful night, friends.