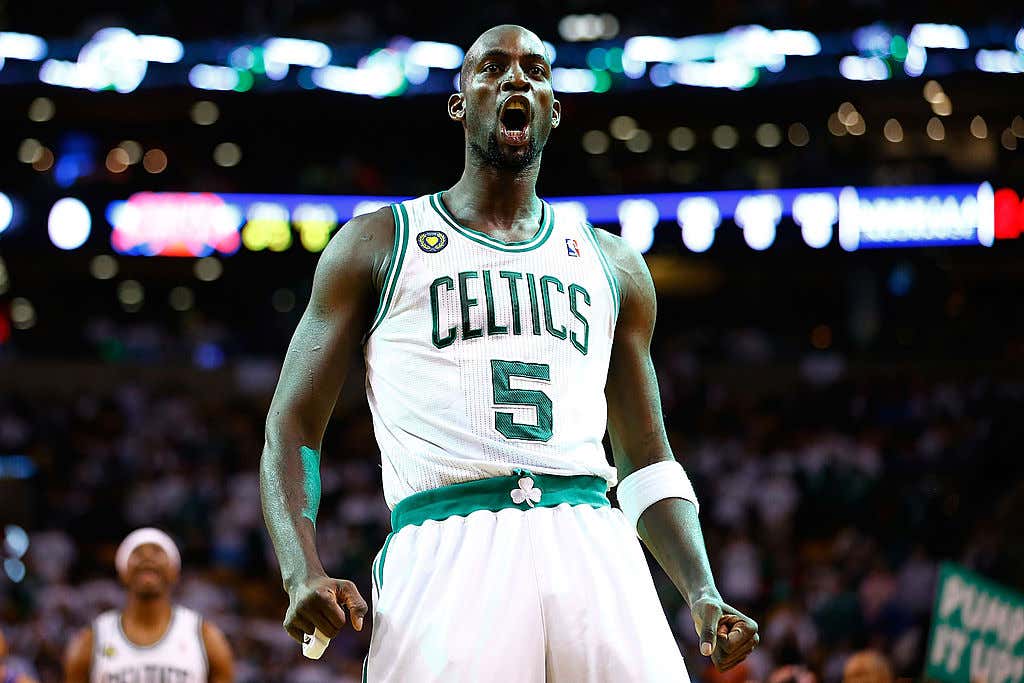 As you may have seen, today is Schedule Day across the NBA. Everyone is currently doing the same thing where magically you look at the schedule only to see your favorite team is going to get off to a 10-0 start. While that's all fine and good, for us Celts fans there was another important announcement in terms of their schedule, and that's KG's jersey retirement day. So go ahead and mark your calendars, start saving up money for what I'm sure will be a pricey ticket, because on March 13th we'll all get to see KG become the 23rd number to hit the rafters (plus LOSCY). It's without a doubt going to be an emotional night, I think we all remember what it was like to watch Pierce's number go up. What a moment that was to experience

For a lot of us, Pierce and KG are the guys we finally get to see hit the rafters from our generation. Sure Bird went up in 1993, McHale in 1994 and Cedric Maxwell in 2003, but those guys were from an era that existed before a majority of us were even alive. That's what made Pierce's ceremony so emotional for me personally and I have no doubt KG's will do the same. I had to spend my whole life looking up at those rafters and hearing Papa Greenie tell me there would never be another player good enough to join those legends. Watching this team in the 90s and early 2000s, you couldn't fault him for thinking that. But then Pierce arrived and became our guy. Our generation's Larry Bird. Then from the heavens above, KG arrived and changed everything. He helped bring us the only title many of us have seen with our own eyes.

I will say this though, the fact that the Celts got demolished on Pierce's night kinda stunk. Not the best idea in hindsight to do that on a night when LeBron is in town, and now here we are again with another potential risk. You just know Luka is going to do Luka shit that night. There's a very real chance he ruins the festivities the same way LeBron did. But let's not worry about that right now.

Let's instead focus on what will be an awesome night where we get to celebrate a Celtics legend heading up to the rafters for the rest of eternity.