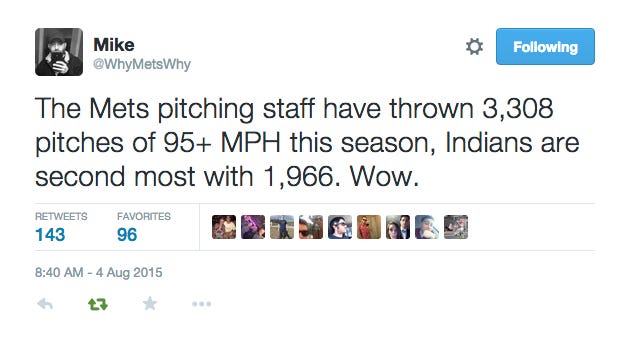 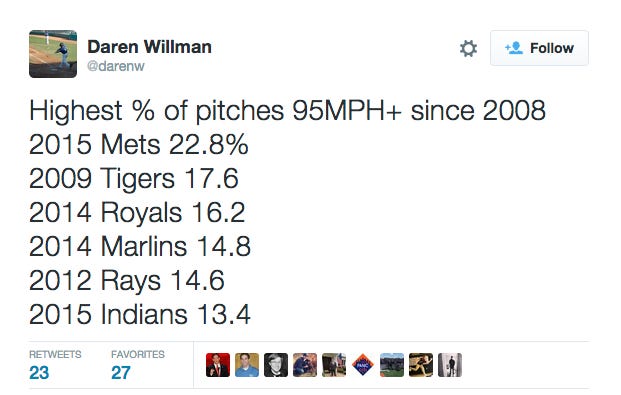 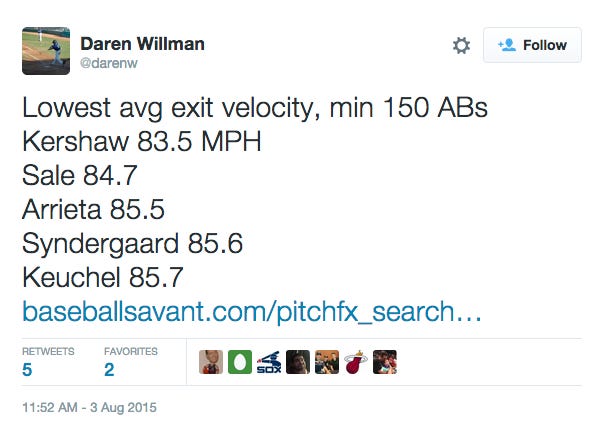 I didnt believe some of these stats when I saw them. Particularly the one about the number of pitches over 95 MPH. I mean they are BLOWING the league away. All of them. From Syndergaard Harvey and Degrom to Familia these dudes are all throwing GAS. Syndergaard’s stat the other day was simply unreal. Dude averaged 97.7 MPH for his entire outing against the Nats. From 1st inning to 8th inning, not even when he was dialing it up, just on average, he was hitting 97.7. How are you supposed to do anything with that over the course of 8 innings? Thats some 6 foot 6, 240 pounds, big arm, man pitching right there.

Love seeing three of the last 4 World Series appearances were from the hardest throwing teams. But then you look at the other tweet with highest percentage of 95mph+ and you see teams like the Marlins and Indians in the mix, so its obviously not an automatic shoe in just because you throw hard. Obviously big leaguers can hit fast pitches, but its clear this Mets rotation arent just up there Farnsworth’ing. Its not like these guys are just throwing straight down the middle at 98. They arent just throwers. They are pitchers. And they’re what appears to be polished pitchers, even though Syndegaard is 22 and has been here for like 15 minutes. And then my favorite part of the rotation is the Change Up, Bartolo Colon. I might change his nickname from Big Sexy to The Change Up. Just the same way as you see a pitcher throw 95 MPH and then the next pitch is an 80 MPH change up, thats Big Sexy but on a more macro level. Instead of pitch to pitch change ups, this is game to game. All series long you are seeing fireballs and then you get to Tolo and he’s just throwing 90 MPH junk on the edges.

And if Niese and Tolo are gonna be throwing gems like they did the past 2 starts, you can forget about it. This team might win the division by 20 games. And dont give me that “It was against the Marlins” nonsense. Thats the whole point. Your 4th and 5th starters shutting down these teams that you absolutely need to beat so that when the rotation turns over and its back to Harvey and you’re facing a more respectable team, you’re already on a winning streak. I mean right now the Mets have won 5 straight with Harvey, deGrom and Syndergaard up next. As long as Harvey can shake his Marlins jitters you’re looking at a very attainable 8 game win streak. Now that there’s enough offense and confidence that you dont have to genuinely be worried about putting up ZERO runs every night, theres every reason to expect this team to rattle off win streaks. 8-2 over their last 10. Always expecting 2 out of three. Gunning for sweeps regularly. Thats what happens when you are FAR AND AWAY the hardest throwing staff in baseball (And can score a few runs). Not a rotation in the world I would give these guys up for. Not even close.

PS – How about in comparison to the Phillies:

22! Twenty. Two. I know the Phillies are a dumpster fire but that is just embarrassing. Noah Syndegaard probably threw 22 pitches 95MPH+ in 2 innings of his last start.

Update: It sounds like Jayson Stark was joking, which obviously makes a lot more sense. Sad for Phillies fans that it seeemed believable.